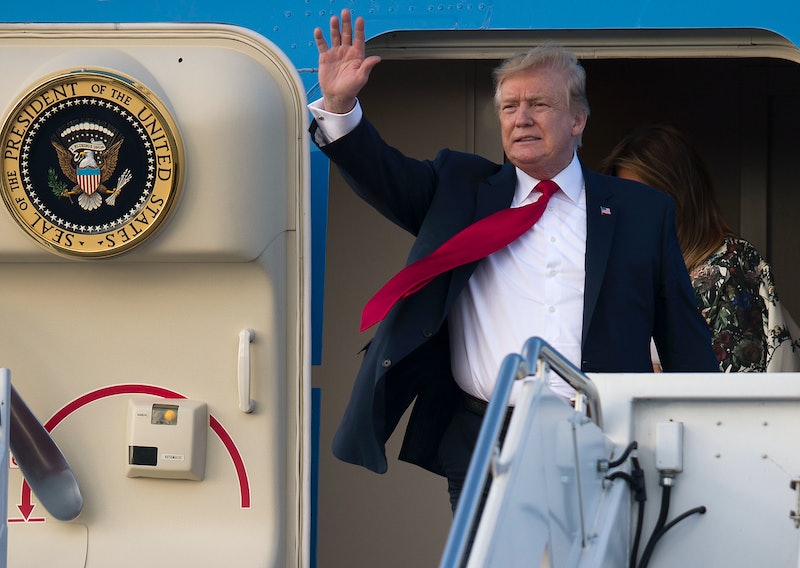 While President Donald Trump once claimed special counsel Robert Mueller's report represented a "total exoneration" of him, it seems as if a number of Americans may disagree. In fact, according Reuters, Trump's post-Mueller report approval rating sits at a record low for the year.

Trump's approval rating fell 3 percentage points after a redacted version of the Mueller report was made public earlier this week, hitting the lowest level seen so far in 2019, according to a Reuters/Ipsos public opinion poll released Friday. Just 37 percent of adults said they approved of the president's performance, Reuters reported.

According to the news outlet, Trump's approval rating has continued to drop steadily since Attorney General William Barr first released a brief summary of Mueller's report in March. At that time, the president's approval rating rested at 43 percent, Reuters reported, noting that by April 15 it had fallen to 40 percent.

According to Reuters, the latest Reuters/Ipsos public opinion poll is the first national survey to have gauged the president's approval rating since the Mueller report's release. It was conducted from Thursday afternoon, shortly after the Justice Department made the nearly 500-page report public, to Friday morning.

A YouGov poll also released Friday showed just 23 percent of respondents said they "strongly approved" of the way Trump was handling the job of being president while 17 percent "somewhat approved," making the president's overall approval rating 40 percent. In contrast, 40 percent of survey respondents said they "strongly disapproved" of the president's performance while another 11 percent "somewhat disapproved," for an overall rating of 51 percent. A separate YouGov poll conducted the day before the Mueller report was released found Trump's approval rating to be 41 percent.

FiveThirtyEight, which weighs several polls — including those from Reuters/Ipsos and YouGov — to track the president's estimated overall approval rating, has reported that Trump currently has an approval rating of 41.6 percent. The website estimated Trump's disapproval rating resided at 53.2 percent.

The Reuters/Ipsos poll released Friday also found that while a majority of respondents did not think Trump should be impeached, they do thing he should resign. According to the poll, 42 percent of adults felt that the president should not be impeached, compared to the 40 percent who thought he should be and the 18 percent who weren't sure. When it came to whether or not Trump should resign, however, 47 percent of respondents reported feeling like the president should step down while 37 percent felt he shouldn't. Seventeen percent of respondents reported being unsure.

The poll also found that a majority of people — 50 percent to be exact — believe that either Trump or someone from his campaign had worked with Russia to influence the 2016 election. In contrast, 34 percent did not believe there had been any collusion between Russia and the Trump campaign.

On Friday, Trump went from claiming the Mueller report signaled "total exoneration" to arguing that some parts of it "are total bullshit."