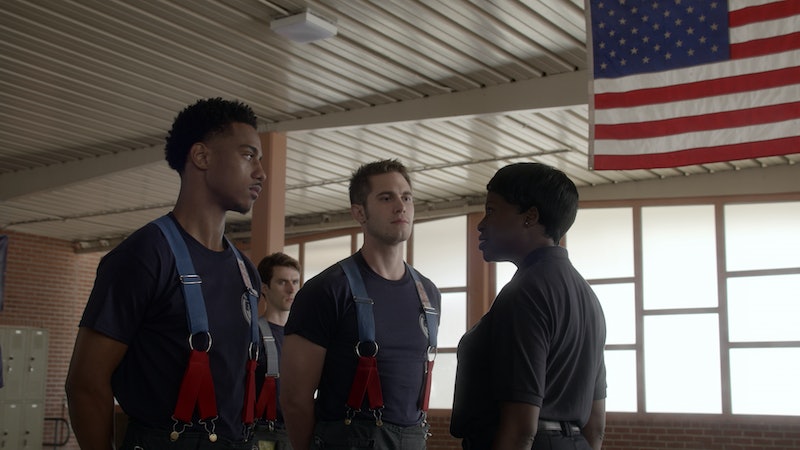 Spoilers ahead for Season 1 of Netflix's What/If. Anne Montgomery's mysterious night with Sean may have shaken up he and Lisa's marriage, but there were secrets between them long before the high-powered investor came along. Anne knows what Sean and Todd did all those years ago, and she's hell-bent on exploiting it for her own personal gain.

Throughout the Netflix thriller's 10-episode first season, we see flashbacks to Sean's past. It's mostly dark, shadowy glimpses of him beating up some dude in a parking lot, but slowly, it all comes together. Remember Sean's ex-girlfriend, Maddie, who suspiciously shows up right as Anne Montgomery enters Sean and Lisa's lives? As you may have guessed, Anne intentionally hired her to work the cocktail party she invites Lisa to after she and Sean sign on the dotted line for her weird, Indecent Proposal-style deal. Maddie is but a pawn in Anne's continuing effort to make Sean atone for his past, leaving Lisa to live up to her full potential — because, as Anne sees it, Sean is holding Lisa back. But more on that later — for now, back to Sean and Todd.

About three years after high school, when Sean and Maddie were still together, a drug dealer attempted to rape Maddie in a back alley. Sean intervened, pulling the guy off of her and beating him up. When the dealer then threatened to assault Maddie again the next time he saw her, Sean swung a baseball bat and killed him in a rage.

Todd helped his friend cover up this crime, and Sean quit baseball and devoted his life to trying to help people. He and Todd basically got away with it until Anne confronts him all these years later, and the guilt becomes too much for him to bare. As Lisa's company takes off, Sean worries the truth about his past will come out and end up ruining her future, so eventually, he goes to the police station and turns himself in, letting Anne get what she wants.

You might be asking what Anne's motivation is here. What does she care what happens with this random couple? Well, as it turns out, Anne is actually Lisa's biological mother, and has been keeping tabs on her since she was born. She somehow finds out about the murder (even before the police can solve the case), and when she asks for a night alone with Sean, she makes him confront his violent instincts and asks him to leave Lisa. When that doesn't work, she brings Maddie back into his life to try and spook him. When Sean still won't leave Lisa, Anne provides Maddie with enough drugs to ensure she overdoses and dies. After that, not only does Sean's guilt reach a breaking point, but cops investigating her death start looking at him too.

Todd, on the other hand, seemingly gets off with his part in covering up the murder. That's honestly fine, as he and Angela end up with their own set of terrifying problems. However, the violence in Sean and Todd's past unfortunately doesn't end there. We also learn, though flashbacks and video footage, that Todd has an abusive father. Sean got in a fight with him while trying to save his friend, too. In the end, Lisa's brother Marcos is able to get Sean off, and he and Lisa try to start over.

Does Sean have anger management issues? Definitely. Is he a monster? Not as much as Anne Montgomery wants him to think.

More like this
Nicola Coughlan Shared A Lady Whistledown Excerpt From ‘Bridgerton’ Season 3
By Grace Wehniainen, Alyssa Lapid and Sam Ramsden
Devi Is Going To Meet A “Smoldering Bad Boy” In ‘Never Have I Ever’ Season 4
By Jack Irvin and Gabrielle Bondi
New ‘Lupin’ Part 3 Teaser Hints That Assane Will “Go Out In Style”
By Brad Witter
The ‘You’ Season 4 First Look Shows Joe’s New Identity And Potential Victims
By Bustle Editors
Get Even More From Bustle — Sign Up For The Newsletter