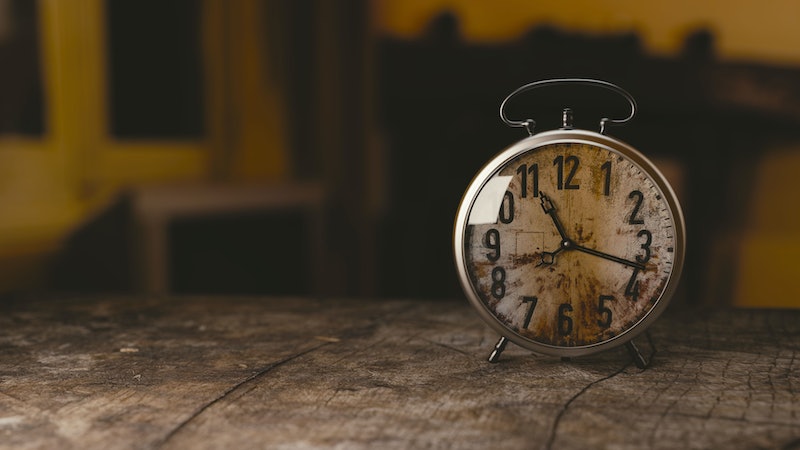 If you've heard that the Doomsday Clock has been set closer to midnight, you likely have a few questions. To begin with: What is the Doomsday Clock, anyway? And why do we care where it's set? Well, the Doomsday Clock has a pretty fascinating history, especially for those of us who are into the parts of life that resemble a sci-fi movie or dystopian novel — and given how the current state of the world is looking, it's more relevant than ever.

In basic terms, the Doomsday Clock represents how close we are to the end of the world. Midnight represents not the actual hour of the clock, but how close we are to a catastrophe that could destroy mankind as we know it. You know, casual stuff. On Jan. 26, it was moved 30 seconds closer to midnight; the Doomsday Clock is now two and a half minutes away from midnight.

So, who operates the Doomsday Clock, and who created it? Scientists, of course. The Doomsday Clock goes back to 1947, when a group of scientists from the University of Chicago who worked together on the Manhattan Project — which was responsible for creating the first atomic bomb — produced it. These days, the Doomsday Clock is managed by the Science and Security Board of the Bulletin of the Atomic Scientists.

The "time" on the clock, and how close we are to "midnight" (that is, catastrophe) changes depending on the current events of the world. Back in 1947, the scientists set the clock at seven minutes until midnight. The furthest from midnight we've ever gone is 17 minutes 'til midnight, which was in 1991, just after the Cold War finally ended.

Now, though, the clock has changed again, and the news is sobering: According to the Telegraph, we're just 30 seconds away from the closest we've been to midnight since 1953, when the United States made the decision to upgrade its nuclear arsenal with the hydrogen bomb. Given that the clock was originally created to remind people of how serious threats of nuclear war are, and the catastrophic impact on Earth and humanity these wars can have... well, it's no laughing matter.

It's unusual, though, for the clock to move less than a minute at a time; indeed, this is the first time it's ever happened. Explained the Bulletin of the Atomic Scientists in a statement, "The board's decision to move the clock less than a full minute — something it has never before done — reflects a simple reality: As this statement is issued, Donald Trump has been the U.S. president only a matter of days." He hasn't had a lot of time yet to take action, so a full minute isn't warranted.

But the fact that the clocked moved when it did is also telling: It means that, when it comes to looking into the future, the signs right now aren't good. The Bulletin went on to discuss President Trump's "disturbing comments" about the use of nuclear weapons, as well as his perspectives on climate change, cyberthreats, and the rise in nationalism, concluding, "In short, even though he has just now taken office, the president’s intemperate statements, lack of openness to expert advice, and questionable cabinet nominations have already made a bad international security situation worse." Unsurprisingly, all of these factors contributed to the notion that we are inching toward the end of humanity as we know it.

But don't panic just yet: The Doomsday Clock, as all other things in life, can change based on a wide variety of factors, none of which are ever immovable or fixed. So, we can keep up hope that we might see a big improvement and a forecast for happier times — provided that our current political and social climate reflect a move in that direction.