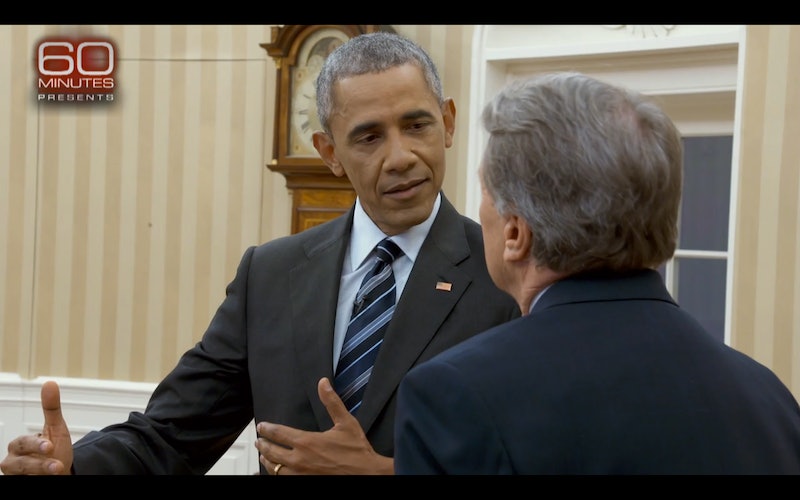 During an interview with Steve Kroft on CBS' 60 Minutes on Sunday, outgoing President Barack Obama briefly reflected on the legacy of the Affordable Care Act (ACA). Interestingly, Obama hinted that his outlook on healthcare in the United States is surprisingly optimistic, even amidst consistent threats from the GOP to repeal Obamacare.

During the interview, Kroft asked Obama what he would be remembered for following his presidency. In addition to mentioning his positive impact on the economy and clean energy standards, Obama also expressed that he believed his administration had shifted healthcare paradigms in the United States. He went on to suggest that the impact of this shift would be felt long-term, even in spite of Republican threats to dismantle the ACA. More specifically, Obama stated:

I think we've set the bar with respect to the notion that it is possible to provide health care for people. Now I know that the incoming Congress and administration talks about repealing it. But we've set a bar that shows that this can be done. And that core principle is one that the majority of Americans, including supporters of Donald Trump believe in.

Others seem to agree with Obama's assessment of the long-lasting impact of Obamacare. For example, in an interview with NBC News, former Surgeon General Dr. David Satcher indicated that the ACA has shifted Americans' standards for what constitute acceptable practices in the healthcare arena. "I don't believe it will ever be acceptable again to have 50 million people without access to health care," he added.

According to NBC News, the ACA helped put in place additional key healthcare principles with wide public support in the United States that Republicans will be unlikely to violate, even as they pursue an ACA repeal. These principles include making sure that people with medical problems can get health insurance as well as having the government assist people who cannot afford their health insurance premiums. Now, questions around healthcare in the United States do not center around if, but how these principals should be enforced reflects a lasting impact of the ACA even if it is repealed.

Thus, the ACA has left a permanent legacy by shifting the metric by which Americans measure whether or not healthcare coverage is acceptable in their country. This legacy should hopefully outlast even a (highly unfortunate) ACA repeal.

Indeed, while the Trump administration and Congressional Republicans' specific plans for a potential ACA replacement remain to be seen, the fact that President-elect Trump has publicly acknowledged that he intends for his replacement plan to include affordable insurance for all Americans via a plan developed by the government does, at least, part ways with previous Republican administrations. And with any luck, that new plan will reflect some of the ACA's guiding principles.

In sum, despite the very real and regrettable threat to the ACA, perhaps some of Obama's optimism is derived from recognizing that his landmark healthcare legislation has changed the core beliefs about healthcare in the nation. Even if a repeal does occur, it's possible that the country's healthcare status won't revert entirely back to what it was pre-ACA. That particular legacy is commendable in itself, as are, of course, the many additional successes of the Affordable Care Act.