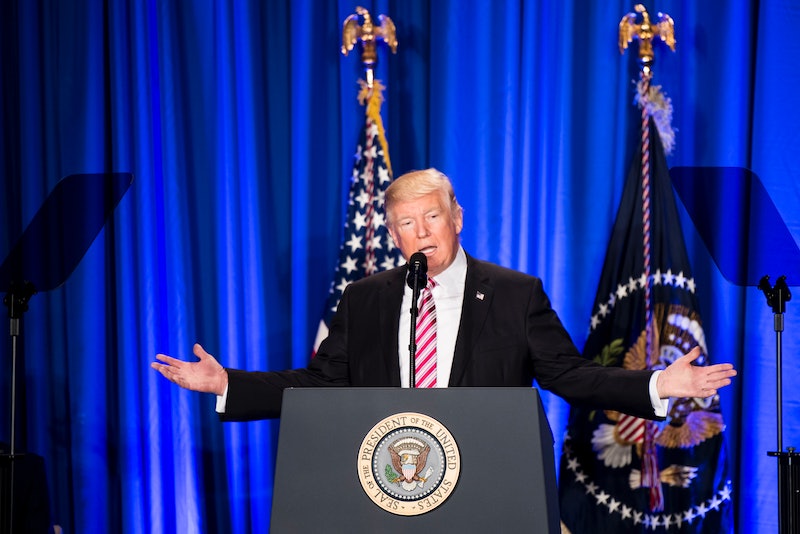 In an attempt to depict himself as a man of action, President Trump issued a flurry of executive actions during his first days in office. They address everything from abortion funding to construction of a border wall. But when will Trump's executive orders take effect? The answer is complicated — in part because a lot of the orders don't actually do all that much.

In the strictest legal sense, the executive orders will be implemented immediately: They are published in the federal register as soon as the president signs them, and government is legally required to carry them out at once. Practically, though, it's much more complex than that. Not all of Trump's recent executive actions will take effect immediately, for two reasons.

To begin with, there's a big difference between executive orders, of which Trump has issued four, and presidential memoranda, of which he's issued eight. The media has been conflating the two, but they are different legal instruments that impose different obligations on the federal government.

Second, most of the executive orders that Trump has actually issued aren't really all substantive. Their instructions don't amount to much, and certainly not the the kind of things that can "take effect" immediately.

Let's first talk about the distinction between executive orders and presidential memoranda. In many senses, they're the same: Both are documents signed unilaterally by the president that direct the federal government to take some course of action or another.

But they're different in many ways as well. The biggest difference for our purposes is that executive orders are automatically published in the federal register after they're signed, thus giving them the immediate force of law, while presidential memoranda aren't. Memoranda are only published in the register at the president's discretion — until then, they're merely non-binding guidelines.

So far, Trump has signed executive orders that ostensibly do the following things:

In addition, he's issued presidential memoranda intended to do the following :

You'll notice that some of the most high-profile of Trump's actions are actually memoranda, not orders. And only three of those memoranda have been entered into the federal registry: the hiring freeze, Mexico City policy, and TPP withdrawal. As such, those are the only three memoranda that are actually legally binding. The other ones, including the one expediting DAPL, are still mere guidelines, not laws.

Now, onto the orders. Much like Trump himself, the recent executive orders are superficially bombastic but ultimately lacking in substance.

Take the Obamacare one. It orders agency heads to "waive, defer, grant exemptions from, or delay the implementation" of any part of Obamacare that imposes "a fiscal burden on any State or a cost, fee, tax, penalty, or regulatory burden" on Americans or health care providers. That may sound restrictive, yet it's all confined to "the maximum extent permitted by law." Obamacare is still the law of the land, so ultimately, this order is pretty toothless.

The order that Trump issued about the border wall is even less consequential. It does not, contrary to some media reports, mandate the immediate construction of a border wall between the United States and Mexico. Trump isn't allowed to do that: A wall costs money, and the president doesn't have the authority to authorize new spending. That's Congress's job, and Congress hasn't done that (yet).

What the order really does is order the secretary of homeland security to analyze the funding that Congress has already approved, and see if any of it was designated for purposes that could conceivably be interpreted as "building a border wall." The Intercept's Jon Schwarz likened this to " looking under the federal budget’s sofa cushions for spare change." It may free up some funds, but there's no way it's going to amount to the $38 billion that a border wall will cost.

The one exception to all of is the order about sanctuary cities, which could potentially take place immediately and deprive cities with lax immigration enforcement of federal funds. But there are very serious questions surrounding the constitutionality of that order, and unless it's implemented very narrowly, the administration will almost certainly be sued over it. Just as importantly, mayors of major sanctuary cities around the country have already pledged to remain sanctuary cities despite the order.

By and large, though, Trump's executive orders don't really do much. They are more expressions of intent than actual policy changes. Sure, they do take effect immediately; it's just that, once they've taken effect, they don't actually do very much yet.