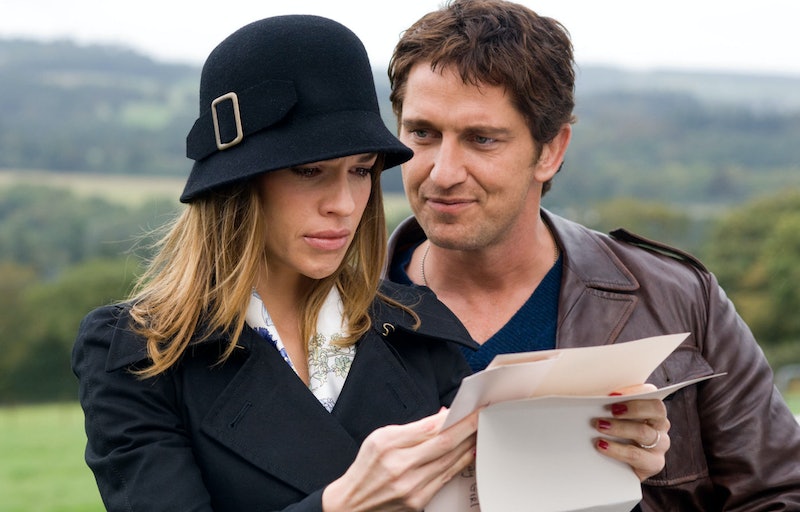 In 2004, a tragic yet wholly romantic novel swept the world. Three years later, it was adapted for the silver screen, causing even more people to sob uncontrollably. Now, author Cecelia Ahern has confirmed that there will be a P.S. I Love You book sequel. And safe to say romance fans across the world are seriously excited.

The Irish literary talent broke the news on Twitter, writing that the sequel was called Postscript and would be published on Sep. 19 in the UK and Ireland. "I hope you’ll welcome back Holly... & Gerry... & that reading it will be as emotional for you as it was for me," she added.

If you've somehow managed to escape the P.S. I Love You hype or need a little plot refresher, here's how things go. The story follows the lives of married couple Holly and Gerry, but not in the way you might think. Sadly, Gerry dies from a brain tumour pretty near the beginning, leaving Holly completely and utterly bereft. But she begins to re-enter the world through a series of comforting and sometimes humorous letters sent by her late husband. Each ends with four simple words: "P.S. I love you." Making it through to the end without shedding at least one tear is an impossible challenge.

Ahern was just 21 years old when the eventual bestseller was released. Since then, she has been busy writing 15 more books, including a recent collection of short stories focusing on all the ways women overcome adversity. With all that success, she's definitelu allowed to have taken this long to come back to her very first novel.

According to the synopsis, the sequel will revisit Holly seven years after Gerry's death. In Postscript (which is the literal meaning of "P.S."), Holly is approached by a group called the P.S., I Love You Club and forced to step outside her safe zone once again.

"Inspired by hearing about her late husband Gerry’s letters, the club wants Holly to help them with their own parting messages for their loved ones to discover after they’re gone," the summary reads. "Holly is sure of one thing — no way is she being dragged back to the grief she has left behind. It’s taken seven years to reinvent herself, and she’s ready to move on with her life. But Holly comes to realise that when you love someone, there’s always one more thing to say…”

In a statement, Ahern described the sequel as "the P.S. to my P.S." She doesn't just want it to be seen as the second book to an international bestseller, but as "a story that stands alone about living in a purposeful life in the face of illness, grief, and loss." If you want to be one of the first ones to read the new novel, you can pre-order it now for £16.99.

So does this mean there could be a second film in the making? The 2007 film quickly became many people's go-to watch. Starring Hilary Swank and Gerard Butler as Holly and Gerry, it also featured plenty of other famous faces including Lisa Kudrow, Kathy Bates, and a brief appearance from The Walking Dead's Jeffrey Dean Morgan. (I will never get over how one actor could transform from sweet sweet William into the head-crushing monster that is Negan.)

Well, there hasn't been any word on that yet and probably won't be for some time. However, it's safe to say that Butler may not be too keen on returning as Gerry. And the reason isn't because his character has been dead for the past seven years. No, he has ruled out taking on an Irish accent for the foreseeable future.

As The Irish Sun reports, the now 49-year-old actor was heavily criticised for his accent in the film. (There is a misconception that Butler is Irish in real life, but he's actually Scottish.) When asked if he would ever play an Irish role again, Butler told the paper: "After all those wonderful reviews and glorious feedback, I don’t think that would be a good idea. I’ve ticked that box."

Here's hoping Swank is still up for a sequel.