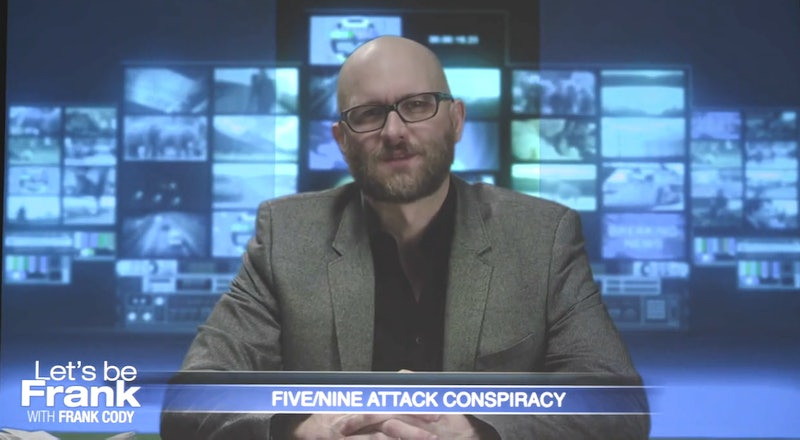 Mr. Robot follows characters that live on the fringe. Elliott Alderson lives on the outer edges of society, working with hackers who have radical ideas about how to redistribute the wealth in America. In the background, Mr. Robot has introduced Frank Cody, another fringe figure. You may remember that Cody (played by Erik Jensen) first appeared in Mr. Robot Season 2, appearing on screens across post-Five/Nine New York, but what is the story behind this charismatic conspiracy theorist?

Cody has his own news talk show, aptly titled Let's Be Frank With Frank Coy. Though he seems to be much more mainstream than most, it's very likely that the Cody character is meant to evoke real bloggers and hosts who share their government conspiracy theories on YouTube and in far-right publications. (His blue set evokes the similarly shaded background on Alex Jones' InfoWars, it can be argued.) From the loud rants to the theories about the government conspiring against the common man, a voice like Cody's probably sounds all too familiar to a 2017 audience.

While the general public seems to deride "truthers" like him, an individual on Mr. Robot committed murder in the name of the "truth" presented by Cody. And while the murder may not be justified, there is a chance that Cody's understanding of the world post-Five/Nine isn't all that inaccurate. The craziest thing about this conspiracy theorist is that — much like how a broken clock is right twice a day — Frank Cody may be right about part of the Five/Nine hack.

Cody seems convinced that the entire Five/Nine hack was constructed by the powers-that-be to push the world into a totalitarian state. A strike at fictional company Comet Electric, which led to blackouts across the United States, contributes to Cody's belief that the secretive establishment seeks to "take away your power and I'm not talking about your electricity! I'm talking about your computers, your access to the internet, your phone! What's that all add up to? Information." Cody believes that the rulers of the world are trying to suppress people's access to information, which would keep them from learning what Cody believes to be the truth about Five/Nine.

Cody is convinced that Five/Nine is a large-scale crisis performance. While the term "crisis-performance" doesn't seem to be used in the real world, it's a stand-in for the real conspiracy term "false flag," which is means, according to The Atlantic, "any scenario under which a military attack was undertaken by a person or organization pretending to be something else." Truthers have called real catastrophic events such as 9/11 and the tragedies at Sandy Hook and Charlottesville "false flag" events. Conspiracy theorists also believe that these events involve "crisis actors," or hired hands that serve as fake victims of the manufactured tragedy.

These online conspiracy theories have real-world consequences, as seen in the first episode of Mr. Robot Season 2. Gideon Goddard, the former CEO of Allsafe and one of the few people that Elliot believes to be a good person, is killed by a conspiracy theorist who believes him to be a "crisis actor" that contributed to the Five/Nine hack.

The truth is that Five/Nine was not a false flag event. The people who are living in poverty in the wake of the hack are not crisis actors. fsociety is real, and far from the secret covenant of government organizations that Cody believes them to be. However, The Dark Army, who helped fsociety with the hack, does have strong ties to the Chinese government, who has strong ties to E Corp. Perhaps the powers-that-be knew that the hack would actually help E Corp and allowed it to happen.

While the Five/Nine hack wasn't manufactured by a shadowy government, it was allowed to happen by people in power. Cody may now be right about the "who" or the "how" of the hack, but he could be right about the "why." Five/Nine didn't redistribute the wealth and create a better world like Elliot thought it would, but it's possible that the results were exactly what E Corp expected. Cody is just like Elliot: believing that there the world is controlled by the top 1% of the top 1%. However, this host is an example of what happens when those conspiracy theories are released into the Mr. Robot world without consideration for who they may affect, leaving good people like Gideon Goddard dead.