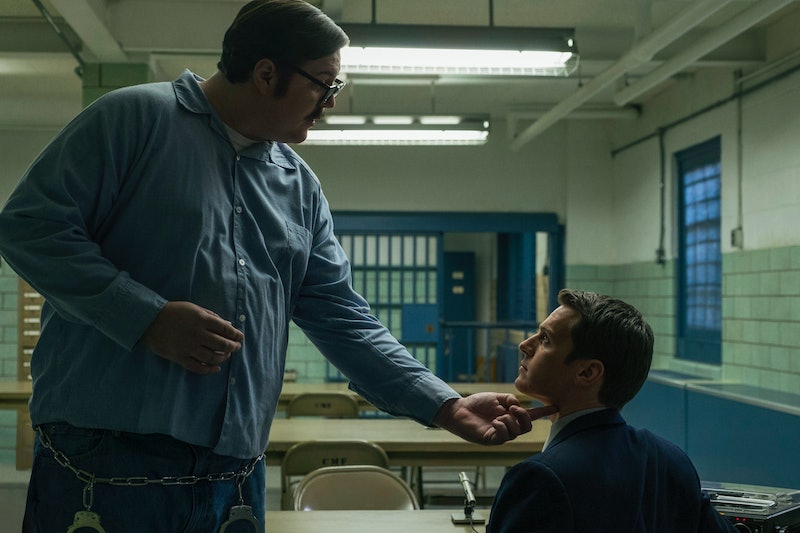 If you're a fan of true crime, you may want to check out the new Netflix series, Mindhunter. This new drama follows the story of two FBI agents on a mission to better understand serial killers. And to do that, they interview these criminals in person, traveling across the country to interview everyone from Edmund Kemper to Ted Bundy. But who is Holden Ford from Mindhunter?

Ford, played by Glee's Jonathon Groff, is one half of the duo of FBI agents looking to develop a criminal profile for serial killers. His partner is Bill Tench, played by Holt McCallany. Ford is the central character of the show, and the narrative follows him as he has encounters with serial killers, and fights within the Bureau to have his work recognized as a worthwhile pursuit.

But Ford isn't an entirely fictional creation. The character is based off the real-life FBI agent John Douglas. In fact, the whole series is based off a book that he cowrote with Mike Olshaker, titled Mindhunter: Inside the FBI's Elite Serial Crime Unit. The book chronicles the work that Douglas did with his partner, Robert Ressler (and the inspiration for Tench) to attempt to get a better understanding of the motives and psychology of some of the most notorious criminals in American history.

The results of this work, fictionalized in Mindhunter, were groundbreaking. As reported by The New Yorker, Ressler and Douglas were able to conclude that serial killers could largely be lumped into two categories: "organized" and "disorganized." If a killer was "organized," it meant that they picked out their victims carefully beforehand, and plotted out the details of the crime. If they were "disorganized," it meant they often grabbed a victim at random. This allowed the pair to draw some conclusions about what these two different kinds of serial killers might look like, or what their lifestyle was like. For example, as explained in the same New Yorker piece:

Each of these styles, the argument goes, corresponds to a personality type. The organized killer is intelligent and articulate. He feels superior to those around him. The disorganized killer is unattractive and has a poor self-image. He often has some kind of disability. He’s too strange and withdrawn to be married or have a girlfriend. If he doesn’t live alone, he lives with his parents. He has pornography stashed in his closet. If he drives at all, his car is a wreck.

From these characteristics, investigators would then be able to develop a criminal profile for a suspect based on the nature of the crime scenes and victims they chose. And, since Mindhunter has already been renewed for a second season, viewers might get to see the effects of the work that the fictional Ford and Tench undergo in Season 1 on law enforcement tactics.

By following the fictionalized Holden around the country as he interviews serial killer after serial killer, Mindhunter affords audiences the opportunity to get an intimate look at what these conversations were like for the real-life Douglas. But Holden Ford is far from the first fictional portrayal of the prolific John Douglas. According to The Atlantic, Douglas has served as the inspiration for famous characters such as Jason Gideon from Criminal Minds, and Jack Crawford in the Oscar-winning film Silence of the Lambs. And it makes sense that this pioneer would spark the imaginations of so many creators, and the fascination of so many audiences. He's been able to pick the brains of people who committed heinous crimes that fascinated all of America, to understand what makes them tick, what motivates them to kill, and how to identify the patterns of new killers. His life makes for as compelling a crime drama as any work of pure fiction.