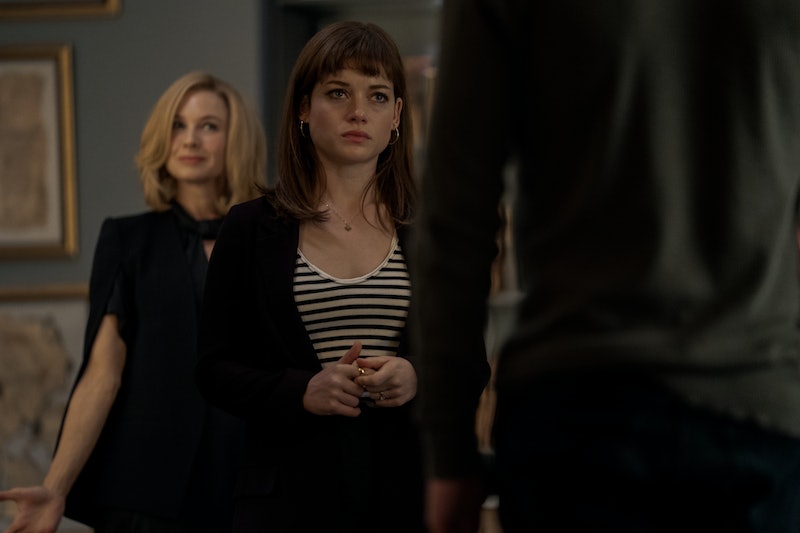 Spoilers for ahead for Season 1 of Netflix's What/If. Netflix's new Indecent Proposal-esque thriller, What/If, follows a young married couple whose life is turned upside down when an enigmatic investor makes them an offer they can't refuse. Desperate to secure funding for her med tech startup, Emigen, Lisa (Jane Levy) agrees to let Anne Montgomery (Renée Zellwegger) spend a night alone with her husband Sean (Blake Jenner) — and never reveal to her what happened between them, or else forfeit her company. At first, it seems like it's just a weird sex thing, but when it's revealed that Anne has a whole murder-board with newspaper clippings and pictures of the couple, it becomes clear it's them, not the company, she's interested in. Why, then, is Anne stalking Sean and Lisa? What exactly does Anne want? Buckle up, because it's a twist-filled ride.

As it turns out (cue the dun dun duns), Anne is Lisa's biological mother. This is revealed in the penultimate episode. When Anne was younger, she was raped by her building super — a man she trusted who then took advantage of her. When Anne's mom found out she was pregnant, she kicked Anne out, so she gave Lisa up for adoption in exchange for money, seeing it as her ticket to make something of herself. Then, Lisa was adopted a second time by her nanny when the people she thought were her parents died in a fire. Anne has been watching her for her entire life, but only decided to make contact now.

But what Anne does to Lisa is pretty maniacal — yes, she invests in her company, but she basically rips apart her marriage along the way. Why would she torture her own daughter? To make her a strong business woman, it seems. Anne says she thinks the family that raised Lisa made her weak and trusting — so she wanted to hurt Lisa in order to make her strong and ruthless, like her.

It's no surprise that, when Anne finds out that Sean murdered a man before meeting Lisa, she doesn't want him around her daughter (though in his defense, he was protecting his girlfriend at the time, as the man he killed was trying to rape her). Still, there are a few loose threads: why did it take Anne so long to interfere in her daughter's life? When and how did she find out about Sean's past, if even the police hadn't solved the case? And why intervene at this specific moment? Maybe she was just waiting for the opportune time to strike, and this so happened to be it.

The plan does seem to have worked, even if Lisa ends up out-scheming Anne. When Sean tells Lisa what really happened between him and Anne that night — that she asked him to leave her — their contract is broken, and Emigen becomes Anne's. She sells the company, but Lisa is one step ahead of her — she leaks Emigen's technology to the public, making it essentially worthless and framing Anne for fraud. Anne is forced to fake her own death and skip town, and Lisa turns Emigen into a non-profit. She and Sean decide to start over, too.

So to a degree, Lisa has been made stronger and more ruthless by the experience, but she'll never be as callous and hardened as her mom. In the end, she gets everything she wants, and gets Anne out of her life (hopefully) for good. If that's as close as What/If gets to a happy ending, we'll take it!

More like this
Devi Is Going To Meet A “Smoldering Bad Boy” In ‘Never Have I Ever’ Season 4
By Jack Irvin and Gabrielle Bondi
New ‘Lupin’ Part 3 Teaser Hints That Assane Will “Go Out In Style”
By Brad Witter
Nicola Coughlan Shared A Lady Whistledown Excerpt From ‘Bridgerton’ Season 3
By Grace Wehniainen, Alyssa Lapid and Sam Ramsden
The ‘You’ Season 4 First Look Shows Joe’s New Identity And Potential Victims
By Bustle Editors
Get Even More From Bustle — Sign Up For The Newsletter