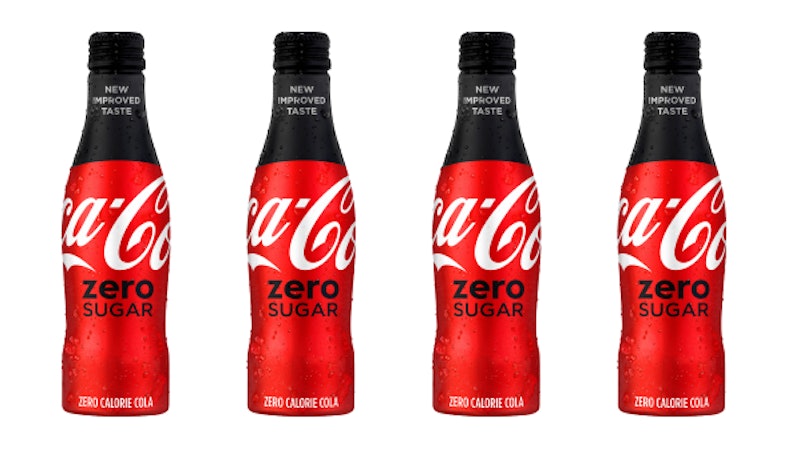 Say your goodbyes, friends. Twelve years after it was introduced, Coke Zero is going away. Now, what was originally marketed as an alternative to Diet Coke is being replaced by a new, different product: Coke Zero Sugar.

Sure, to the untrained eye it may seem like Coke just poured some Coke Zero in a red bottle and added the word "sugar", but company executives are calling the product a "reinvention" of Coke Zero, with a new recipe that supposedly tastes much more like the standard, full-sugar Coke.

In a press release, Coca-Cola said they've spent over a year developing and perfecting the new formula.

“We’ve used our in-house innovation capabilities to make the great taste of Coke Zero even better and a lot like a Coke," said Stuart Kronauge, the senior vice president of Marketing for Coca-Cola North America, "To achieve this, we optimized the unique blend of flavors that gave Coke Zero its real Coca-Cola taste in the new and improved Coca-Cola Zero Sugar recipe. It’s delicious, refreshing and our best-tasting zero-sugar Coca-Cola yet.”

The updated packaging will also be closer to the original, iconic red can, as opposed to Coke Zero's signature black can, in an attempt to unify the company's vast portfolio of beverages.

According to Business Insider, CEO James Quincey told investors in a call that the name "Coke Zero Sugar" is intended to help customers, many of whom reportedly "don't understand that Diet Coke and Coke Zero don't contain any sugar."

Coke Zero Sugar is not entirely new. The sugar-free soda is already popular in Great Britain, Mexico, the Middle East, and Latin America.

Coca-Cola hopes the new product will boost their diet soda business in the U.S. In 2016, Coke Zero sales only increased by 3.5 percent and Diet Coke sales dropped by 1.9 percent in the U.S., whereas Coke Zero Sugar sales reached double-digit growth outside the country.

Still, with the news breaking about the elimination of Coke Zero, many took to Twitter to express their concern and confusion as to how the two products are different.

In any case, rest in peace, Coke Zero. Fans can stock up through August, while supplies last.