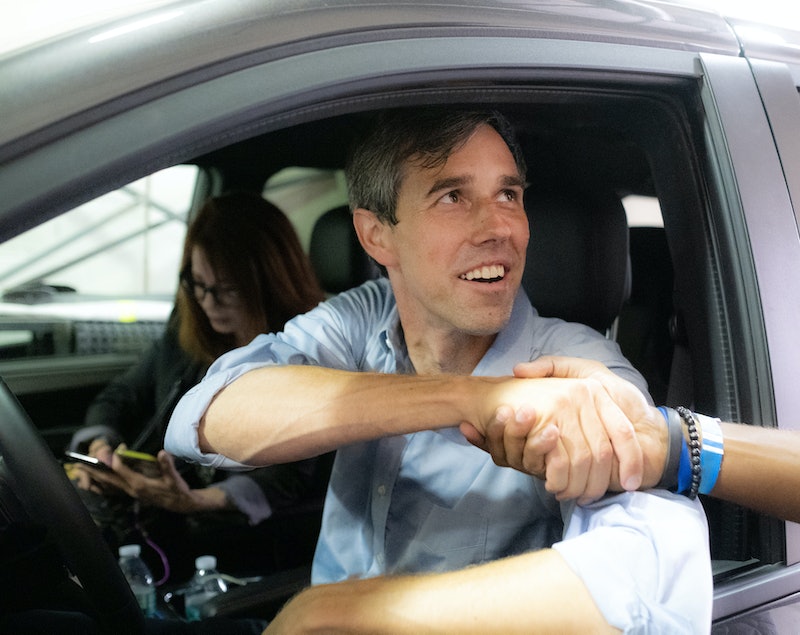 As of May 2019, 14 Democrats have announced that they are officially running to be the party's nominee for the 2020 presidential election. One of them is Robert Francis "Beto" O'Rourke, the progressive congressman who made blue waves when he ran for senate in Texas against incumbent Ted Cruz in 2018. A new documentary called Running with Beto, airing on HBO on May 28, chronicles his senate run, including his visit to all 254 counties in Texas. The doc explores the realities of running for office, showing that plans don't always come to fruition, and that candidates aren't on a popularity tour, often coming face to face with detractors. Director David Modigliani says that he didn't make this film to convince viewers to like O'Rourke or even vote for him. He'd rather you be inspired to become more politically involved yourself.

Perfection and likability are nebulous qualities we seem to be demanding of our candidates lately, particularly the female ones. But, Modigliani continues, "If there's any sort of mission behind the film it's that you don’t have to be perfect to run for office, you don't have to be an expert to be a part of a political campaign, and it's never to early or too late to be a part of the democratic process."

O'Rourke himself has been involved for years, having been born into a political family in El Paso, Texas. His father worked as County Commissioner and County judge. O'Rourke served on the El Paso City Council for six years before running for the U.S. House of Representatives in 2012 and winning, spending six years in the House before making his bid for Senate. But his experience and pedigree don't make for a completely smooth campaign, which proves Modigliani's point.

For O'Rourke, it's been a long road. Which is why the film is not shy about featuring some of his less-than-perfect moments. There are times when he messes up on the campaign trail, forgets names, and scolds his campaign staff. His home life is loving, but often weighed down with stressors, with his kids occasionally crying when talking to their father on the phone or hiding from Modigliani's camera. In his absence, O'Rourke's wife Amy is left to pick up the pieces.

"We wanted to make an honest film about the thrills and [real] challenges of running a campaign like this and what its really like to run for office, warts and all," Modigliani says. "Including the sacrifice of the candidates' families, including the stress of any contained chaos, including the learning curve of senior staff who are new to politics. The last thing I wanted this film to feel like was a puff piece or a hagiography of Beto."

To capture all of those aspects, Modigliani also followed three of O'Rourke's campaign volunteers. Marcel McClinton, a 17-year-old gun safety activist and survivor of a church shooting provides a Gen Z perspective. Amanda Salas, a gay Latina who used to be a Republican, fights to get her community registered to vote. And Shannon Gay, whose one-liners and quick wit provide the doc with some of its levity, rounds out the Boomer generation. The three first-time activists were so moved by O'Rourke's campaign, that they decided to become involved supporters.

"I really wanted to capture the people on the ground who were reflective of the different cultures and walks of life in Texas," Modigliani says. "They're also emblematic of the powerful energy that really blossomed in support of his campaign."

The energy Modigliani is referring to is the so-called Blue Wave, a shift to the left prompted by Donald Trump and his administration's policies. It's been credited for progressive candidates like O'Rourke, Stacey Abrams, and Andrew Gillum making strong showings in states that are usually red. Modigliani doesn't want that momentum to stall post-midterms.

"I think that the audiences that are seeing this film for the first time are leaving the theater inspired to reengage in the democratic process," he says. "Progressives working through the 2018 midterms [know it] was exhilarating but also emotionally exhausting. We’re now in a run up to 2020 where people want to get ready to recommit themselves to the project of rescuing our democracy, and it's meaningful to me that this film feels like the beginning of something and not the end of something. We need to leave people feeling energized and recommit themselves to the political process."

And as Modigliani says, that will mean different things to different people, whether it's getting people registered to vote, knocking on doors for a candidate, or even running for office yourself.

More like this
What’s New On Netflix: Ana De Armas’ 'Blonde' & A Nick Kroll Special
By Arya Roshanian
These 25 International Horror Movies On Netflix Prove Fear Is A Universal Language
By Bustle Editors
12 ’90s Movie References You Missed In 'Do Revenge'
By Radhika Menon
Florence Pugh Reflected On Her ‘Don’t Worry Darling’ Experience On Opening Day
By Brad Witter
Get Even More From Bustle — Sign Up For The Newsletter