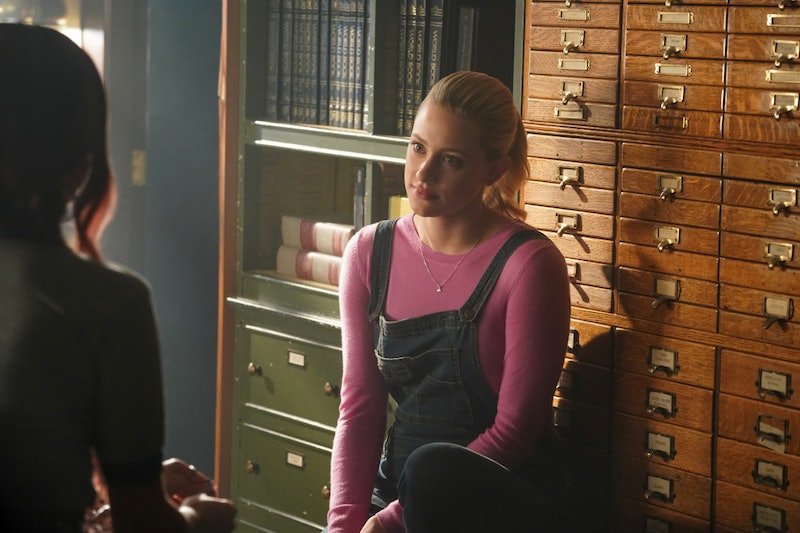 Spoilers ahead for Riverdale Season 3, Episode 20. The Farm has been gaining new recruits at lightning speed — even people you wouldn't have expected, like Cheryl Blossom, have joined the growing cult. But it's always seemed like Betty Cooper was adamantly against it and actively working to take them down. However, circumstances have changed, and she may now be vulnerable enough to fall prey to Edgar Evernever's scheming. The end of the May 1 episode suggests Betty could join The Farm on Riverdale to escape the return of the Black Hood.

Before the Gargoyle King, Riverdale was plagued by another Big Bad: the Black Hood. There were actually two of them, but both were eventually unmasked. Tall Boy was one of them, and he's now dead (because yes, he took up the Gargoyle King mantle, too). But Hal Cooper, Betty's father, was the other Black Hood — and despite his supposed death, he seems to be alive and well. Hal had been gaining Betty's trust for weeks — with her mom Alice in The Farm, Betty didn't really have anywhere to turn, so she started seeing her father in prison. Eventually, Hal convinced Betty to have him transferred to Hiram Lodge's prison.

During the transfer journey, the car carrying the inmates got in an accident and everyone died — or so they thought. All that was identified of Hal was his hand, and the new Black Hood that showed up to terrorize Betty at prom had a hook for one of his hands.

It seems like the O.G. Black Hood, Hal Cooper, is back. But there may be an ulterior motive for him attacking Betty at prom. The return of her serial killer father is what finally pushed Betty into the fold of The Farm. At the end of the episode, she hurried to tell her mother to watch out. "Mom, you have to deal with this. Dad is back and I think he's coming here next, because I told him about your engagement to Edgar and how he plans to adopt the twins. [Dad] was really upset," Betty tells her mother.

The two aren't sure what to do about this new threat, but Edgar "helpfully" steps in. "You stay here. Our walls are strong, Betty, and our members stronger," Edgar says, watching from the doorway. "Let The Farm protect both of you."

After what seems like the world's longest pause, Betty nods in agreement. She's finally in the grips of The Farm — something she vowed she would never be a part of. Perhaps Betty and Jughead were right that Edgar was in cahoots with a serial killer — only maybe it was the Black Hood, not the Gargoyle King. Maybe Edgar arranged for Hal's escape from the prison transport car and, in exchange, Hal needed to scare Betty into joining The Farm. Or perhaps Hal was just pretending to be outraged about Edgar's plan to adopt the twins.

It's also possible that the Black Hood was someone else, though. Conceivably, someone (Edgar) could have heard that Hal's "body" was identified by a hand and used that fact to mess with Betty at prom by using a hook for a hand. After all, this Black Hood seemed like he was really trying to kill Betty, and surely Hal wouldn't hurt his own daughter, right? Well...

When Hal unmasked himself as the Black Hood in Season 2, he asked Alice to record his confession. He told Betty that he wanted it all on tape because he wanted "everyone to understand when they find us." That made it sound like he planned to kill Betty and Alice and himself. And in an interview with Entertainment Weekly, Lochlyn Munro, who plays Hal, said he could see the Black Hood going that far. "In my heart of hearts, I would hope that Hal wouldn’t ever actually [kill Betty]. But obviously, he was very traumatized as a child and how he was brought up," Munro told the outlet. "I want to hope in my heart of hearts that he wouldn’t harm his family, but I'm not sure."

An offhand theory I have, by the way, is that Hal is wrapped up in all the Gargoyle King nonsense too. When the tattoo artist described the person who got the gargoyle symbols on his back, he said he had sandy hair and blue eyes and a "weirdly magnetic" personality. Betty thought he was talking about Edgar, but maybe he was talking about Hal. Although his hair is a little on the darker blonde side, Hal has blue eyes and a magnetic personality. Perhaps he was the one who got the gargoyle tattoos a year ago before he went to prison.

It's hard to say what Hal's motive would be to work with Edgar or the Gargoyle King, or to attack his daughter. But it seems like more than a coincidence that the Black Hood attack had Betty running for safety with The Farm. And with only a hand of his confirmed to be missing, it seems like Hal Cooper really is alive and reprising his role as the Black Hood.

Whether he meant for Betty to respond to his return by joining The Farm or not, that's where we're at. But Betty isn't necessarily all the way in. The synopsis for the next episode on May 8 hints that she's still wary of Edgar and his followers. "Betty raises questions after witnessing some strange activities at The Farm," the synopsis reads.

So while The Farm is providing Betty protection from the Black Hood, they haven't infiltrated her mind just yet. Let's just hope she can hold strong.