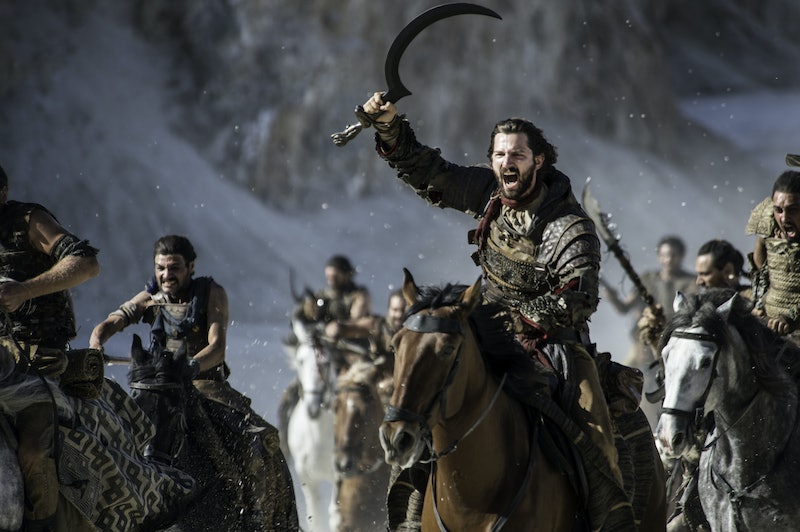 Spoilers ahead for Game of Thrones Season 8. The battle against the White Walkers has seemingly been won, so Daenerys will be back to her one true goal — getting the Iron Throne. With the loss of the Dothraki and many Unsullied, it wouldn't hurt if Daario Naharis returned for Game of Thrones Season 8. The former sellsword for the Second Sons was last seen in the Season 6 finale when Daenerys tasked him with staying and ruling in Meereen. Daario was none too pleased not to be traveling to Westeros with Dany — which seemed to have more to do with his romantic feelings than anything else. And while he had heeded his queen's order up until now, it would be advantageous for Team Daenerys if he went against them now.

Although Daenerys Targaryen and her nephew Jon Snow will have some sorting out of their own to do, the real enemy of Westeros is Cersei now that the Night King is dead. And both of them want to see her off the Iron Throne, no matter if they might disagree which one of them should sit on it (*cough* Daenerys *cough*). But Daario over in Essos is ignorant about Daenerys' new lover and potential rival for the throne. However, what he might know is the fact that the current Queen Cersei hired the Golden Company to help her fight the Dragon Queen.

As Esquire highlighted, there was a fan theory that Daario could be the leader of the Golden Company. But with Harry Strickland leading their arrival to King's Landing in the Season 8 premiere, that's officially untrue. Still, as the person keeping the peace in Meereen with a different Essos sellsword company — the Second Sons — he could be aware of the Golden Company's movements. And hearing that they sailed to Westeros with Euron Greyjoy to fight against Daenerys should be a major red flag.

Daario might think that Daenerys will have no problem defeating the 20,000 men of the Golden Company because she has three dragons and the full forces of the Dothraki and Unsullied armies. But hopefully his cockiness will come into play and he'll feel like he personally has to help her. Because, as viewers know, she's down to two dragons, no Dothraki, and a smaller amount of Unsullied. She did gain the North since the trailer for Season 8 Episode 4 made it seem that the Northerners will willingly join Daenerys now. But Daario's army in Essos would be far more helpful in fighting against whatever Cersei has up her sleeve.

Daenerys really could use Daario's more than he probably even realizes. But if he came to Westeros, he wouldn't want to disappoint her and leave Meereen in chaos. So another fan theory is that rather than sail to King's Landing with the Second Sons, he could have somehow disguised himself at joined the Golden Company. That would mean he's already in Westeros and could emerge to help her when the time comes.

Michiel Huisman has played Daario since Season 4 and he has been quite busy since his time on Game of Thrones ended, notably starring in The Haunting of Hill House. But if this theory turns out to be true, hopefully he carved out a little time to return to Game of Thrones. Because while Daario won't be pleased to see Daenerys with another man, he will be oh-so proud of himself if he ended up helping his queen defeat Cersei Lannister.