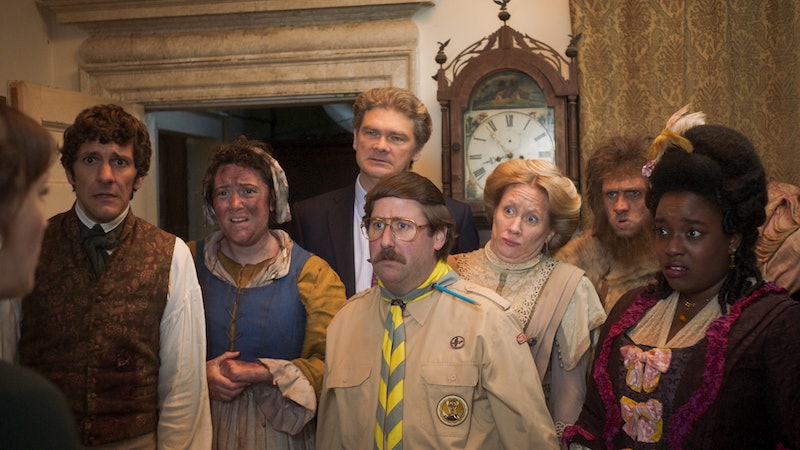 My favourite after-school show when I was growing up was Horrible Histories. While my teacher would struggle to keep my attention, I would run home to laugh and learn more from the CBBC phenomenon. So, when I found out the same comedy group would be creating a show for adults, Ghosts, on BBC One, I could hardly contain my excitement. Packed with dark humour, slapstick comedy, and hilarious characters Ghosts was a hit from start to finish. The only bad thing is it has now to come to an end. So, will Ghosts return for series two?

Series one of Ghosts followed the story of Alison and Mike as she inherits a large country estate from a distant, unheard of relative. Only they aren’t there alone. A jumble of deceased former inhabitants also live in the house and aren’t so keen on Alison’s idea to transform their home into a hotel. After an accident she becomes all too aware of their presence. The show has been hilarious from start to finish and as it airs it’s finale episode in series one on May 20 at 9:30 p.m. fans are starting to question whether it will be back? I reached out to a BBC representative for the show who told me there is “nothing to report at the moment.” But I'll keep you update if the situation changes. Watch this space.

The main cast of Ghosts is made of its creators and writing team. In a statement Ben Willbond who played the Captain said, “we have round-table meetings. Sometimes it’s quite hard because there’s a lot to get through, but I think we’re in a really good place now — it’s delightful to sit around a table and come up with stories and characters.” So, series two would be down to the same ghosts sitting in a room to think up more havoc.

The team behind Ghosts are no strangers to comedy as they have produced and starred in Horrible Histories and Yonderland. Watching the show it definitely has the distinct style of comedy as Horrible Histories — dark one minute, silly the next. Speaking about developing the characters in a statement, Matthew Baynton who is the actor behind failed poet Thomas Thorne said, “we all got really excited about the idea of us playing loads of ghosts! At the time, the idea was that we would play loads of characters each, as we’ve always done.” He continued:

“We came up with loads of funny images and characters, but then when it came to writing the stories we realised they don’t need jobs, they don’t fear death… they’re already dead.”

You can catch the final episode of Ghosts on BBC One at 9:30 p.m. on May 20. I desperately hope this is not the final time that the hauntings of Alison and Mike are on our screens but for now there is no news of a second series. The entire series is available on iPlayer but prepare yourself. While these may not be the scariest ghosts you have ever seen they are certainly the funniest.