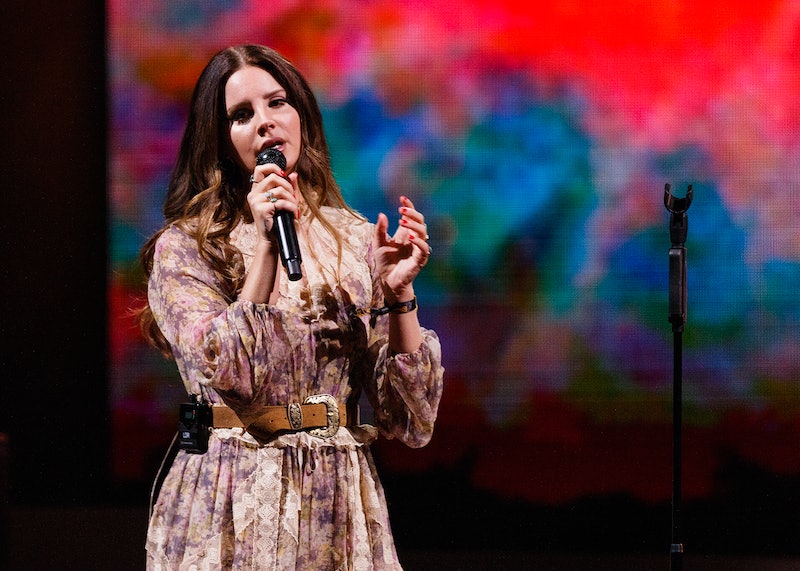 She's chaperoned countless people through their summer break ups, but it's her live shows that fans really go wild for. With that in mind, I want to know, will Lana Del Rey tour the UK in 2020?

Well, I'm afraid I've got some bad news, folks. Although Del Rey was due to start her huge European (which included four massive arena shows in London, Manchester, Glasgow, and Birmingham) tomorrow (Feb. 21), it was unfortunately announced today that the shows will be cancelled. A statement released by the star read:

The tour was to follow her album from 2019 Norman F*****g Rockwell which was a whole new chapter for the star and an enormous hit with fans and critics alike. In Oct. 2019, she spoke to Elton John about the effect this new chapter has had on her shows explaining in a conversation they had for Rolling Stone that not only has she developed musically — but the whole feel of her output seems different. "Being in rehearsals now," she said, "getting ready for these bigger shows, it's almost a little stressful, because what I’ve written is so much of a different mood from what I’ve been playing live for, like, 10 years." She added, "I'm like, 'I think I need to just do the whole show differently.'"

Despite all of this success as an artist and performer, speaking to NME, Del Rey said her happiest times are when she can appreciate the simpler things in life. "When I'm not working, or when I'm not playing shows, I'm really just on the phone, full eighth grade-style chatting with my friends and catching up," she says. Adding "I think just knowing that I'm on the same page with the people in my life who I'm the closest with gives me the most hope."

Hopefully she'll return to our shores for another tour after taking some well deserved downtime and, fingers crossed, making more music.

This article was originally published on Jan. 30, 2020