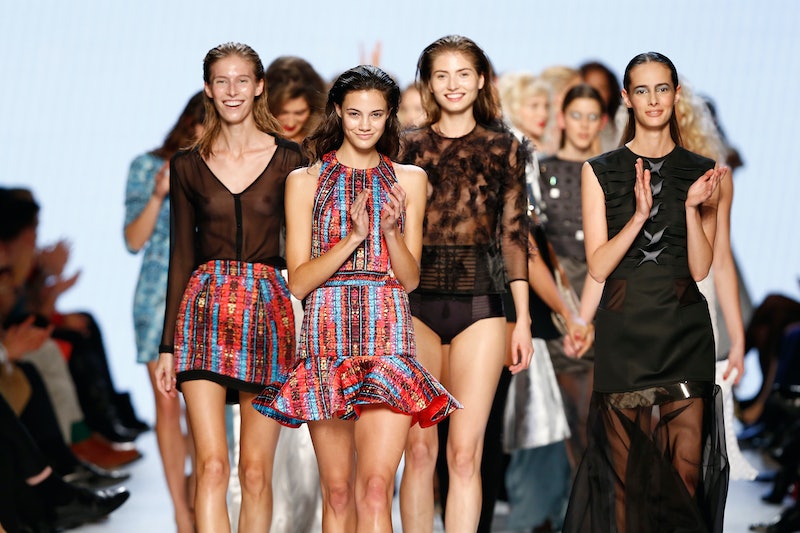 Designers are not happy about New York Fashion Week. According to the Wall Street Journal, they're upset that fashion shows have essentially become rock concerts, with crazed fans parading as bloggers and amateur photogs, all making the event an over-crowded nightmare. A few years ago, it wasn't like that, and the folks at IMG Fashion who run New York Fashion Week have plans for returning the event to a less-chaotic version of itself.

To accomplish this, IMG will instate stricter accreditation guidelines that will result in a 20 percent decrease in the number of media attendees (a.k.a. bloggers). These guidelines mean that all media outlets who request invitations to shows will be evaluated more carefully than usual to make sure they're actually influential. Only the super legitimate will be granted access, and ideally this will make the audience smaller and more professional. Organizers will also make the venues more affordable for designers, with smaller spaces that hold fewer people, and offer newer, cheaper options for brands who can't afford to shell out millions.

IMG hopes that these changes will make NYFW less of a spectacle and more of a business meeting. As senior vice president and managing director at IMG Fashion Events and Properties Catherine Bennett explained to WSJ:

“What used to be a platform for established designers to debut their collections to select media and buyers has developed into a cluttered, often cost-prohibitive and exhausting period for our industry to effectively do business.”

Many fashion insiders are ecstatic that NYFW will again be more industry focused, yet others (like myself) couldn't care less. Fashion week can be overwhelming for those involved, yes, but really (though the fashion gods may smite me for saying so), it's incredibly dull. Unless you're in the front row, perhaps, seated next to Anna Wintour or Kanye, all you do is briefly watch some clothes while loud music plays—clothes that you'll later inspect more closely online anyway.

So, since I don't care about maybe seeing the back of a celebrity's head, I'm all for the changes to Fashion Week. If nothing else, it will emphasize a truth that sometimes gets overlooked: as much as designers would like us to believe their dresses and shows are all about art and creativity, at the end of the day, it's all about money.