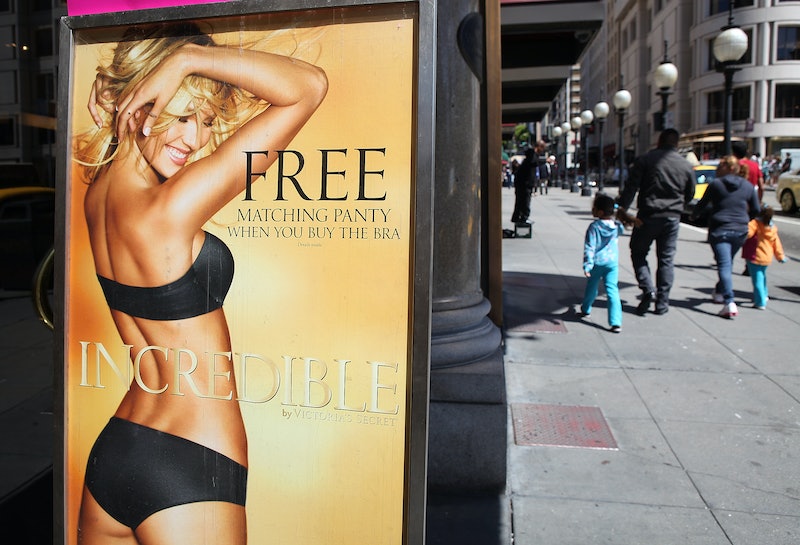 A former Victoria's Secret employee told Business Insider that the salespeople at her Chicagoland store are trained to treat male shoppers a lot differently than female ones. Apparently, men don't just come to the store to gawk at the larger-than-life photos of the Angels — they'd actually rather be anywhere else. Male shoppers tend to feel awkward among the Incredible Bras and the blingy Pink hoodies, and they'd rather not linger. Translation? They're much more likely to whip out the credit card in an effort to exit promptly.

The former worker, who chose to remain anonymous, told Business Insider, "The general feeling about men is that they would buy anything in order to get out of the store as quickly as possible. … Women are more value-oriented, and so we were encouraged to show them deals. Men would buy a couple of $50 bras without questioning us because they felt awkward."

She went on to say that sales associates considered a male customers a "lucky break" because of how easy it was to get them to spend money.

Ironically enough, Victoria's Secret used to be all about serving the male customer in his hour of awkwardness. The founder, Roy Raymond, felt embarrassed and uncomfortable while buying lingerie for his wife, and so after 8 years of studying the lingerie market, he launched Victoria's Secret. Unfortunately, selling lingerie to men wasn't as successful as Raymond had hoped, and he sold the company five years later, headed for bankruptcy.

Thirty-six years later, not much has changed. The specialty lingerie market for women has boomed, but go into any Victoria's Secret store and you'll see that most of the customers are women. Apparently men still feel just as uncomfortable as Raymond when it comes to buying their lady a glitzy bustier. And we're talking about a market where as many as 80 percent of women are estimated to be wearing the wrong bra size; no wonder men feel like they've got no chance of getting this right.

If the former sales associate is correct, men might do well to insist on seeing items at a variety of price points and to spend as long as it takes selecting the perfect gift instead of slapping down their credit card at the first sign of hot pink. Then if he still ends up buying you that $50 bra, you'll know it was because he wanted to, and not because he couldn't get out of there fast enough.