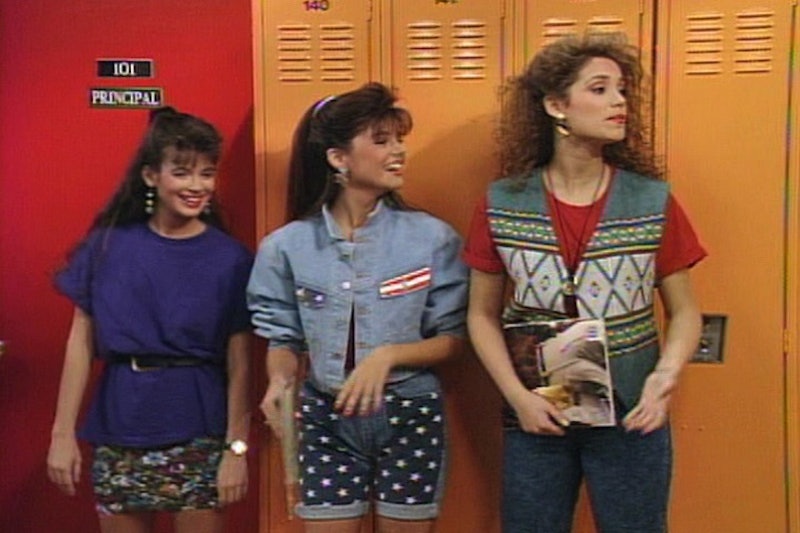 As someone who spent the better part of 1990 through 1999 navigating the halls of elementary and middle school, I am intimately familiar with '90s style as related to first day of school fashion. Who could forget the glory of back to school shopping at Limited Too and the weeks spent coordinating the perfect back-from-summer outfit, as if one wrong move would make or break the entire year?

Normally, it is the parents who want to dust off the shoe boxes full of old photos and wax on about how cute we were when we were younger — not that we can blame them because we were, obviously, the cutest. However, in a quest to truly understand the first-day-of-school fashions of decades past, I recently went into the archives to find every backpack wielding photo of myself in existence. While I was pretty certain I was likely to uncover mostly major dork moments, I quickly realized that back to school pre-Y2K meant overalls, denim skirts, Dr. Martens, and loads of other hella dope fashions that have made their way back into many modern wardrobes.

If you too spent an inordinate amount of time picking out your back-to-school-outfit while your mom yelled at you from the bottom of the stairs some nonsense about being late on the first day, your time has come to bask in the glory of your amazing sartorial choices. Allow me to wax on about the 13 things we likely wore on the first day of school in the ‘90s that are still mad fly, as told by some of our favorite 90's television stars and style icons.

Overalls are the original jumpsuits: One-piece denim that had many of us living that normcore life on the first day of school long before sartorialists made it cool. That's right: We — and Tia and Tamara, obviously — made it cool. Iconic middle school fashion at its finest. Two decades later, they're a little slimmer in silhouette, but just as sassy.

City Chic "Over It All" Distressed Denim Overalls Plus Size, $99.95, nordstrom.com

A denim mini was a '90s staple and also a trend my friends and I rocked hard for a solid five to seven years. Major bonus points if your denim ditty buttoned all the way down the front. This little baby, paired with the decade's best chunky shoes (hello, Dr. Martens!) was key to style success. Today it's the perfect throwback piece.

Ahhh the sweet innocence of pre-Y2K fashion. I like to think the Beverly Hills babes were responsible for the infatuation and total takeover of the babydoll dress, which was basically the '90s embodiment of what Britney Spears was singing about in "I'm Not A Girl, Not Yet A Woman."

Lisa Turtle was Bayside High's queen of the matching set and if you are a '90s kid, there is a 99.9 percent chance you were trend-setting with Ms. Turtle, rocking a co-ord before co-ords were a thing that people rocked. I distinctly remember a year when my back to school shopping haul consisted of only brightly colored matching sets of the knit variety, including the ever popular waffle knit. Luckily, we can now look back on those brightly coordinated days fondly, while wearing two-piece sets in updated fabrics and fresh silhouettes.

Culottes and wide leg shorts: Appropriately keeping us cool for back to school since 1990 and perfectly suited for yearbook photos as displayed by Bayside's style icon Kelly Kapowski. If you were super lucky, your culotte or wide fit shorts shorts even had pleats down the front and your mom had a matching pair. These days, the world can't get enough of these loose-fitting bottoms, probably because we like good air flow and fast fashion. Some things should never change.

The '90s saw a lot of plaid. If you were slightly older, cooler, and angsty, you may have been fueling the popularity of the iconic grunge look and, subsequently, the rise of the traditional red and black plaid flannel (likely tied around your waist). However, let us not forget that pre-2000, there was a glorious period during which plaid was crinkled and candy colored. With a plaid skirt like Cher Horowitz's in Clueless , no one could knock you off the top of the fashion food chain.

Dr. Martens: The pièce de résistance of '90s cool kid style. I begged my mom for months for a pair of Mary Janes, the sweet sister of the traditional lace-up Doc, in a cordovan color no less. When I finally got my very own pair, I basically thought I was the queen bee of Sandusky, Ohio. Everyone I know either owned a pair or dreamed of owning a pair and the sweet nostalgia is enough to make me want to work multiple styles back into my wardrobe. Bonus points for pairing them with plaid tights like the most famous sisters of the '90s.

The sneaker of choice for, well, almost everyone pre-2000, Keds were the Converse of the early '90s. Paired with culottes and some sassy socks, you were so channeling your inner head cheerleader Kelly Kapowski for your school year debut. These days, Taylor Swift takes over for our favorite Saved By The Bell sweetheart, but the sneaker is as stylish as ever.

If there was one thing everyone had in the '90s, it was fancy feet, or rather, ankles. I am not even sure socks without scrunches or ruffles were produced between 1990 and 2000. Embellished socks that scrunched down or rolled over with flair were the perfect match for any and all 90's shoes. Also, they helped most of us get one step closer to reaching our goal of being Kelly Taylor.

If you had feet, you probably had push socks or lace trimmed ankles. If you had hair, you had a scrunchie. No one rocked a high pony and a big ass hair scrunchie like Saved By The Bell's lovely lady trio. If you were alive in the '90s and had hair that remotely fit into a ponytail, you ponied up using a very thick, cotton-covered rubber band, and it was fashion. I don't know that scrunchies will ever return to their full glory, but let's all pour one out for the hair tie homie that defined our adolescence.

Tattoo chokers had a long, beloved life span as the staple jewelry piece of not only the late '90s, but also the early 2000s, evidenced by the fact that we rarely saw Melissa Joan Hart without one in Sabrina The Teenage Witch. The stretchy plastic went with everything, came in a variety of colors, and was relatively inexpensive. Today, they are chic throwbacks because, you know, what goes around comes around.

We may not be able to go back to school, but we can channel our inner '90s child and relive those first days vicariously through our epic fashion choices.

More like this
'Friends' Star Maggie Wheeler Offers Support To Matthew Perry After Reading His Memoir
By Alyssa Lapid
Twitter Is Having A Field Day Over Mr Blobby’s Costume Selling For £62k
By Catharina Cheung
Mel B Thinks These Celebs Should Play Them In A Spice Girls Movie
By Alyssa Lapid
Man Meets Politics: ‘Boy Meets World’ Star Ben Savage Is Running For Congress
By Jake Viswanath
Get Even More From Bustle — Sign Up For The Newsletter
From hair trends to relationship advice, our daily newsletter has everything you need to sound like a person who’s on TikTok, even if you aren’t.