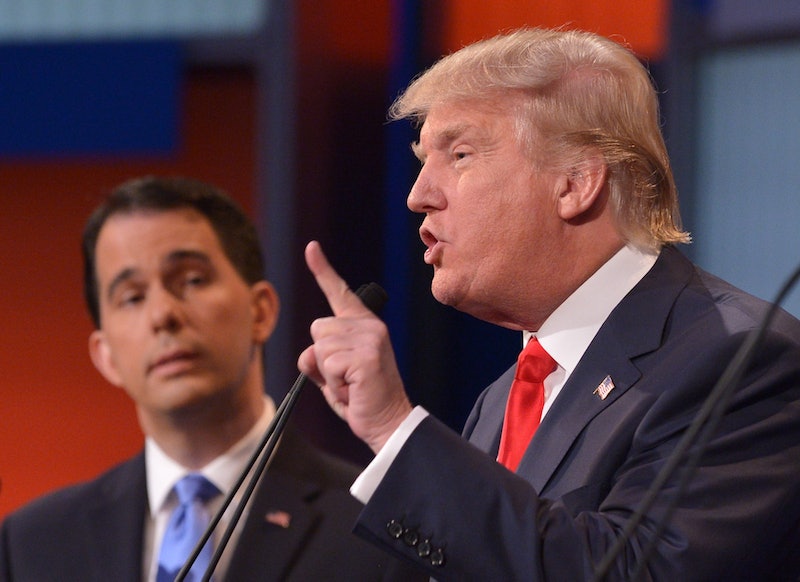 Considering Donald Trump was booed just minutes into the first Republican Presidential Debate Thursday night, insulted Rosie O'Donnell (and all women, for that matter), and shamelessly feuded with Fox News' moderators, we all expected Trump's closing statements at the GOP debate to be just as crazy as the mop on his head. Surprisingly, though, Trump appeared to go by the book for once, delivering closing statements that were as normal as, well, whatever Trump isn't.

Bookending the night with his closing statement — the Fox News commentators asked for statements by ascending rank in the polls — Trump chose to focus on trade and military. As he said:

Yeah. Not quite what one would have expected from the man who "doesn't respect political correctness" and who headlined an entire reality series based on the fact that he likes to give the last, ridiculous word. Still, after showcasing for the two-hour debate that Trump was — and will always be — all about himself (remember the non-denial about running as an Independent should he not snag the nomination?), the candidate at last turned the attention elsewhere.

Not that his stance in his closing statement is anything new. Even decades back, Trump commented and shared his concerns about trade, and got into far too much trouble during the campaign cycle already while talking about veterans. (Ahem, John McCain.) And though he's said he wants health care for all Americans, Trump has been vocal about his distaste for Obamacare. But, then again, what isn't he vocal about?

Trump's closing statements might have been the most mature display we have or will see from the candidate during his run. Now, if only he'd treat women as respectfully as he does a closing statement.

We felt you, Chris Wallace.