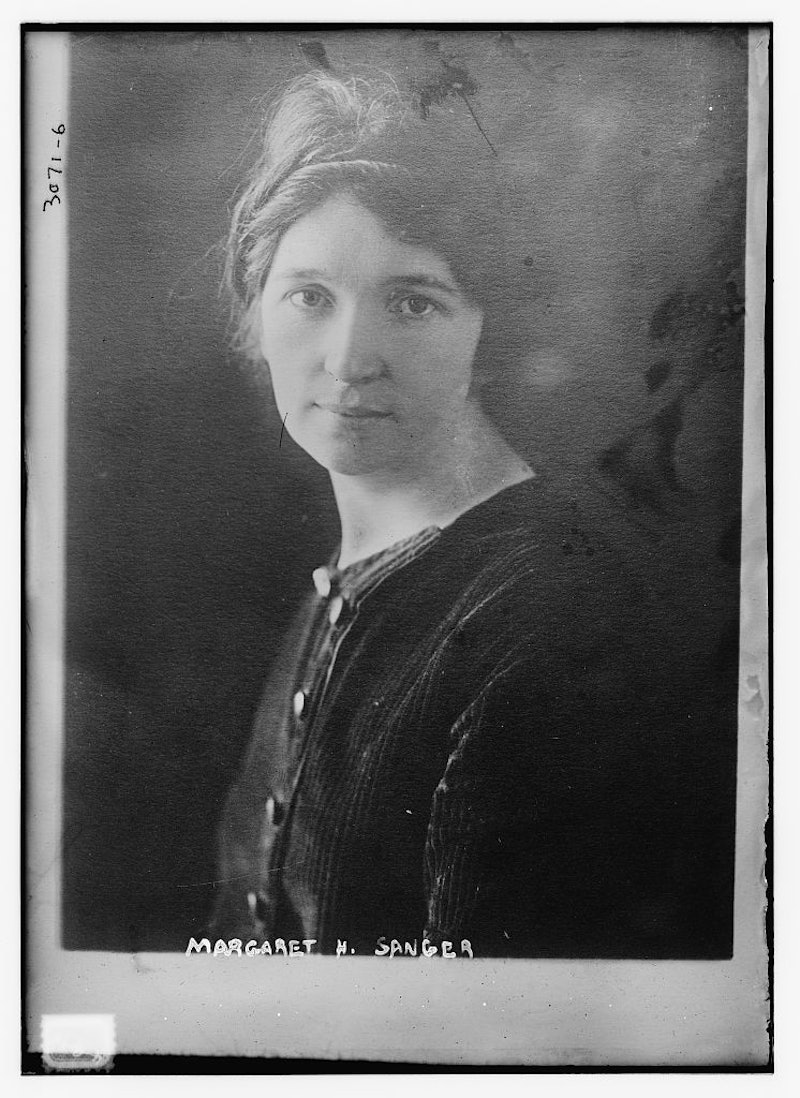 Margaret Sanger is a controversial figure and a divisive name in American politics. Frankly, why exactly the nurse and birth control advocate remains as contentious today as she was in her lifetime completely eludes me. The woman who popularized the term "birth control" and founded the organizations that would lead to Planned Parenthood is often, thanks to right-wing efforts to discredit her work, portrayed as a racist eugenics supporter. Sanger's own words, in essays and speeches promoting equality, and actions, tell an entirely different story. If you're a little confused about Sanger, here are the most essential facts about Margaret Sanger you don't know, but should.

For starters, know that the reality of Sanger's personal motives for promoting birth control, her views on abortion, her work with black communities, her stances on Nazi Germany, and her support for eugenics are all probably very different from what you've heard before. Sanger was a complex woman, and a genuinely passionate activist who had personally witnessed tragedy as a nurse, and through watching the suffering of her mother through 11 complicated pregnancies and tuberculosis.

She was aware of the plights of impoverished women and of women of color, and her activism was rooted in inclusiveness that all modern feminists could learn from. Sanger was an admirable woman. As you'll find, she may not have been perfect, but not for any of the false reasons provided by anti-Planned Parenthood propagandists.

1) Her Mother Was Pregnant 18 Times

Sanger's mother birthed eleven live children and endured 18 pregnancies and tuberculosis before her eventual death at the age of 50. Historians contend that Sanger herself was largely motivated to fight for birth control because she believed it was frequent pregnancy that ultimately caused her mother's death.

2) She Wanted To Prevent Abortions

According to Vicki Cox's book Margaret Sanger, in the low-income, predominantly-immigrant areas of New York in which Sanger worked as a nurse, "back-alley " abortions and dangerous self-terminations weren't uncommon, especially for parents who simply couldn't afford to raise more children. Sanger adamantly believed abortion procedures in her day were unsafe, and should therefore be avoided at all costs. She was only "pro-life" in the sense that she wanted to protect the lives of mothers by empowering them with the ability to plan their own pregnancies, and thus, protect them from needing to obtain an abortion.

3) She Wanted To Fight Poverty

As a nurse, Sanger consistently worked with immigrants who lived in poverty and obviously couldn't afford to feed and clothe more children, according to the National Women's History Museum. Many families in poverty in the early 20th century struggled to overcome it as they had to pay to feed and clothe children of unplanned pregnancies. Birth control allowed families without the financial stability to raise many children to limit their families' sizes and save money.

In her 1914 paper, "Into the Valley of Death — for What? " Sanger discusses poverty and family life in the United States:

[Society calls] upon the working women — insist that she produce a future society so that they and their miserable few will have slaves to feed them. They know that as long as the working class bear children, this fact alone will keep it in poverty and usually in ignorance as well.

4) She Worked With The NAACP's Founder

Ironically enough, given the popular right-wing myth that Sanger somehow had it out for African Americans, she worked closely with NAACP co-founder W.E.B. Du Bois toward the goal of ensuring that black communities had access to contraceptives. She believed black parents, just like white parents, should have the right to choose how many children they had.

5) Her Support For Eugenics Had Nothing To Do With Race

"Eugenics" was a social movement focused on improving the genetic features of the human population through selective breeding. It was largely rooted in growing notions of Anglo-Saxon white supremacy that gained momentum in the 1920s, as immigrants entered the United States at growing rates, and racial tensions escalated in the years leading up to the Holocaust.

However, Sanger's approach to eugenics had little to do with race. Sanger never wrote about using eugenics or birth control to regulate race. Instead, she wrote she believed birth control could be used to promote "the process of weeding out the unfit [and] of preventing the birth of defectives." She seemed a lot more concerned with lowering the odds of children being born with physical and mental disabilities than she did with exterminating blacks and promoting the Aryan race.

Eugenics strongly influenced the work of German Nazis to ensure the Aryan race, or the "master race," eclipsed all other ethnic groups. Sanger supported eugenics, but she had no known connections to Nazi Germany and vocally condemned Adolf Hitler's actions against Jews. In a 1939 unpublished paper unofficially titled "Hitler and War, " Sanger wrote:

I was one of the few Americans who joined the Anti-Nazi Committee and gave money, my name, and any influence I had with writers and others, to combat Hitler's rise to power in Germany. ... I firmly believe that Europe will not have a just Peace until Germany gets rid of Hitler.

7) She Was An Advocate For Women's Voting And Education Rights

Sanger's father was a vocal supporter of the women's suffrage movement, and Sanger herself went on to attend meetings of the New York City Women's Suffrage Party, and often made suggestions or even criticized the party to make it more inclusive of women in poverty. Simultaneously, Sanger was a champion for sex education in school, and to educate women in general about sexual health. Her writing was often banned and written off as "obscene, " but in modern America, so much of our understanding of sexual health was first brought to the public by Sanger's campaigning.

8) She Had Only Three Children

Sanger married twice, and spent the last 23 years of her life single. As a result of her two marriages, she bore only three children. Sanger kept busy with social activism, writing, researching, and campaigning. She demonstrated the incredible things women or really anyone could accomplish if they had reasonable amounts of children.