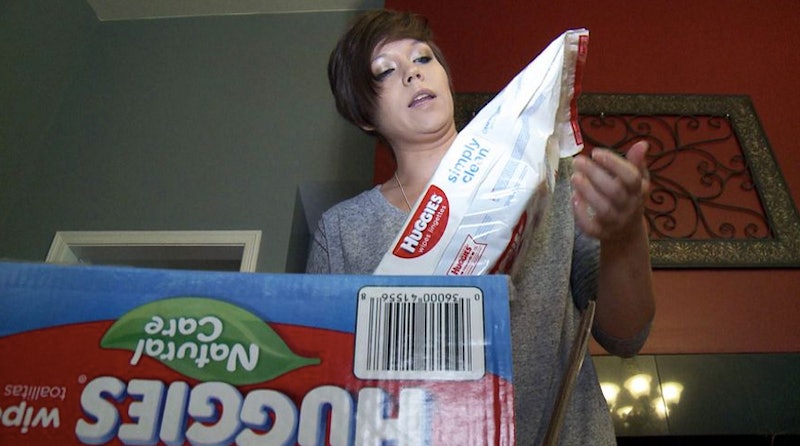 Your typical baby wipe may seem about as harmless as they come, but parents across social media are calling into question this week just what exactly one brand is putting in theirs. According to multiple reports, moms are asking Huggies to recall their baby wipes over concerns about small shiny particles allegedly found in one mom's recent purchase. And while not everyone is in agreement over what these so-called "tiny shards" really are, others are chiming claiming that they, too, have found abrasive, minuscule particles in their wipes. Huggies, which is owned by manufacturer Kimberly-Clark, has released an official statement on their website explaining that these "shiny particles" are really a "shimmer [that] can be caused by the microfibers reflecting light."

In a further statement emailed to Bustle Wednesday, the manufacturer stated that:

We are aware of the situation with a mom who posted videos of what she believed to be glass shards in a package of our wipes product. Those videos have prompted other calls and social media postings from consumers expressing concerns regarding the allegations of glass or fiberglass in our wipes. Since neither glass or fiberglass is used in the manufacturing of our wipes products, we believed at the time of the original complaint that what was reported as glass shards was, most likely, melted fibers from the material used in the manufacture the product.

As part of our ongoing effort to keep parents informed regarding concerns about our wipes, Huggies took the step of having the product retrieved from consumers tested by an outside, independent lab. We have now received the comprehensive analysis completed by the independent testing firm, McCrone Associates, Inc., of the wipes that were returned to us. We can confirm NO glass or fiberglass was present. We found only microfibers used to manufacture our baby wipes.

But Palm Coast, Florida mom Kimberly Miner isn't convinced that the particles are harmless. According to USA Today, the controversy over the wipes started last week when Miner opened a package of Huggies wipes and allegedly found what some have since described as little specks of an unidentifiable sharp substance. "I was really upset at first," Miner told the paper. "There was a really big hard piece on it. It honestly kind of looked like glue." But Miner's worries weren't just about how the alleged specks looked. She also had her husband, Steven, try out a wipe on his own arm. He claimed that it didn't take long to become super irritated. "I took a wipe, rubbed it on my arm and told her, 'see nothing happened.' Well, about 10 minutes later I really started noticing that it was starting to itch on my arm," he said.

Soon after, Miner hopped on to Facebook and posted a video of what she found. Her hope was to spread awareness to other parents, but even she was surprised by just how quickly it went viral. And by viral, I mean seriously viral — it's been viewed over 21 million times so far.

It wasn't long before hundreds of parents left comments thanking Miner for sharing the video, and a few even chimed in that they, too, have had similar experiences. "This is crazy," wrote Felicia Bailey Broderick. "But I think my son having this issue! He's complaining of his butt only when he use it [sic]."

Apparently, though, Miner's not the only parent to raise concerns about the "shiny particles." KTLA 5 reports that California mom Melissa Estrella shared her own baby wipes video on Facebook last week, too. Though Estrella's video has since been removed from the social network, it was later re-shared on Jukin Media. In it, Estrella can be heard claiming, "I'm not lying, you guys. There's glass on my daughter's wipes. I'm just so heartbroken I didn’t notice this sooner."

And according to WBIR, Knoxville, Tennessee, mom Kelsea Andrews also reached out to Huggies after one of her own batches of wipes appeared to be covered in glistening, abrasive particles. She claimed they were especially obvious in comparison to a second package she had, which didn't appear to have any of the alleged specks in them at all. "Their customer service folks have been fantastic and so helpful," Andrews claimed to WBIR.

Still, according to Kimberly-Clark's statement, a recall isn't happening — which Andrews said she finds a little confusing. "They're begging me to send in these wipes so that they can investigate and figure out what's in it," she claimed. "So at the same time they are saying that, how can the company come forward and say, 'Hey moms, it's still okay to use our product' when they're not even for sure what's in it in the first place?"

But while Andrews doesn't actually think there's glass in the wipes (she thinks it's type of polypropylene plastic, which is one of the ingredients), she does claim the company needs to do more to investigate. So does Miner. "I don't want any type of compensation," Miner told USA Today. "I don't even want the money back for the wipes. I don't want any coupons I'm not asking for free diapers I want them to recall the product. That's it."

While baby wipe recalls aren't that common, the last major one happened back in October 2014, when Nutek Disposables voluntarily recalled 10 different baby wipe brands. (Scroll down to read Nutek's full statement from 2014.) At the time, the concern was over traces of bacteria found in wipes by Cuties, Diapers.com, Femtex, Fred's, Kidgets, Member's Mark, Simply Right, Sunny Smiles, Tender Touch, and Well Beginnings, which were immediately pulled from shelves. The bacteria in question was B. cepacia, which can pose a risk to babies who have weakened immune systems, cystic fibrosis, or lung diseases. According to CNN, the company received several complaints of rashes, irritation, and fevers from the baby wipes, though the reports weren't more serious than that.

If you, or someone you know, are concerned about your own Huggies baby wipes, Kimberly-Clark encourages you to contact Huggies Consumer Care at 1-888-485-6839 or reach out via Huggies' official website.

Nutek Disposables, Inc. of McElhattan, PA has initiated a nationwide voluntary product recall at the retail level of all lots of baby wipes that it manufactured under the brand names Cuties, Diapers.com, Femtex, Fred's, Kidgets, Member's Mark, Simply Right, Sunny Smiles, Tender Touch, and Well Beginnings, because some packages may contain bacteria. These wipes were distributed by Nutek prior to October 21, 2014 to the following retail stores: Walgreens, Sam's Club, Family Dollar, Fred's, and Diapers.com.

After receiving a small number of complaints of odor and discoloration, Nutek conducted microbial testing that showed the presence of a bacteria, called Burkholderia cepacia (B. cepacia), in some of these products. Soon after, on October 3, 2014 the company initiated a voluntary withdrawal of lots that had tested positive for the bacteria, as well as other baby wipes in the surrounding time frame. After some additional lots were tested, as a precautionary measure, Nutek believed it was a prudent decision to withdraw all its baby wipe products.

B. cepacia poses little medical risk to healthy people. However, people who have certain health problems like weakened immune systems or chronic lung diseases, particularly cystic fibrosis, may be more susceptible to infections with B. cepacia. If you believe you have a weakened immune system or chronic lung disease and you have used one of the affected wipe products, you should call your doctor promptly for medical advice.

As of October 3, 2014, the date of the original withdrawal, the company had received only one report of irritation. Numerous reports of complaints have since been received by the company that include rash, irritation, infections, fever, gastro-intestinal issues, and respiratory issues, though these reports have not been confirmed to be related to the use of these products.

The company has not identified the cause of the problem, but is continuing to investigate. In the interim, Nutek has stopped shipping baby wipes manufactured at the facility.

Nutek takes the safety of consumers and the quality of its products very seriously and is taking all appropriate steps to address the issue and ensure this does not happen again.

The company is working with the U.S. Food & Drug Administration and the affected retailers and distributors throughout this process to address the issue.

More like this
This Is When Netflix Is Going To Start Charging You For Sharing Passwords
By Darshita Goyal
6 Organizations Fighting Police Brutality That You Can Support Right Now
By Syeda Khaula Saad and JR Thorpe
Eurovision Has Been Given A Whole New Look Ahead Of Its Liverpool Debut
By Bustle UK
11 Super Bowl Instagram Captions To Use On Game Day — Even If You Don’t Like Sports
By Alexis Morillo
Get Even More From Bustle — Sign Up For The Newsletter
From hair trends to relationship advice, our daily newsletter has everything you need to sound like a person who’s on TikTok, even if you aren’t.