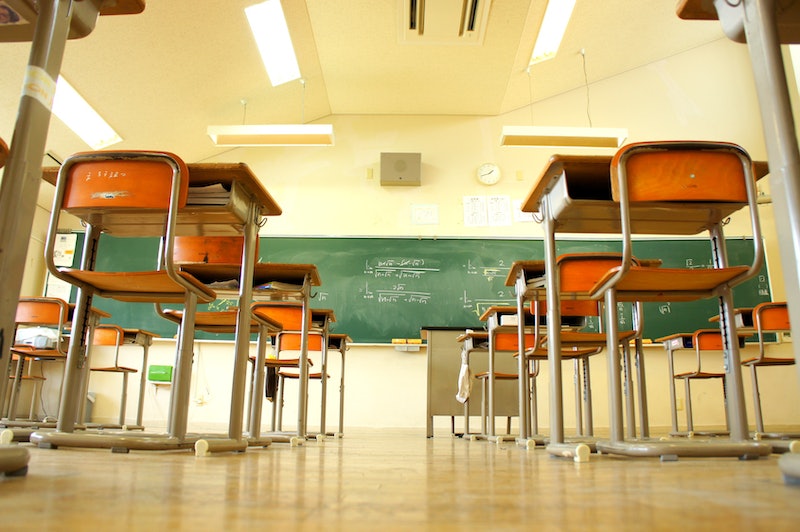 On Wednesday, a West Virginia high school found itself facing a terrifying scenario — though one that's becoming increasingly commonplace in schools across the United States. Shortly after 1 p.m. on Aug. 26, an unnamed 14-year-old student entered Phillip Barbour High School with a gun, walked straight into a classroom filled with 29 students, and pointed his pistol right at the teacher, WSLS reported. Though the school hasn't yet named the teacher, officials are praising her for the way she handled what could have been yet another deadly school shooting. The hours-long hostage standoff that resulted was frightening for all involved, to say the least, but the teacher reportedly kept things as calm as possible.

"The teacher did a miraculous job, calming the student, maintaining order in the class," said Barbour County Schools Superintendent Jeffrey Woofter in a prepared statement released by the West Virginia paper, The Exponent Telegram. "The school bell rang, and the teacher talked the student with the gun into not allowing any new students into the classroom. She met them at the door and told them not to come in."

Woofter also said Philippi Police Chief Jeff Walters did an "awesome job" at negotiated the release of all 29 students from the classroom and coerced the 14-year-old into surrendering — though the entire ordeal took an agonizing three hours. As for the rest of the 724-student body, they were safely ushered away from the school and onto the bleachers in the football stadium before they were eventually given rides home. In the end, the student was taken into custody, and no one was harmed — the best possible outcome for an otherwise terrible situation.

But if you're wondering why you didn't hear about the hostage situation at Phillip Barbour High School Tuesday, it's probably because we were all sitting in stunned shock over the deadly shooting that unfolded just hours before, and just one state away, in Moneta, Va. It was there that during a live, early-morning broadcast, WBDJ7 news team members Alison Park and Adam Ward were shot dead by their former coworker, Vester Lee Flanagan, also known by his on-air name, Bryce Williams. The details, if you haven't read them, are both heartbreaking and gut-wrenching — and serve as yet another reminder of just how badly the United States is need of gun law reform.

You need only take a quick look at the stats to realize that one: The United States has the most mass shootings of any country in the entire world, and it doesn't seem to be letting up any time soon. And when it comes to the rate of school shootings in particular, they've become so frequent that it's actually easy for the details of one story to blend right into the next. If you're starting to lose track of them all, that's because it's nearly impossible to keep up with — a Harvard research report found that the rate of school shootings has tripled since 2011.

However, everyday heroes like the quick-thinking teacher at Phillip Barbour High School can't be praised enough. And luckily, this isn't the first time someone has stepped in the way of danger and prevented further tragedy from unfolding at school. Here are the stories of three other brave individuals who risked their lives to prevent or interrupt school shootings:

One morning last January, Roswell, N.M., social studies teacher John Masterson came in to work and found himself face-to-face with a sawed-off shot gun. On the other end of it? A distraught 12-year-old student named Mason Campbell, who had already shot two fellow students — an 11-year-old boy and a 13-year-old girl — before Masterson stepped in to do what few might have the courage to do.

According to NBC News, the Berrendo Middle School teacher calmly talked the boy into putting his gun down. After he did so, the boy put his arms up, and Masterson was able to pin him against the wall to ensure he wouldn't flee. Luckily, off-duty police officer Lt. Gary Smith just happened to be at the school that morning to drop off his own child. Together, the pair were able to contain the boy until police arrived.

"He is an amazing man," said Gov. Susana Martinez, who later met with Masterson. "He stood there and allowed the gun to be pointed right at him so there would be no more young kids hurt."

You might remember the name Antoinette Tuff — her story is hard to forget. And her last name pretty much says it all. The school bookkeeper at Ronald E. McNair Discovery Learning Academy Decatur, Ga., made headlines last year after 20-year-old Michael Brandon Hill came into the school waving a gun. Instead of panicking, Tuff calmed down the young man — who she claims told her he was off his medication for a mental disorder — by sharing stories of her personal struggles. Tuff, reports CNN, had recently undergone a divorce and also cares for a son with multiple disabilities.

"It's going to be all right, sweetie," she can be heard telling Hill in the background of her 911 call. "I just want you to know I love you, though, OK? And I'm proud of you. That's a good thing that you're just giving up and don't worry about it. We all go through something in life. No, you don't want that. You going to be OK. I thought the same thing, you know, I tried to commit suicide last year after my husband left me. But look at me now. I'm still working and everything is OK."

Yep — this woman is amazing.

On April 27, the halls of North Thurston High School in Washington state were teeming with your typical Monday morning noises as students rushed off to make first period. That is, until a gunshot went off right before 7:30 a.m., sending students and teachers into a panic. Not Brady Olson, though — the teacher, who was standing near the teen who fired the round into the ceiling, remained calm and sprang into action. According to The Huffington Post, Olson immediately tackled the teen and kept the 16-year-old subdued until police arrived.

While Olson's efforts were undeniably brave, not to mention pretty selfless, it's clear he's the modest type. "As always, students come first, and today was no different," Olson wrote in a statement that was later posted to the North Thurston High School website. "I reacted in a way that any other teacher would react and at the sound of a gunshot had three other adults, including Tim Brown, Dean of Students, Principal Steve Rood, and Security Officer, Jim Beltico, going toward the sound of gun fire rather than away."

A serious hat tip to these heroic teachers and school workers — and many others out there — for putting aside their fears and saving many, many young lives as a result.

More like this
6 Organizations Fighting Police Brutality That You Can Support Right Now
By Syeda Khaula Saad and JR Thorpe
Here’s Where The NHS Nurses’ Strike Currently Stands
By Sophie McEvoy
15 Black-Owned Liquor & Wine Brands To Add To Your Bar Cart
By Alexis Morillo
8 Charities To Donate To During Black History Month
By Alexis Morillo
Get Even More From Bustle — Sign Up For The Newsletter
From hair trends to relationship advice, our daily newsletter has everything you need to sound like a person who’s on TikTok, even if you aren’t.