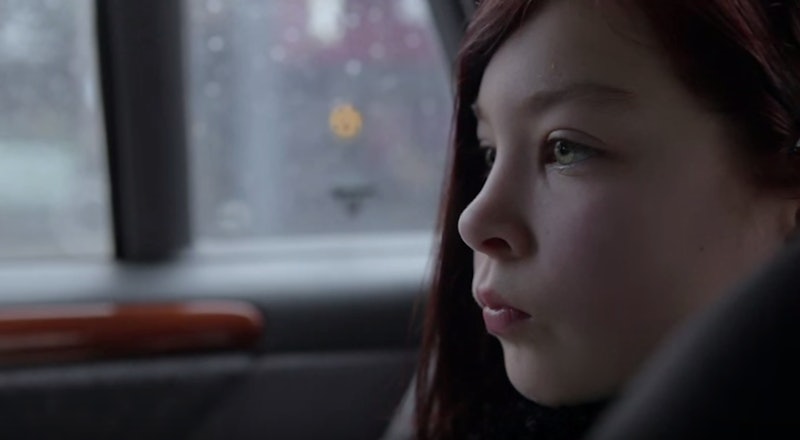 The 2015 Australian documentary Gayby Baby profiles four very different kids from four very different backgrounds who happen to have one thing in common: their parents are gay. And while growing up these days certainly comes with its own set of challenges, growing up with LGBT parents can unfortunately bring even more, thanks to others who are less accepting. So goes the film's main theme, which aims to ultimately send one simple, yet powerful message: "There's more than one way to make a family." Unfortunately, though, not everyone's a fan of the flick. Australian Minister Adrian Piccoli banned Gayby Baby from screening in some 50 schools across Sydney this month, according to The Independent. The film was supposed to be shown in schools across Australia for national "Wear It Purple Day."

In case you're unfamiliar, Wear It Purple Day is a day designated in Australia for promoting LGBT tolerance and inclusion. Hence why showing Gayby Baby in schools seemed like... oh, you know, kind of the perfect idea. Aside from having a PG rating, and therefore being totally acceptable to show to grade school students, the film has also scored some rock solid reviews. Anthony Marcusa for Scene Creek called it "exceptionally inspiring and genuinely heartwarming." The Guardian described it as a "compelling look at the children of same sex couples." But according to Piccoli, his reasoning for banning the film from classrooms had nothing to do with how good the film is or isn't. Instead, he told 2GB Radio: "During school hours we expect them to be doing maths and English and curriculum matters. This movie is not part of the curriculum and that’s why I’ve made that direction."

Um, OK, let's just be real for a second: How many times were you shown some less-than-educational movies in school that were totally off-curriculum? Yeah, all the time, particularly once late spring started to roll around. At least one person on Twitter knows what I'm talking about:

As you might imagine, there are lots of folks out there who are none too pleased by this decision — least of all the filmmaker herself, Maya Newell. "The film is so innocent," Newell told The Guardian. "It’s actually much more about four kids who are traversing oncoming puberty, who are dealing with the trials and tribulations of growing up. The fact they have gay parents is really minor."

Unsurprisingly, Twitter also had plenty to say about the controversial banning:

While there were some original reports swirling around out there that the ban stemmed from complaints from parents that it pushed a "gay agenda," those claims have since been refuted, according to The Guardian . Still, there continues to be bunch of ridiculous accusations being made about the film by some pretty uninformed people. Take Presbyterian minister Mark Powell, who told The Daily Telegraph earlier this week that the film is "trying to change children’s minds by promoting a gay lifestyle." But if by "changing children's minds" he means "teaching them to be tolerant" of everyone's differences... well then, isn't that great?

And then there's this (perhaps glaringly obvious) point to be made: Aren't we to assume that somewhere in these classrooms of kids watching Gayby Baby, there were at least a handful of students with LGBT parents themselves? The film's inclusive message is as much for kids with gay parents as for those whose are straight. And in some ways, may be even more powerful for kids with gay parents, if for no other reason than to make them feel less alone. As 12-year-old Ebony says in the film, "I don't know anyone who has a family like mine." Of course, in truth, that's not the case; but the fact that kids like Ebony have to grow up feeling isolated and even shunned because their families seem "different" from others is a sad reality that needs reversing.

Have a look at the Gayby Baby trailer below and see for yourself just how sweet — and yes, totally lacking in agenda — the film appears.

More like this
These Artists Are Reimagining Black History Month To Create A Better Future
By Katie Mitchell
25 Inspiring Quotes From Black Women To Celebrate Black History Month
By Kyli Rodriguez-Cayro and JR Thorpe
6 Organizations Fighting Police Brutality That You Can Support Right Now
By Syeda Khaula Saad and JR Thorpe
8 Charities To Donate To During Black History Month
By Alexis Morillo
Get Even More From Bustle — Sign Up For The Newsletter
From hair trends to relationship advice, our daily newsletter has everything you need to sound like a person who’s on TikTok, even if you aren’t.