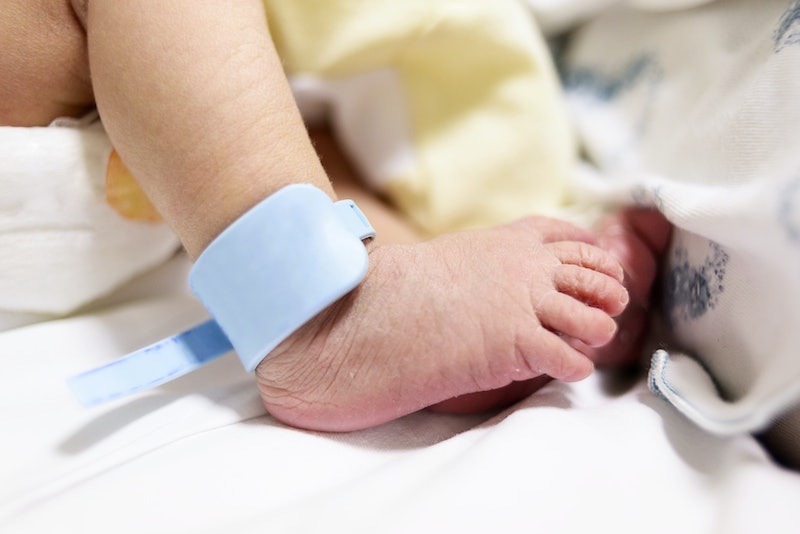 Thanks to the wonderful world of modern science and its constant advancements, medical breakthroughs are happening practically every week. I mean, we've got bionic arms, 3D organs, and can grow practically anything we want in a Petri dish. But here's one you may not have heard of before: a womb transplant. Yep — we can now do that too. In fact, according to the Associated Press, a Swedish woman recently gave birth after a womb transplant from her mother, and that baby is now a bouncing and totally healthy 9-month-old.

Though the pair wish to remain anonymous, they did share their story earlier this month with the AP, and I've gotta say, it's pretty amazing. According to AP, the daughter at the center of the story, currently in her early 30s, was only in her 20s when she lost her uterus to cancer. Though she says never truly imagined being able to carry a baby on her own after that, thanks to her mother's extreme generosity and the medical prowess of Dr. Mats Brannstrom, who performed the procedure with his team, she is now the very proud mom of one. "It can't be described how happy we are," she told The Associated Press in an exclusive interview. "It's everything that I hoped for and a little bit more."

Brannstrom, who is currently a professor of obstetrics and gynecology at Sahlgrenska Hospital at the University of Gothenburg and Stockholm IVF, first pioneered the surgery over two years ago. But even he was especially touched by this story in particular. "It's one uterus bridging three generations of a family," Brannstrom told the AP, noting how remarkable the circumstances are.

It's true; the very concept of one woman being able to give another her womb — and that womb being able to carry and bring into this world a healthy baby — is insanely cool/amazing/beautiful, and a million other adjectives I could list off. But when you consider that in this case, the woman was given the womb that also carried her, some 30 plus years ago... well, that brings on even more feels.

According to the AP, doctors waited one year after the transplant surgery was a success to implant the embryos, which were fertilized using the woman's eggs and her husband's sperm. While the birth itself made headlines last year, it originally wasn't made public that the woman's mother was her donor. In fact, The Guardian reported last October that the womb was donated by "a 61-year-old family friend who had gone through menopause after giving birth to two children." Brannstrom also told the paper at the time he was pleasantly surprised that a transplant with a much older uterus proved so successful, but noted that the most important part was that the womb was healthy. There was also the risk that the daughter's body would reject the new womb; though doctors had the daughter take three different medications to prevent that. By all accounts, it went off without a hitch — according to the The Guardian, the daughter began getting her period again after just six weeks, which was a major sign to doctors that the womb was healthy, and could one day carry a baby.

The procedure itself was suggested to Brannstrom by a patient back in 1998, NPR reports. As he recalled last August, Brannstrom had just removed her uterus to prevent cervical cancer from spreading, and was explaining to her just how she could still have ovaries, eggs, and hormones, but not be able to carry a baby. That was when she raised the question: If a healthy womb could be transplanted, could it carry a baby to term? Today, some 17 years later, that one question has led to one groundbreaking procedure — one that some are describing as the biggest breakthrough in fertility medicine since IVF, which may mean that one day, the term "womb transplant" might actually not raise an eyebrow. But for now, Brannstrom and his team are working to perfect it, and explore even more options — an upcoming trial plans to use wombs from women who have recently died, while another will use robotic surgery to hopefully cut down on surgery time (which now takes a grueling 10- to 12-hours).

As for the little baby this amazing procedure helped create, his mother can only imagine what he'll one day think when he hears the story. "My thought is that he will always know how wanted he was," she said. "Hopefully when he grows up, uterus transplantation [will be] an acknowledged treatment for women like me and he will know that he was part of making that possible."

If this story's left you inspired, I've got plenty more where that came from. Here are three other powerful stories of women who stepped in for their sisters, their daughters, and even their best friends to give them the best gift you could ever possibly give someone: the baby they've always wanted.

1. This Awesome Sister Who Carried Her Identical Twin's Baby

That powerful sister bond, man. It knows no bounds. Just ask Allison Ardolino Dinkelacker and Dawn Ardolino Policastro. The duo went super viral just last month when their joint maternity photo made the rounds, showing a very pregnant Dawn carrying Allison's baby. That's because after cancer treatment left Allison unable to conceive for a second time, her identical twin sister offered to carry the baby for her, without even hesitating.

On Aug. 5, Dawn gave birth to a healthy baby boy named Hudson — but not before documenting the last few months of her pregnancy in a super sweet photo series by Allison Rose Photography (which you should definitely check out).

It's safe to say that while these sisters were clearly super tight before, the last nine months brought them closer than ever. Allison made that fact known to the world in a recent Facebook post, which she wrote as an open letter to her sister. "How can we begin to thank you for the tremendous generosity and sacrifice you have so willingly bestowed these last few months?" it begins. "You have given us not just the fulfillment of a wish we've had for the last six years, but a whole new life, and a family of four we thought we’d never have."

2. The Grandma Who Carried Her Own Grandchild, After Learning Her Daughter Had Cervical Cancer

When 29-year-old Emily Jordan found out she had cervical cancer back in 2010, that news alone was painful enough. But when doctors told her she was pregnant, and that she'd have to choose between keeping her child and having a life-saving hysterectomy surgery, she was devastated. After careful thought with her husband, Mike, the Jordans decided to move forward with the surgery; but Emily still clung to hopes of one day having a child of her own.

Finally, two years later, that day would finally come, thanks to the marvels of modern science. The Chicago couple had decided to freeze their embryos, and found a surrogate to carry their baby — though she wasn't exactly the one they'd originally pictured. It was Emily's 53-year-old mother, Cindy Reutzel, who shared with the Associated Press that she wanted so bad for her daughter to have the experience with a child that she had.

"The thought of Emily and Mike not being able to have children and share that piece of their lives with someone just broke my heart," said Reutzel. "I want Emily to have that connection with another human being like I had with her."

3. The Woman Who Carried Her Best Friend's Baby While She Underwent Chemo

And now for a story that will really bring tears to your eyes... After 30-year-old Laura Yoho suddenly passed out at the gym one day back in 2010, doctors first thought she might have had a stroke. But sadly, they soon discovered the truth was much worse: she had brain cancer, and the tumors were quickly spreading.

But before starting treatment, the Iowa native and her husband Nate made one fateful decision: they had Laura's eggs frozen. And a few years later, while they were looking for a surrogate, Laura's best friend Kara Stetson stepped up (thereby becoming the best best friend ever). But although Kara successfully carried little baby Caralyn to term, the girl's mother would sadly never meet her: Laura died just four months before Kara gave birth.

Shortly afterwards, Nate penned an open letter to his daughter in The Des Moines Register, in the hopes that one day, she'd be able to read it and learn all about her mother, and the story of how she came to be: "You're barely a month old now, too young to read this letter," it begins. "But one day soon, someone will show you this, and maybe it will help you understand the wonderful confluence of love and hope that brought you into this world." (You can read the letter in its entirety — which is seriously, seriously moving — right here.)

Now if you'll excuse me, I have to go finish bawling my eyes out, and possibly call my best friend...

More like this
How Ovulation Affects Your Sense Of Smell, Libido, & More
By JR Thorpe and Lexi Inks
An Expert Weighs In On The Viral Raw Carrot Salad Trend
By Alexis Morillo
25 Inspiring Quotes From Black Women To Celebrate Black History Month
By Kyli Rodriguez-Cayro and JR Thorpe
Here’s Where The NHS Nurses’ Strike Currently Stands
By Sophie McEvoy
Get Even More From Bustle — Sign Up For The Newsletter
From hair trends to relationship advice, our daily newsletter has everything you need to sound like a person who’s on TikTok, even if you aren’t.