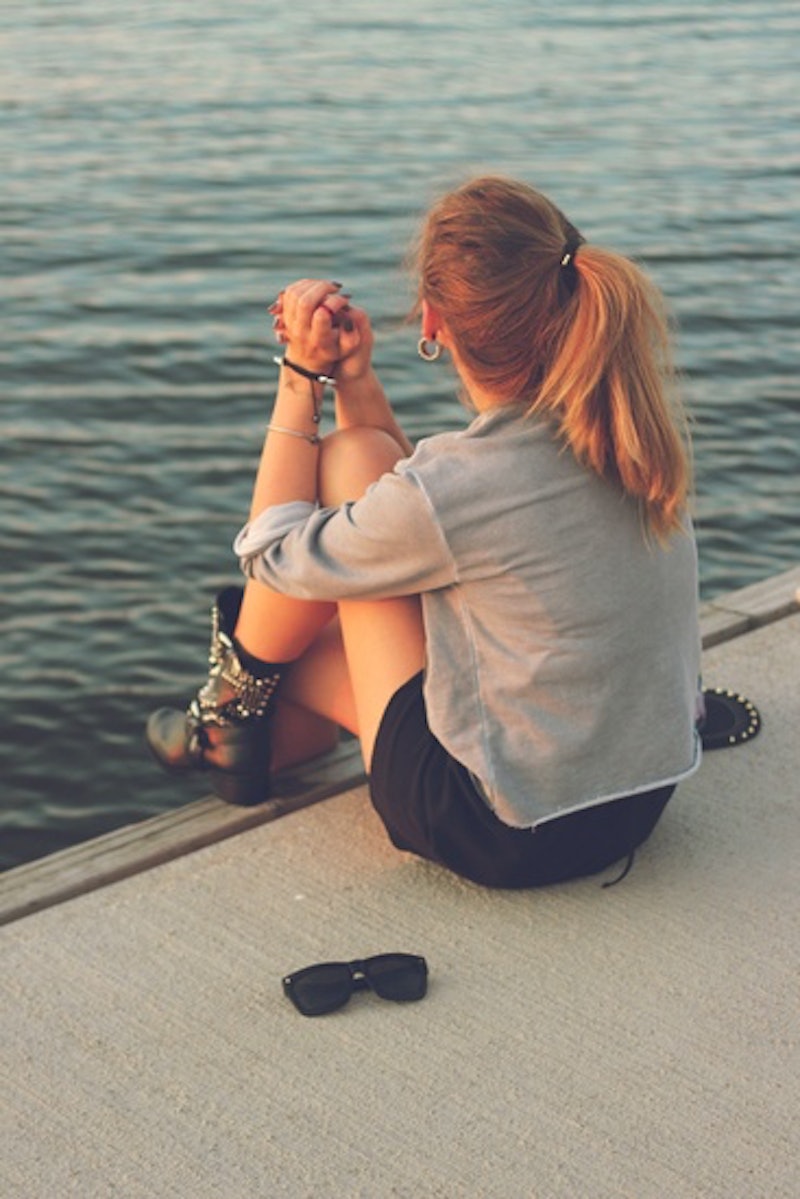 Ghosting, just typing that word makes my stomach turn. I wish it meant spirits and talking to dead people — that would be a lot less confusing, annoying, and hurtful. According to the Urban Dictionary, "Ghosting is the act of suddenly stopping all communication with someone that the subject is dating but no longer wishes to date. This is done in hopes that the ghostee will just get the hint and leave the subject alone, as opposed to the ghoster simply telling them that he/she is no longer interested." While this may be the definition, I think it's a complete and total load of crap. Ghosting is what flaky, shady cowards do.

I have been ghosted on before and it wasn't fun. I would call it aggravating in the extreme. Without any clue that something wasn't right, I found myself suddenly in the middle of a slowly rising sense of panic, and uncertainty.

We've all been there.

Why did he or she stop texting, calling, emailing...existing? What did you do to cause this situation? There are so many questions and never any answers. You're supposed to just suck it up, and let it go.

But it's the why that continues to haunt you.

Ghosting has been around forever. I bet in Jane Austen's day, when your crush didn't come calling, you simply told yourself that they were in London taking care of business, until you heard months later, by your gossiping friend, Lady Delany, that they had married the youngest daughter of the Earl of Grey, and you would have wondered, why on earth couldn't they have just told you the truth when you took a walk in the park that day?

There is something so disrespectful and mean about ghosting — as if you are the problem.The ghostee is never the problem, it's the ghoster that has a problem, and it's especially bad these days, since there are so many ways to communicate when you're not interested.

People will always ghost, and we'll always have to deal with it the best way we can. Here are the five stages you'll go through to get over your ghosting grief.

1. You Are Initially In Denial, And Then Start Feeling Weirdly Alone

When you're being ghosted it takes a while for it to sink in, because of course, you're not being notified in any way, shape, or form, that your relationship or whatever it was, is no longer. You will go through a ton of reasons why your potential-significant other isn't texting or calling you. They took their phone to the beach and it was washed out to shore, or they mentioned that their battery sucks, that must be it — their phone has been charging and that's why they weren't able to call you for three days/weeks.You'll give it some more time, you don't want to scare him/her off. You debate telling your friends about this potential ghosting as they may not be that sympathetic, it's not like you were engaged or anything. You hooked up a few times, you thought it was more, but they showed all the signs of being a ghoster, you just aren't psychic in any way.

2. You Find Yourself Right In The Middle Of A Freak Show Of Emotions

You're going to need to feel all the feels, but especially the feeling of being pissed off. You were starting to invest in this jerk and they can't even text you, or send you some kind of message? You're just supposed to know that it's done? You're tempted to send that email in your drafts folder, or another text or leave him or her a nasty message. It's not as if you can scare them off, they're already gone. Oops here comes the disappointment, followed by the hurt, but somehow all your emotions are tinged with a more than a hint of frustration. Ugh, what an a-hole!

3. You Try To Come Up With Ways To Change The Situation

There must be something you can do to stop feeling this way. If only you knew what you did wrong (nothing,) or why he/she lost interest ( they don't even know,) or what you can do to get them to respond to you (they aren't worth it, don't waste any more of your energy). There's no magic pill you can take, or promises to a higher being. Ghosting is what it is, and that's a piss poor way of dealing with another human.

4. You Come Back Around To Being Distraught

Hello my old friend sadness, you're back? I thought I had gotten past you, but once again I find myself crying when I walk past that sushi place we had our first date. I really thought everything was going so well. Ghosting sneaks up on you like a bad case of the stomach flu, and can feel just as devestating, even if you didn't even hang out that much.

5. Finally, You Get That You Were Ghosted And Can Move On

OK, that thing happened with the ghosting, but you know what? You're fine. No, you're better than fine, you're a badass. You're glad they ghosted you, because they were so not worth you, and it's better that they're out of your life now. Sure, it would have been awesome if they'd had some balls (and that includes lady-ghosters, too) and were straight with you, but whatever, they can go mess with someone else's head.

Want more of Bustle's Sex and Relationships coverage? Check out our new podcast, I Want It That Way, which delves into the difficult and downright dirty parts of a relationship, and find more on our Soundcloud page.

More like this
Here’s What TikTok's "Mascara” Trend Is *Really* About
By El Hunt
The 3 Zodiac Signs Most Likely To Get Married Later In Life
By Kristine Fellizar
4 Zodiac Signs That Will Take Forever To Admit They Like You
By Kristine Fellizar
18 Hinge Prompt Answers To Try If You’re Looking For Something Casual
By Lexi Inks
Get Even More From Bustle — Sign Up For The Newsletter
From hair trends to relationship advice, our daily newsletter has everything you need to sound like a person who’s on TikTok, even if you aren’t.