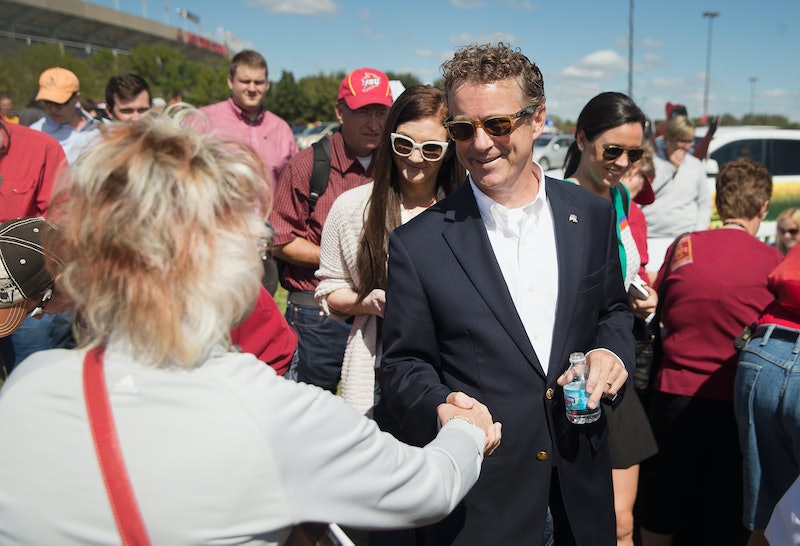 If the 2016 presidential race has taught us anything so far, it's this: All bets are off. After all, who would've thought that a businessman and TV personality with no prior political experience would be leading the polls? And yet, here we are: Living in a world in which Donald Trump could be president — with former neurosurgeon Ben Carson hot on his heels. But if this is a race for political outsiders, then maybe, just maybe Sen. Rand Paul has a shot in the game, too. After Wednesday night's CNN debate, the Rand Paul debate memes just kept on flowing — proving that at the very least, the unlikely candidate has our attention, if not our vote. (Oh yeah, and he didn't fair too badly when it came to the actual debate, either.)

That's not such a huge surprise, though. I mean, the Aug. 6 debate wasn't that long ago — who can forget how universally fascinated we were by Paul's hair, which caused basically everyone to completely ignore what he was actually talking about and focus instead on his very Ramen-Noodle-esque curly top. (For the record, he got pretty fired up with New Jersey Gov. Chris Christie over NSA practices, and shared some strong views on terrorism that suggested a bit of flip-flopping.) That's a pretty big deal, considering Paul's hair appeared on the same stage as Donald Trump's.

You weren't the only one zoning out, though. That curious mane got pretty much everyone talking:

Meanwhile, others got ... well, just a tad carried away with things.

But Wednesday night's memes really took things to the next level.

Thank you, Twitter ... No, thank you Internet. Keep on being you.

More like this
Twitter Is Having A Meltdown Over Buying Beyoncé Renaissance Tour Tickets
By Jake Viswanath
Matt Hancock’s TikTok Is The Most Matt Hancock Thing Ever
By Sam Ramsden
The Internet Can’t Get Enough Of Viktor & Rolf's Upside Down Dresses
By El Hunt
12 Anti-Valentine’s Day Memes For People Who Are So Over Romance
By Meghan Bassett
Get Even More From Bustle — Sign Up For The Newsletter
From hair trends to relationship advice, our daily newsletter has everything you need to sound like a person who’s on TikTok, even if you aren’t.