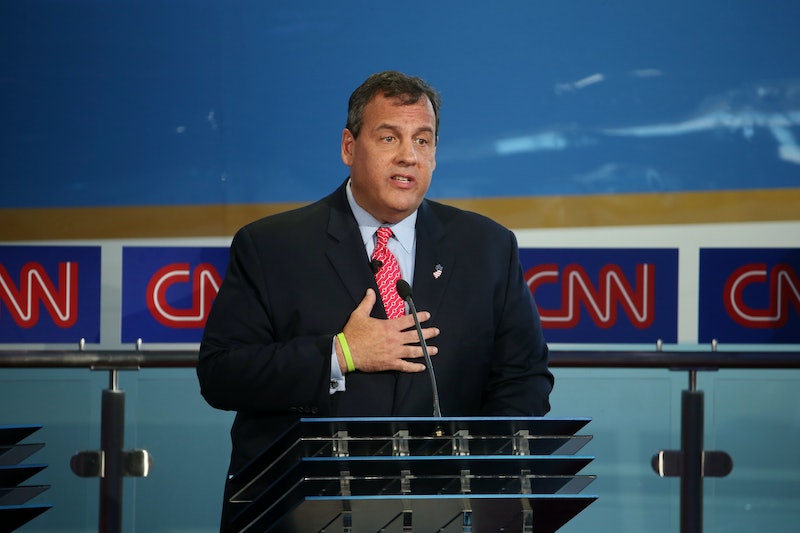 Update: Chris Christie is again wearing the bracelet during the third Republican debate on Wednesday, Oct. 28. Earlier: Wednesday night's GOP debate is sending the Internet ablaze for a number of reasons. (Can we talk about that plane, please?) But one candidate's fashion choice is rising to the top as one of the most discussed topics — and surprisingly it's not Donald Trump's hair. It is, in fact, New Jersey Gov. Chris Christie's lime green bracelet that is provoking a lot of questions from the Twittersphere. Namely: What is it? What does it stand for? And why is he wearing it?

People have taken to Twitter to guess what the bracelet might stand for, as a candidate's particular fashion choices during debates have historically been regarded as significant. Because the Internet is a wonderful place, the question has actually already been answered. According to The Washington Post, Christie's green bracelet is in support of a fellow Republican governor, Maryland's Larry Hogan, who recently was diagnosed with the advanced form of cancer known as non-Hodgkin's lymphoma. Christie's support of his friend is apparently important enough for him to include in his debate ensemble, which, whether you like him or not, you have to admit is kind of cool.

While that answer isn't particularly funny or surprising, I have to give the Internet an A for effort for their hilarious and bizarre guesses. Here are some of the best — and snarkiest — guesses.

More like this
Gillian Anderson's New Netflix Drama Is *Nothing* Like 'Sex Education'
By Frances Stewart
Matt Hancock’s TikTok Is The Most Matt Hancock Thing Ever
By Sam Ramsden
You’ve Got 'Love Island’s Farmer Will All Wrong
By Jack Orenstein
Twitter Is Shook As Tom Brady Holds Back Tears Announcing His 2nd Retirement
By Marina Watts
Get Even More From Bustle — Sign Up For The Newsletter
From hair trends to relationship advice, our daily newsletter has everything you need to sound like a person who’s on TikTok, even if you aren’t.