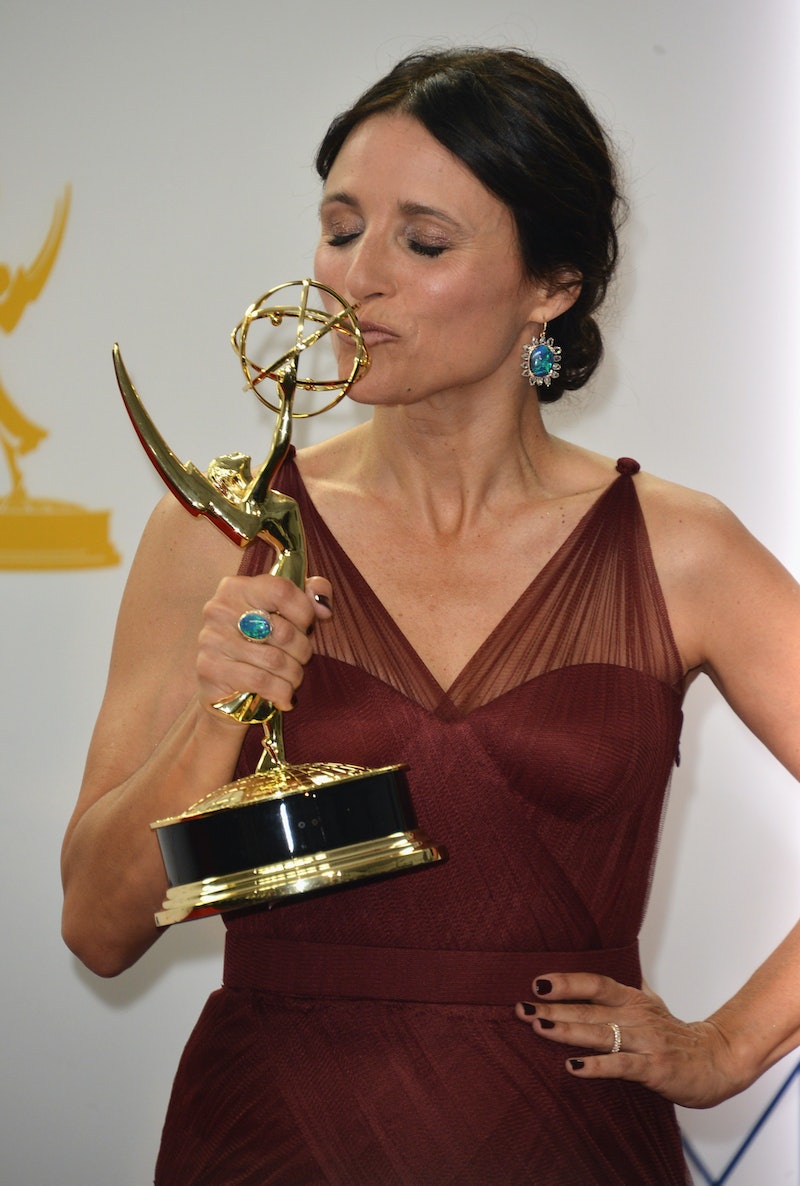 After five seasons on the air, we're now all hesitantly in love with and simultaneously horrified by Julia Louis-Dreyfus' all too real Selina Meyer. It was only a few years ago in 2012, however, that the cast of Veep at the Emmys was welcomed for the first time on the red carpet.

Each individual definitely made their mark both on and off of the red carpet. The then-Emmys rookie was nominated for Outstanding Comedy Series and Louis-Dreyfus was recognized for bringing the cutthroat and clueless Vice President Meyer to life, taking home the Outstanding Lead Actress in a Comedy Series award. This set the tone for how beloved and lauded Veep would be. In the three years since, the show has simply been gathering more and more acclaim and nominations.

While its costuming is not necessarily going to be filling up your Pinterest boards anytime soon — and it's never going to be haled as "fashionably iconic" — Veep's stars have always walked the red carpet in style. The cast totally killed it in 2012, taking a break from the D.C. wardrobe of power suits to sport some pretty elegant and dapper formal wear.

Let's hope that in 2015, the hilarious show brings home more than the single trophy it garnered in 2012, but that the cast looks just as good as always.

Anna Chlumsky's 2012 Emmys gown was delicate and totally glam all at once. Who says gray has to be boring?

Reid Scott was dashing and dapper in a bowtie and monochrome at the 2012 Emmy Awards.

More like this
Phoebe Dynevor Serves ‘Bridgerton’ Underboob In Stunning Floral Gown
By El Hunt
15 Of Carrie Bradshaw’s Best Handbags From Sex & The City
By Dominique Norman
'Emily In Paris' Lucien Laviscount & Lucas Bravo Owned Paris Fashion Week
By El Hunt
10 Flashiest Looks From The 2023 Critics' Choice Awards
By Allie Fasanella
Get Even More From Bustle — Sign Up For The Newsletter
From hair trends to relationship advice, our daily newsletter has everything you need to sound like a person who’s on TikTok, even if you aren’t.