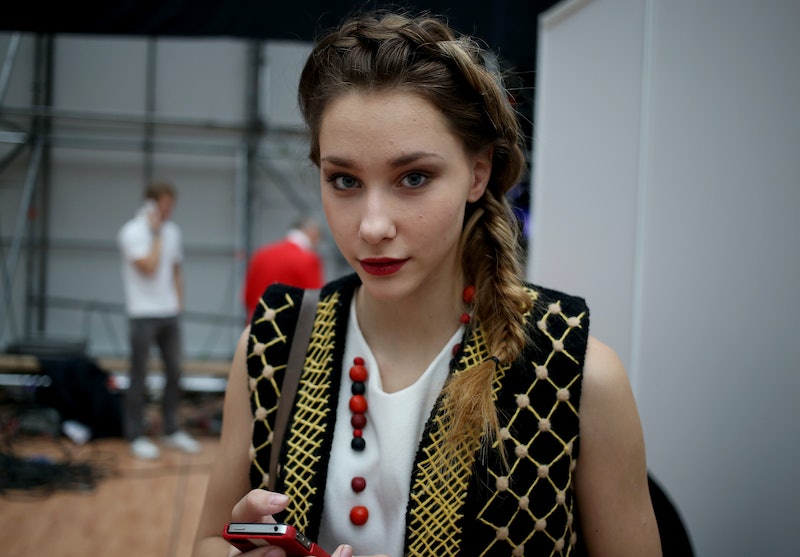 Birth certificate check, anyone? Fashionista reports that Vogue bypassed its own regulations (again) by hiring an underage model for a Vogue Mexico shoot. And you could have fooled us: Polish model Julia Borawska certainly looks older than 15 in the magazine's November photo spread, thanks to heavy makeup and the abundance of couture clothing.

Employing young models is hardly a new practice for the fashion industry, but hiring a model of Borawska's age is a direct violation of Vogue's Health Initiative. The Council of Fashion Designers of America introduced its Health Initiative in 2007 with Vogue as a partner, citing the general wellbeing of those involved in the fashion industry as the motivating factor behind the idea. In June of 2012, Anna Wintour informed Vogue readers via editor's letter that each of Vogue 's international editions had agreed to join the initiative. With the help of the CFDA, Vogue has since sought to lower the incidence of eating disorders and increase commitment to healthy habits, in addition to propagating less idealized paradigms of the female form in favor of fit, strong bodies.

One of Vogue's most significant contributions to the initiative, however, was setting a minimum employment age of 16 for Vogue models, an agreement which the magazine has now breached three times. In response to its latest transgression, Vogue Mexico's editor-in-chief Kelly Talamas claimed that she was "not involved" in the casting process, and the spread's photographer Kevin Sinclair claimed ignorance of the model's age. It seems the magazine will happily acknowledge its improvements to the health of its employees and readers, but turns a blind eye when the Health Initiative proves inconvenient artistically.

Despite supposed dedication to the wellness and respect of models in the fashion industry, Vogue seems to often forget the finer points of its Health Initiative to the detriment of its models and its readers. Hopefully, the magazine will someday be able to practice what it preaches.