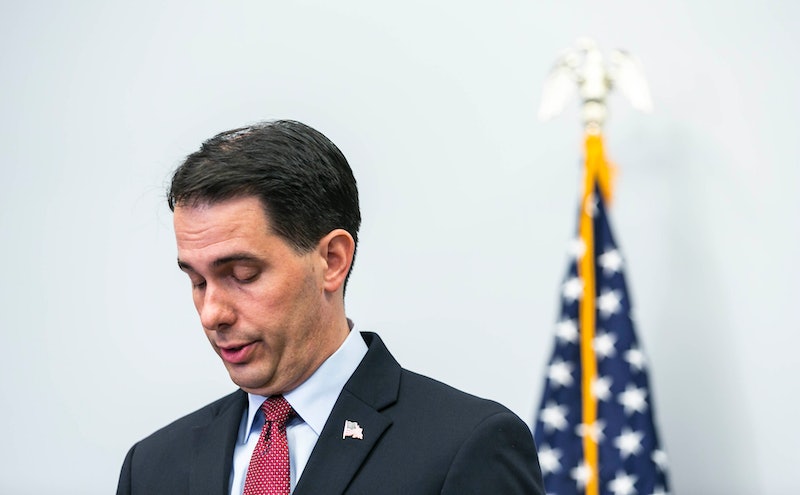 Republican presidential candidate Scott Walker called a press conference on Monday afternoon, where he announced plans to suspend his campaign for the White House. The announcement comes as no surprise, given the very crowded GOP field and Walker's poor performance in the primary debates and recent national polls. Still, even for liberal voters, there are several good reasons to miss Scott Walker's presidential campaign. Believe it or not, Walker's exit puts an end to hearing the candidate's legitimate perspective on several key issues facing voters in the 2016 elections.

At the start of his campaign, Walker introduced himself to voters as an everyman, a regular guy who'd understand voters in a way the other candidates simply couldn't. Walker's blue collar appeal and his anti-labor stance as governor made him a favorite among Tea Party conservatives and pushed him to an early lead among the GOP contenders. Then Donald Trump entered the race, and Walker's quiet, Midwestern persona withered as Trump's star rose. Walker, who had enjoyed a decent lead in the Iowa polls, soon dropped to the bottom of the list of favored candidates, and the campaign never quite recovered. As more voter and media attention followed Trump's say-anything campaign antics, the Walker campaign seemed to struggle to find a unique position.

But there were actually several areas where Walker could have offered a unique perspective, had he managed to break through the noise from his fellow candidates. Here are three issues where Walker's perspective might have made for an interesting discussion among the GOP contenders.

Voters grappling with "kitchen table" economic issues might have been interested in hearing from Walker, as the only contender to juggling actual, deep personal debt. According to Walker's most recent statement of economic interests, the Wisconsin governor carries somewhere between $10,000 and $100,000 in credit card debt; and The Boston Globe placed his net personal assets at -$72,500.

On Non-Traditional Paths To Success

Walker would have also offered an interesting perspective given that he left Marquette College in 1990 as a senior without graduating. Walker went to work at the American Red Cross, then ran for Wisconsin's state assembly, a path that he would likely have touted as further proof of his "everyman" status. Still, had he been elected, Walker would have been the first president since Harry Truman without a college degree.

On Fairness In The Criminal Justice System

With criminal justice reform as a key debate topic among voters, it could have been interesting to hear Walker's reason for taking a tough stance against offering pardons as governor. Citing a deep belief in the workings of the justice system, Walker refused to issue pardons to anyone convicted of crimes. The five Republicans and Democrats who held the Wisconsin governorship before Walker issued more than 800 pardons during their combined time in office, according to the Wisconsin Center for Investigative Journalism.

In his parting words to voters on Monday, Walker hinted at frustration at the downshift in the political discourse. Though he didn't call out the billionaire real estate mogul by name, Walker said that he intended to step down "so that a positive conservative message can rise to the top of the field." And he encouraged the other GOP candidates in the still-packed GOP field to consider doing the same so that "voters can focus on a limited number of candidates who can offer a positive conservative alternative to the current frontrunner."

With Walker's announced exit on Monday, the Republican primary field is still left with a staggering 15 candidates in the race for President.