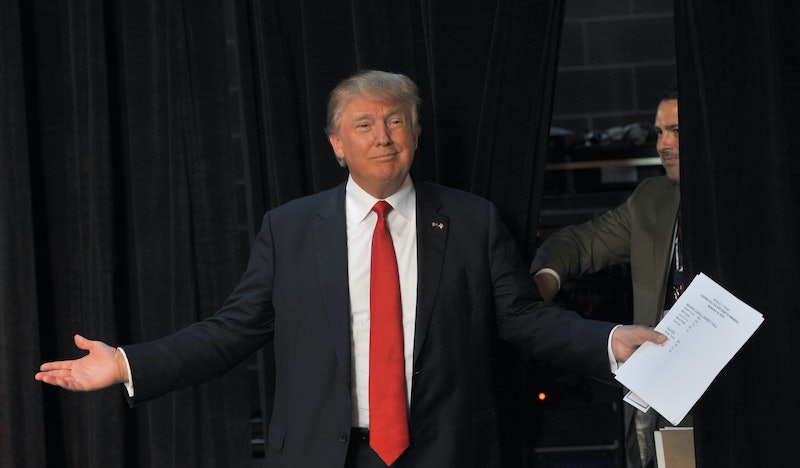 On Monday, Republican candidate Donald Trump hosted a live Q&A session using Twitter to answer direct questions from supporters. The businessman visited Twitter's New York headquarters for the session, according to Politico, and asked his 4 million followers to tweet him questions using the #AskTrump hashtag. As anyone could have predicted, the session backfired and the hashtag was quickly taken over by Trump critics. But before the 30-minute free-for-all ended, Trump's Twitter session skipped over 5 important questions from users on both sides of the Trump camp. Instead of taking the opportunity to show voters substantive reasoning on key policy issues, the candidate and his team seemed to cherry-pick the most basic, friendly questions to answer.

Trump, who is a Twitter pro whether or not you agree with what he tweets, has favored using social media over traditional media to bring his campaign messages straight to voters. Even within the platform's 140-character limit, the candidate has managed to issue lengthy rants about immigration, his poll numbers, and any Trump news du jour. And the format for this Twitter chat played to Trump's strengths. Unlike a Reddit AMA, where a candidate has space to address queries with lengthy, nuanced responses (remember Bernie Sanders' epic AMA session?), Trump's Twitter chat allowed a 20-second video response for each chosen question — hardly a lot of time for deep policy analysis.

So, what happens when you combine a controversial presidential candidate, 4 million Twitter followers, and an open invitation to ask whatever you want? Plenty. Questions posed to the Republican front-runner touched on student debt, gun control, homelessness, and football. Naturally, Trump's team ignored the heckling that Twitter is known for. But several users posed thoughtful, probing questions to Trump this afternoon and were skipped for unknown reasons.

Still, here are some of the questions Trump should've answered during his Twitter chat:

You've Switched Parties Five Times. Can You Tell Us Why?

Others have asked the Republican candidate about party allegiance before, but not quite in this way. More than just asking about Trump's current ties to the Republican Party, this could have been an opportunity for Trump to talk about how and why his political position has evolved over time.

What Will You Do About Police Brutality?

This may not be a topic that resonates as deeply with conservative voters, but it will certainly be a hot-button topic in the general election. And with no history of policy-making to point toward, Trump's positions on criminal justice reform and policing are somewhat of a question mark.

Last week, Trump failed to correct a supporter at a town hall who said that President Obama was a Muslim — as though that would somehow be a bad thing. The Trump supporter then went on to make inflammatory statements about Muslim Americans in general. If Trump is serious about being president of the entire United States, he might start by stating that discriminating against anyone on the basis of religion is simply unacceptable.

Should Muslim Military Vets Be Able To Become President?

It's likely that this user got Trump's views on Islam mixed up with Ben Carson's recent statements about electing a Muslim president. But the point remains that Trump — and any other candidate for president — should be held accountable for running respectful campaigns, free of bigoted statements about religious groups.

Do You Support An Audit Of The Federal Reserve?

In my ideal world, any serious contender for president would be willing to have an open discussion about the future of monetary policy, especially since banking regulations and insufficient oversight of international banking institutions are considered two of the leading causes for the Great Recession. The Trump team skipped right over this question from a user who apparently had the same hopes.

In the end, the Trump Twitter chat went as you might predict. Trump invited millions of people to literally ask him anything, and their queries ranged from thoughtful, to sarcastic, to simply hilarious. But Trump didn't vary; the billionaire-turned-politician offered more of what his campaign has become known for: broad promises and very little detail.

More like this
Twitter Has *A Lot* To Say About The "Single Penalty”
By Sam Ramsden
Watch Jacinda Arden’s Devastatingly Honest Resignation Speech
By Sam Ramsden
What The UK Blocking Scotland’s Gender Recognition Bill Means
By Sam Ramsden
Jameela Jamil Defends Sam Smith After Trolls Body-Shamed Them
By Jake Viswanath
Get Even More From Bustle — Sign Up For The Newsletter
From hair trends to relationship advice, our daily newsletter has everything you need to sound like a person who’s on TikTok, even if you aren’t.