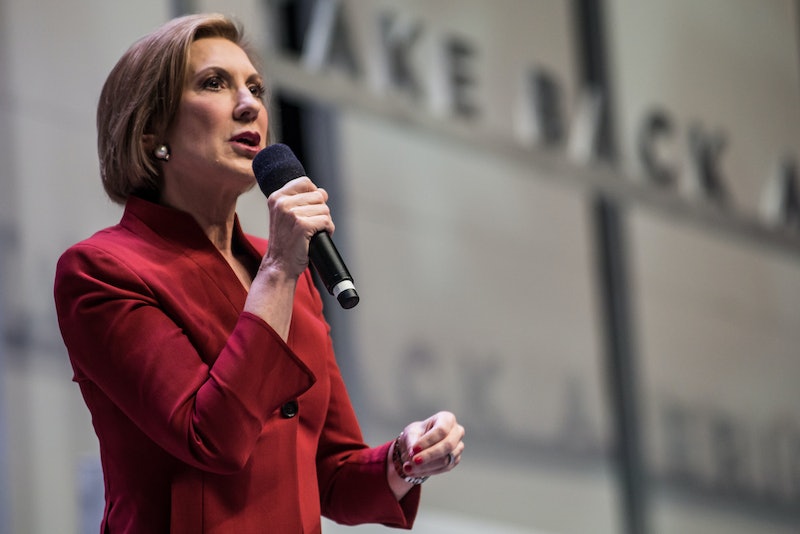 The Obamas have Bo and Sunny. George W. Bush's family had Miss Beazley, Barney, and Spot. And, if she's elected president, Carly Fiorina and her husband Frank will bring her two canine companions with them to the White House. So, what are Carly Fiorina's dogs' names? Max and Snickers are the two Yorkshire terriers that live with the Fiorinas. And, in a particularly funny moment in Fiorina's Monday night appearance on The Tonight Show Starring Jimmy Fallon, the former business executive and presidential contender shared an adorable ritual between her and one of her furry companions.

Fiorina — still riding the wave of her commanding second debate performance — was relaxed and downright funny in her Tonight Show appearance. Fallon and Fiorina opened by discussing Vladimir Putin, and the Republican shared how she would approach the Russian leader. But then the conversation quickly devolved into major cuteness.

Fiorina told Fallon she often would sing to her pups and then shared the tune she made up about her dog Snickers who hates going out for walks. Breaking into the tune from "Rock Around The Clock," Fiorina sang:

My name's Snick and you're going to have to carry me...

This was Fiorina's second appearance on the late-night talk circuit and she's proven to be an entertaining guest, able to handle the quick banter and campaign questions with humor and grace. Back in May, Fiorina appeared on Late Night With Seth Myers and did an impressive job handling Myers's questions about slip-ups in her campaign, which had just gotten underway.

The former Hewlett-Packard CEO vaulted to second place in the polls after her strong performance in last week's Republican debate. While Trump is still the front-runner, CNN's recent polls showed that his support slipped from 32 percent to 24 percent. Fiorina leaped from 3 percent in early September to 15 percent following the second Republican debate.

More like this
Watch Jacinda Arden’s Devastatingly Honest Resignation Speech
By Sam Ramsden
What The UK Blocking Scotland’s Gender Recognition Bill Means
By Sam Ramsden
Man Meets Politics: ‘Boy Meets World’ Star Ben Savage Is Running For Congress
By Jake Viswanath
What Is Pamela Anderson’s Net Worth? She Was Never Paid For Her Stolen Sex Tape
By Hugh McIntyre
Get Even More From Bustle — Sign Up For The Newsletter
From hair trends to relationship advice, our daily newsletter has everything you need to sound like a person who’s on TikTok, even if you aren’t.