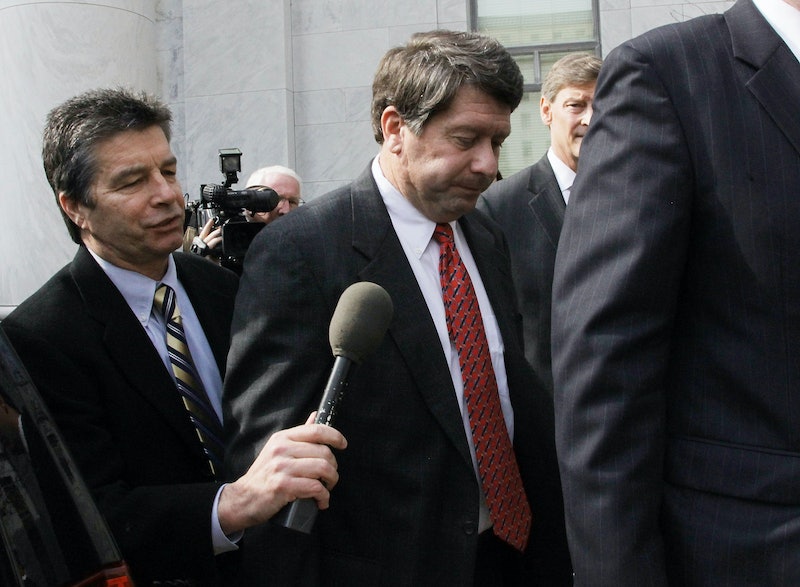 On Monday, a federal judge in Georgia sentenced the former head of the Peanut Corporation of America for his role in a nationwide salmonella outbreak. Who is Stewart Parnell? He was convicted in 2014 on 72 counts of fraud, conspiracy, and shipping tainted food across state lines. And this week, Parnell, 61, received an unprecedented 28 years in prison for one of the nation's largest-ever food recalls.

According to the Associated Press, Parnell started in the peanut business in Lynchburg, Virginia, in the 1970s. In a separate story, the Associated Press reports that Parnell and his brother, Michael, 56, were successful and respected industry leaders, having turned a small $50,000-a-year company into a $30 million business by the time they sold it in 1995. Parnell launched Peanut Corporation of America in the early 2000s and quickly turned the processing plants into an influential industry force. The PCA acquired sites in Georgia, Virginia, and Texas and was soon processing millions of pounds of peanuts per month for clients that included several of the nation's biggest food brands: Kellogg's, Frito-Lay, Jenny Craig, Sara Lee, and Little Debbie. Parnell himself became an adviser to the federal government on peanut quality and regulation.

Then, in 2008, a salmonella outbreak that killed nine people and sickened 714 across 46 states was traced back to peanut paste from Parnell's processing plants. Federal investigators found evidence that Parnell had approved sending products from plants that had tested positive for salmonella. More than 2,000 products made with PCA peanuts were pulled from shelves in the biggest food recall in U.S. history.

Ken Hodges, one of Parnell's defense attorneys, told TIME magazine recently that Parnell and PCA executives were "doing exactly what the rest of peanut industry was doing at the time. Neither he nor the peanut industry appreciated the significant problems that salmonella could cause. There is no way he believed for a moment that his product was harmful."

Food safety critics have long said that uneven application of food safety laws is a problem for the industry overall. Food safety lawyer Bill Marler told TIME that the tough verdict in the Parnell case is warranted, but has added more uncertainty to the industry.

One of the things that the FDA and U.S. attorneys are going to have to struggle with is, if you go down this road, how far are you going to go? That’s the dialogue that the public and prosecutors need to have.

Still, food recalls and company liability complaints usually lead to civil judgments; it isn't often that you hear about criminal charges. That's another place where Parnell and the PCA case have made history. Prosecutor Michael Moore told CNN that he hoped the conviction and sentencing would send a strong message to officials in the food industry.

The former Peanut Corporation of America executive received a virtual life sentence for knowingly shipping contaminated food — the first federal conviction and the toughest penalty so far for an executive in a food safety case. Parnell had been facing up to 803 years in prison.

More like this
A New Netflix Doc Will Explore The Unsolved Murder Of Jill Dando
By Sam Ramsden
This First Look At 'The Gold' Shows Jack Lowden In A Whole New Light
By El Hunt and Sam Ramsden
12 Aphrodisiac Desserts To Spice Up Your Valentine’s Day
By Kaitlyn Wylde
15 Black-Owned Liquor & Wine Brands To Add To Your Bar Cart
By Alexis Morillo
Get Even More From Bustle — Sign Up For The Newsletter
From hair trends to relationship advice, our daily newsletter has everything you need to sound like a person who’s on TikTok, even if you aren’t.