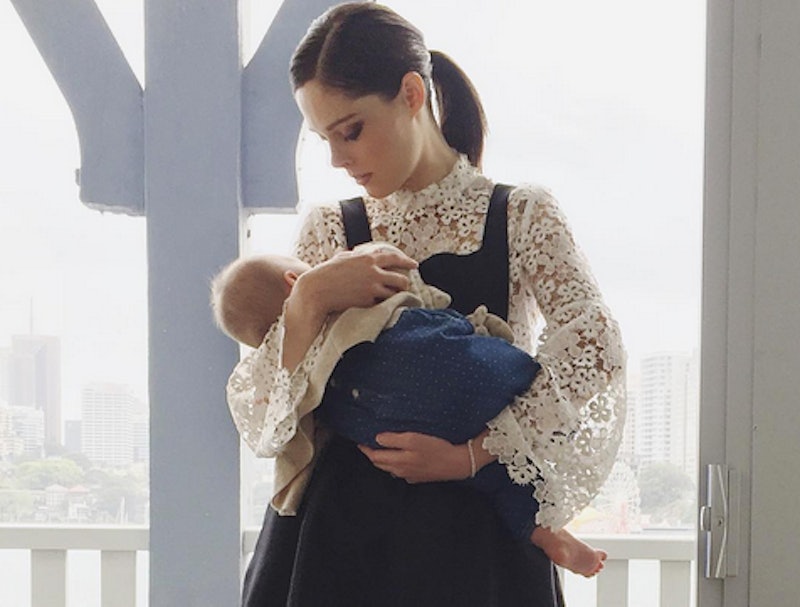 While we've all read our fair share of breastfeeding-shaming stories, women who opt not to breastfeed also endure a good deal of scrutiny, too — both online and off. The Internet's latest victim? Model and new mother Coco Rocha, who came under fire for bottle-feeding her infant formula this week. As she later explained, she feeds her baby formula because her milk went dry several months ago. But the fact that the mom of one even felt like she had to defend her decision to strangers is yet another reminder of just how badly mom-shaming needs to stop.

The social media firestorm began on Monday when Rocha took to Instagram, praising the delivery service GoButler for getting her six-month-old baby formula with ease. However, users were less than concerned with the services and more focused on giving her “unwanted advice” on how her newborn should be fed. Several since-deleted comments came through that caused many a fan to jump to her defense. "Woah, kinda judgey there," wrote user ascia_akf in response to a previous comment. "I'm a huge breastfeeding advocate but there's no need to butt in on her personal choices. I'm sure she has her reasons for not breastfeeding." Added lovelymaria_28: "UGHHH here come all [the] mothershamers!! It's not your baby, don't worry about it!!! It looks like she's done a wonderful job with her baby Ioni and that's all that matters!"

Rocha didn’t take the unsolicited opinions too kindly either, though, and immediately used her platform to address the naysayers herself. In a comment on the post, the model explained how she did breastfeed for "the first 5 months of her life," yet stopped after she was unable to produce milk one day. She also took a minute to inform her followers that, yep, this occurs to lots of moms out there, and at all different stages postpartum.

"She's been on formula for a few weeks now and seems to be doing just fine," Rocha continued, of her daughter Ioni. "In the last 4 weeks she gained another 2 pounds, grew another inch and is in the 90th percentile for her age. Anyone who has a negative comment to make on the way I raise my baby will be blocked. This is not a democracy, everyone doesn't get a say."

Rocha's response is pretty pitch-perfect, and deserves a virtual fist bump from all of us. But it does beg this question (for the millionth time): Why are new moms so harshly judged for all their choices to begin with? Though time and time again women are shamed for breastfeeding in public (or even at all), Rocha's story reminds us that even new moms who decide not to breastfeed can also deal with a whole lot of personal guilt, too. And sadly, this kind of mom-shaming stuff is pretty universal. Last year, Britain's Liberal Democrat equalities minister Jo Swinson made headlines when she gave a speech shortly before taking her own maternity leave, commenting on the stigmas of breastfeeding and going back to work, and the unnecessary stress it causes. In a nutshell, Swinson told new British parents to focus on being the best parents they can be, regardless of social pressures.

"I think we need to get away from this guilt culture in terms of judging other people's decisions as parents. It is difficult enough and it is not necessarily for others to judge," she commented. Though Swinson claimed there was strong pro-breastfeeding evidence, she said that “[t]here is...far too much guilt generally in society around parenthood, about whether or not you breastfeed or whether or not you bottle feed…[I]t shouldn't mean we make people feel bad if they can't do that for some reason.”

To Rocha's point, from low milk flow to blocked milked ducts to mastitis, there are plenty of reasons why a woman can be in short supply of breastmilk and turn to formula. And there are even more reasons why it can be uncomfortable — and even painful — to breastfeed. So what should be said of women who simply choose to forego breastfeeding? Taking notes from Rocha and Swinson, the best thing to say about a woman’s breastfeeding choices — and parenting style in general — is... yep, you guessed it: Nothing at all.

More like this
Selena Gomez Dismissed Trolls' Comments About Her Body After The Golden Globes
By Stephanie Topacio Long
25 Inspiring Quotes From Black Women To Celebrate Black History Month
By Kyli Rodriguez-Cayro and JR Thorpe
Twitter Is Identifying With Sally Field & Jane Fonda’s Friendship In New Viral Video
By Jake Viswanath
Annie Rauwerda Finds Treasure In The Depths Of Wikipedia
By Chloe Foussianes
Get Even More From Bustle — Sign Up For The Newsletter
From hair trends to relationship advice, our daily newsletter has everything you need to sound like a person who’s on TikTok, even if you aren’t.