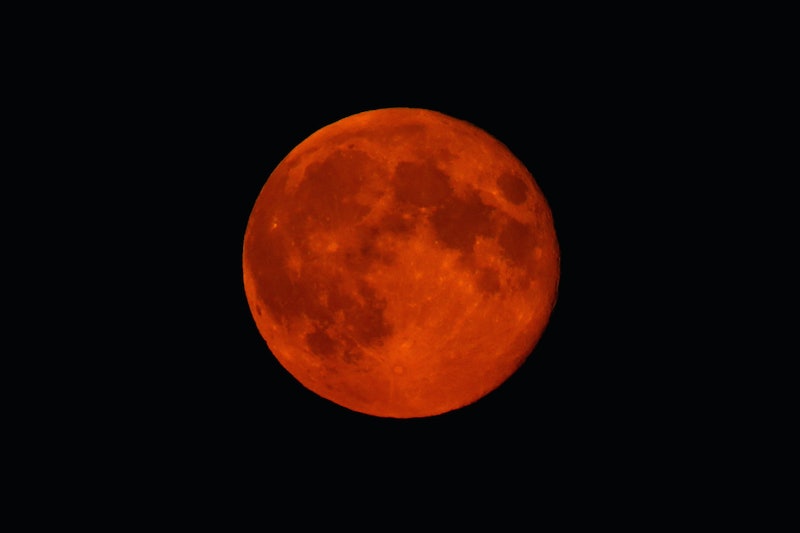 If you're familiar with famous doomsday cults and conspiracy theorists, you might have already cleared your calendar of any appointments past this Sunday, Sept. 28. That's the day, according to some religious circles, that a giant asteroid is predicted to crash near Puerto Rico, ending all life on Earth. Before you get nervous, NASA officials have said it's safe to relax. NASA's Near-Earth Object Observations Program says that no celestial objects are coming anywhere close to the Earth in the foreseeable future. Feel free to make plans for October.

What caused all this doomsday panic? Some are blaming this Sunday's rare eclipse of the supermoon. The supermoon — also known as the "harvest moon" because of its annual appearance at the start of the autumn season — happens when the moon passes close to the earth. The result is a full moon that appears roughly 20 to 30 percent larger in the night sky. But it's only every thirty years or so that the supermoon arrives at the same time as a lunar eclipse, producing the copper-colored phenomenon known as the "blood moon." And, while there's a perfectly rational scientific explanation for the moon's reddish hue this weekend, others have connected the blood moon with global disaster.

As a society, we're almost as fascinated with the end of the Earth as we are with its origins. But when it comes to predicting the end of the world, our record for getting things right has been pretty appalling. (So far, at least.)

So, to help ease the minds of anyone who might still be worried about our pending extinction, let me draw your attention to these six doomsday theorists who (again: falsely!) predicted the end of the world.

Perhaps the most popular, or at least the most widespread, prediction of doom was connected with the arrival of the year 2000. Tech gurus warned that the world's computers would be unable to cope with double-zero year and predicted global catastrophe as systems that operated everything from personal technology to air traffic and missile systems all shut down. For months, people prepared for the worst. And on the morning of Jan. 1, 2000 — thanks to a few software patches — the world kept right on spinning.

David Koresh And The Branch Davidians

As leader of Branch Davidians, David Koresh claimed that he had interpreted an ancient prophesy in the Book of Revelations that pointed to a coming apocalypse. Koresh directed his followers, who lived in a compound in Waco, Texas, to begin amassing weapons to defend themselves. On Feb. 28, 1993, the federal Bureau of Alcohol, Tobacco, and Firearms raided the compound. The Davidians, believing Koresh's prediction had come true, held off the federal agents for 51 days. On April 19, 1993, David Koresh died of a self-inflicted gunshot wound to the head after federal agents infiltrated the compound to free the Branch Davidians.

Jim Jones And The Jonestown Massacre

Jim Jones, also known as the "Mad Messiah," wrongly predicted that the earth would end in nuclear war in 1967. When that didn't happen, he founded a group called the People's Temple and set up a commune in a remote part of Guyana they named "Jonestown." On Nov. 18, 1978, the group became notorious when the nearly 1,000 residents died in a mass murder-suicide.

Members of Heaven's Gate believed that the arrival of Haley's Comet in 1997 was actually a UFO arriving to take the faithful away from the doomed Earth. Cult leader Marshall Applewhite convinced the group that he was a descendent of Jesus Christ and that the members needed to leave the planet so that it could be cleansed. The 39 members were discovered on March 26 after an apparent mass suicide. On the group's website (which is still going strong), members posted a press statement explaining their expected departure on March 22, 1997:

By the time you receive this, we'll be gone -- several dozen of us. We came from the Level Above Human in distant space and we have now exited the bodies that we were wearing for our earthly task, to return to the world from whence we came -- task completed. The distant space we refer to is what your religious literature would call the Kingdom of Heaven or the Kingdom of God.

While certainly not a religious cult, the Mayans predicted the end to a "great cycle" on Dec. 21, 2012. Many took that prediction to mean the end of the world, since the calendar itself ended on that date. When the date passed without incident, archaeologists explained that the Mayans saw 12/21/2012 not as an apocalypse, but as the start of a new and better age for mankind.

While it hasn't actually been disproven yet, I'll be an optimist and add this one to the list. Texas minister John Hagee is one of the leading voices predicting the arrival of Armageddon this month. In a video to promote his book, Four Blood Moons, Hagee points to this month's eclipse is the last of a series of blood moons predicted in the Bible:

Every heavenly body is controlled by the unseen hand of God, which signals coming events to humanity. There are no solar or lunar accidents. The next series of four blood moons occurs at Passover and Sukkot in 2014 and 2015.

Without naming Hagee or his prediction, NASA officials say the Earth is in no danger. In a statement posted on the website of NASA's Near-Earth Object office, manager Paul Chodas said, "There is no scientific basis - not one shred of evidence - that an asteroid or any other celestial object will impact Earth on those dates."

More like this
6 Organizations Fighting Police Brutality That You Can Support Right Now
By Syeda Khaula Saad and JR Thorpe
This Is When Netflix Is Going To Start Charging You For Sharing Passwords
By Darshita Goyal
Twitter Has *A Lot* To Say About The "Single Penalty”
By Sam Ramsden
Watch Jacinda Arden’s Devastatingly Honest Resignation Speech
By Sam Ramsden
Get Even More From Bustle — Sign Up For The Newsletter
From hair trends to relationship advice, our daily newsletter has everything you need to sound like a person who’s on TikTok, even if you aren’t.