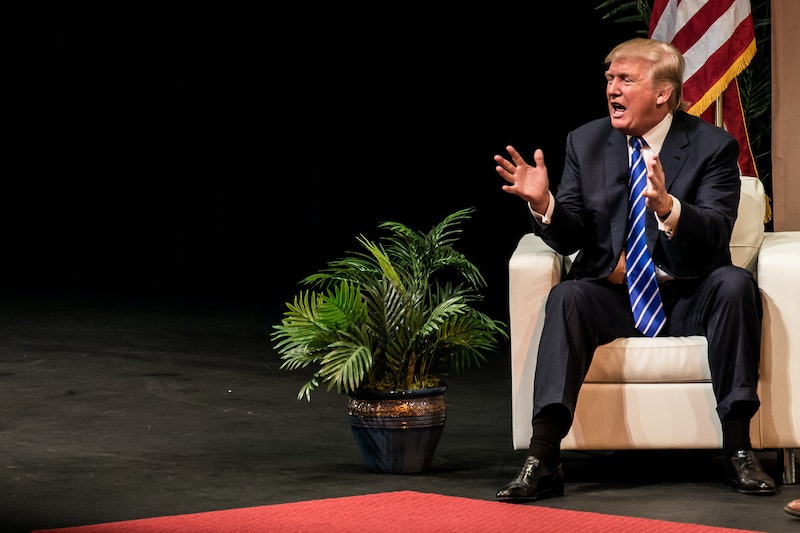 Most of the Republican presidential candidates have a problem accepting that climate change exists — or more specifically, that humans are having a measurable impact on the environment. The GOP argument against climate change is pretty basic: "I'm not a scientist, but no science has convinced me that there's a problem." Sometimes, a candidate may add on a bit about how bad environmental emissions standards are for businesses, which just want to employ hardworking Americans. But even by GOP standards, Donald Trump's explanation of climate change is pretty remarkable. It's not surprising that the businessman-turned-politician would fail to see climate change as a problem. But what is remarkable is the train of thought that apparently led him to his position.

In an exchange with the hosts of CNN's New Day Thursday, Trump outlined a perspective on climate change that was both confusing and sadly predictable. He was asked for his thoughts on environmental issues in light of Pope Francis' bracing message on climate change during his White House address Wednesday. In his televised remarks from the South Lawn of the White House, the pope framed the changing environment as a moral issue, calling climate change "a problem which can no longer be left to a future generation."

No. I think that clean air is a pressing problem. You want to have clean air, clean water. That's very important to me, and I've won many environmental awards. I am not a believer in climate change.

Trump went on to deny that extreme weather shifts might pose a problem, though he seemed to confuse short-term weather patterns with long-term changes in the environment:

This is not the first time Trump has denied that climate change is a major issue. Earlier this week, he told radio talk show host Hugh Hewitt that he believed global warming was nonsense. In an interesting twist, Trump used examples of — you guessed it — extreme shifts in weather patterns over time.

Trump may have good reasons for sticking to his guns on this one. There have been reports that denying climate change has proven lucrative for GOP candidates. Trump and other Republican presidential hopefuls Carly Fiorina, Rick Perry, Jeb Bush, Bobby Jindal, Lindsey Graham, and Ted Cruz reportedly received more than $62 million from wealthy donors tied to the fossil fuel industry. Still, this appears to be an area where Trump's position has remained unchanged for some time. In 2012, the real estate mogul tweeted his belief that climate change was "created by and for the Chinese."

More like this
6 Organizations Fighting Police Brutality That You Can Support Right Now
By Syeda Khaula Saad and JR Thorpe
Watch Jacinda Arden’s Devastatingly Honest Resignation Speech
By Sam Ramsden
What The UK Blocking Scotland’s Gender Recognition Bill Means
By Sam Ramsden
23 Super Sweet Things To Write In A Valentine's Day Card
By Karen Belz and Lexi Inks
Get Even More From Bustle — Sign Up For The Newsletter
From hair trends to relationship advice, our daily newsletter has everything you need to sound like a person who’s on TikTok, even if you aren’t.