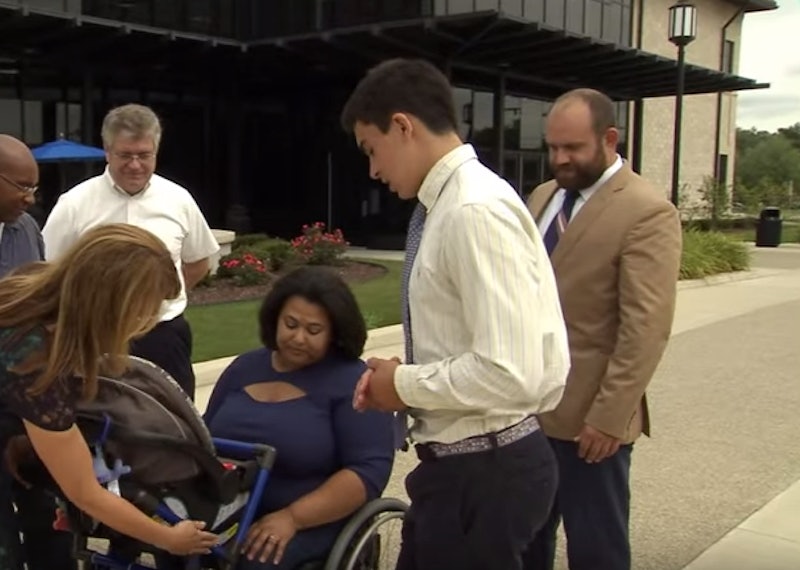 Being able to push a baby stroller around is something that many of us take for granted. But for parents who get around using a wheelchair, that seemingly simple task can be difficult — even impossible. Enter University of Detroit Jesuit High School senior Alden Kane, whose stroller invention helps wheelchair-bound parents get around easier while pushing their babies. Considering how 2.2 million Americans use a wheelchair for day-to-day living, it’s pretty shocking that it took this long for someone to invent it. But I know someone who's pretty grateful to the 16-year-old: Sharina Jones, the Michigan mom and paraplegic who was the lucky recipient of Kane's prototype.

"A lot of my friends have babies and they are out, running with their babies in the stroller and I thought, 'What am I going to do?'" Jones told Fox 2 Detroit. Disabled since the age of five following a tragic gun accident, the Michigan mother now lives an active life, having learned to adapt. But becoming a mom means facing a whole new set of challenges.

Thankfully, Jones' life just got a whole lot easier thanks to Kane's invention, which fulfills her very basic need to get around with her baby in tow. It was during a STEM class that Kane first got the idea to built a stroller that seamlessly (and comfortably) attaches to the front of a wheelchair, using lightweight steel tubing that easily allows parents to snap in their baby's car seat. "The biggest priority is to make it safe for baby, of course," Kane told FOX 2. "And then, also you really want to make it independent for the mother." It looks like the six months Kane worked on the invention definitely paid off, though there's no word yet on if it will go to market.

Kane's not the only student out there using smarts to change lives. Here are more brilliant teens and college kids who put their ingenuity and a little hard work together to do some good:

This Kid Created A Gadget To Help The Blind

In July, Alex Deans, an 18-year-old student from Windsor, Canada, created an invention that aims to increase the ease of mobility for the blind. After a blind woman told Dean that nothing on the market currently provide a 360-degree perspective of their surroundings, he developed iAid. It's a tool that uses GPS and ultrasonic technology to help the visually impaired get around with ease. Comprised of a belt-like object and joystick, iAid uses sound waves which bounce off nearby objects, letting users know how close they are to them. Intending to sell the product for between $50-$70, Deans is working to lower the cost even more so that more sight-impaired individuals can benefit from iAid.

Not only are teens helping parents, but they are also taking on devastating conditions that affect children’s livelihoods. Afflicted with Spinal Muscular Atrophy Type I, 16-month-old Lylah Gritter is unable to move on her own accord. However, several Grand Valley State University students in Michigan dedicated their time to changing this, creating a "play and mobility device" which allows Gritter to control her own movements with a joystick. This has given the toddler a whole new sense of control and independence. But the team isn’t just stopping there — they're also developing a tool to help the little girl gain command of their arms.

Finally, there’s South Carolina high schooler Jared Adams. Personally afflicted with a gait disorder at a young age, the 18-year-old has been committed for some time to helping improve the walking patterns of patients with disabilities like cerebral palsy. Though physical therapists try their best to improve gait, it can be difficult to increase muscle strength at the same time. Adams’ creation solves both: For individuals whose legs cross over, Adams' revolutionary brace can be used by professionals to gradually separate their legs and help their foot placement and stride length. Moving forward, the senior hopes that the device can be sold at an affordable price, allowing physical therapists to easily incorporate the tool into their regimens. "There aren’t enough engineers and innovators in the field of rehabilitation and in the field of therapy that are looking for these problems."

Thankfully, it looks like there soon will be, if these genius kids are any indication of what the future holds. Bring it on, Gen Z.

More like this
Ashamed Of Your Screen Time Stats? Here's How To Change That
By Alexis Morillo
How To Turn Off TikTok Profile Views So You Can Stalk Other Accounts In Secret
By Alexis Morillo
How Ovulation Affects Your Sense Of Smell, Libido, & More
By JR Thorpe and Lexi Inks
An Expert Weighs In On The Viral Raw Carrot Salad Trend
By Alexis Morillo
Get Even More From Bustle — Sign Up For The Newsletter
From hair trends to relationship advice, our daily newsletter has everything you need to sound like a person who’s on TikTok, even if you aren’t.