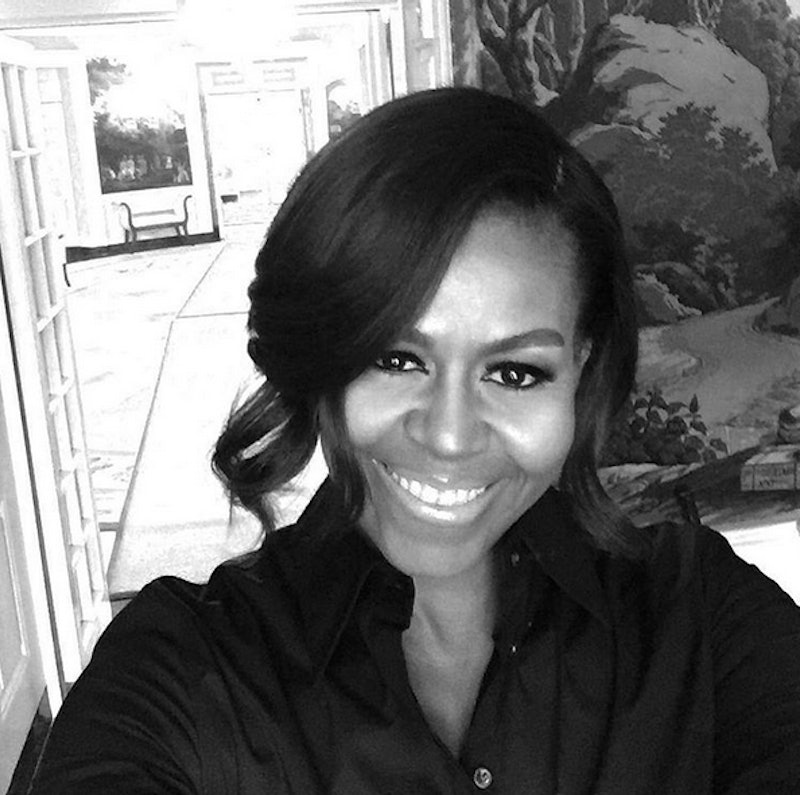 Despite the many amazing strides we've made for women in the last century, the fact is, gender is still a huge obstacle in many regions of the world — especially when it comes to getting an education. During the Global Citizen Festival in New York's Central Park Saturday night, First Lady Michelle Obama called attention to this fact with one pretty alarming stat: 62 million women are without access to education in the world today; and it's up to the rest of us to change that. Hence the reason why Michelle Obama has launched the #62MillionGirls social campaign, which intends to make that sobering statistic a thing of the past once and for all.

"I see myself in these girls," the First Lady said in a pre-taped message played before the crowd. "I see my daughters in these girls. These girls are our girls, and I simply can't walk away from them. So for me, this is truly a moral issue."

If the hashtag #62MillionGirls sounds familiar, that's because the concept for the campaign itself didn't exactly come out of nowhere. It's in partnership with Girl Rising, the comprehensive measure aimed at attacking poverty by promoting worldwide education. Both are part of Let Girls Learn, an even larger project unveiled by the First Lady and President Obama this past March.

But thanks to Michelle Obama's Saturday night speech, #62MillionGirls has been lighting up Twitter and Instagram for the last few days, helping to raise awareness to an issue that often goes unnoticed. From Charlize Theron to Coldplay, tons of celebs have come out in support of the campaign by reflecting on the influence education had — and continues to have — in their own lives. "In school I learned to pretend I read Moby Dick. #62MillionGirls don't have that chance," Stephen Colbert tweeted, along with a dapper photo of a much-younger him — donning an adorable bow-tie. But Colbert's throwback photo is just one of many celeb posts that range from hilarious to heartwarming.

Though the First Lady may be at the forefront of #62MillionGirls, she's not the only one in Washington that's shouting the many benefits of universal education on Twitter.

While celebs and politicians have been keeping the conversation going on both Twitter and Instagram, so have thousands of other users. People from all over the world have been sharing everything from recent selfies to throwback photos from their childhood, along with personal stories of just how their own education shaped the person they are today. Each one is more inspiring than the next.

As the campaign builds momentum, the photos being compiled over at 62MillionGirls.com are creating a pretty beautiful mosaic of women — sharing their pride over reaching their own full potential, while expressing their wish for others to have the same opportunities. In the process, #62MillionWomen is blurring a dividing line, and teaching more than just 62 million women out there that empowerment is a group effort, and it comes with benefits for everyone involved.

More like this
Watch Jacinda Arden’s Devastatingly Honest Resignation Speech
By Sam Ramsden
Ashamed Of Your Screen Time Stats? Here's How To Change That
By Alexis Morillo
Annie Rauwerda Finds Treasure In The Depths Of Wikipedia
By Chloe Foussianes
Learning To Love, Not Judge, The Lunchbox Wives Of TikTok
By Esther Zuckerman
Get Even More From Bustle — Sign Up For The Newsletter
From hair trends to relationship advice, our daily newsletter has everything you need to sound like a person who’s on TikTok, even if you aren’t.