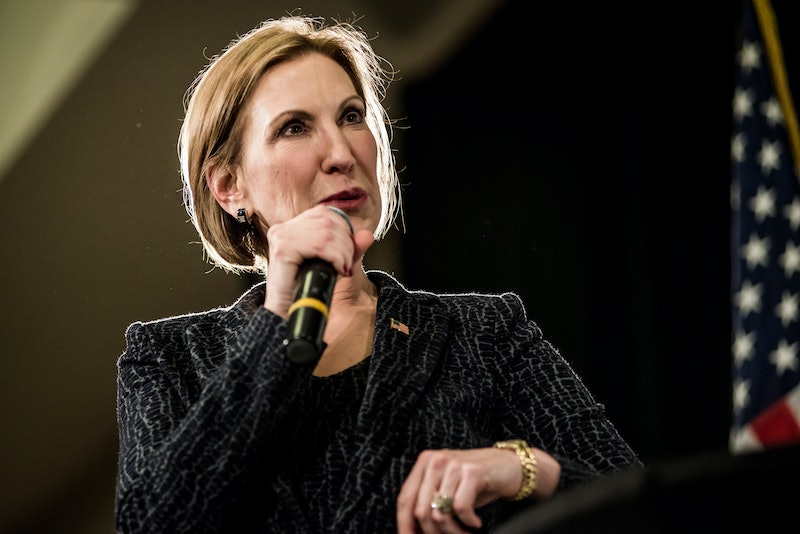 Republican presidential candidate Carly Fiorina is not shy about her pro-life stance. Ever since her 2010 campaign to become a California senator, Fiorina has been clear about her stance on abortion — she opposes it except in cases of rape, incest, and endangerment of the woman. This is a conservative stance, although it is more progressive than that of Jeb Bush, who in 2003 hired an attorney to represent the unborn fetus of a mentally disabled rape victim in Florida. But a closer examination of her positions on specific pieces of recent and current legislation show inconsistencies in her views on abortion.

She has been clear about her pro-life feelings since the beginning of her campaign. Fiorina wrote a column on the Susan B. Anthony List ("the Voice of Pro-Life Women in Politics") outlining her pro-life views. According to Fiorina, her mother-in-law was advised to abort the child who eventually became her husband. Because of this, the issue is an emotional one for her. She says she is sympathetic to women who face the choice of continuing or terminating a pregnancy. She says these women "deserve options, ones that are available now more than ever due to advances in modern medicine," but does not elaborate on who deserves what kind of options. Normally, giving a woman options is a stance advocated by the pro-choice side.

Lately, Fiorina has been one of the most outspoken voices concerning the attempt to defund Planned Parenthood. She made an emotional appeal regarding Planned Parenthood at the last Republican presidential debate when she dared Hillary Clinton and President Obama to watch what she claimed was a video of a fully-formed fetus kept alive by doctors to "harvest its brain." Of course, the limitations set by debate format prevented her from clarifying on the video, which did not actually show any fetal harvesting. But already, we see her inconsistency. If Fiorina claims she wants women to have options, divesting federal dollars from Planned Parenthood is certainly a counterproductive move as it takes options away from many women (and men, for that matter).

Although Planned Parenthood has spoken out against Fiorina's statements, and despite political fact-checkers' insistence that her statement at the debate was inflammatory and untrue, she stands by her words. When she appeared on NBC's Meet the Press on Sept. 26, Fiorina repeated her claim that the organization sells fetal tissue illegally for profit: "Planned Parenthood is aborting fetuses alive to harvest their brains and other body parts. That is a fact."

Fiorina wins points for conservative voters because of her impassioned attack on Planned Parenthood. She has a personal connection to this issue that other Republican candidates cannot match. Moreover, as Republican strategist Katie Packer Gage told The Washington Post, because she is a woman, it is more difficult for pro-choice opponents to call her a sexist who wants to tell women what they can and cannot do with their bodies.

[Fiorina] gets a lot of latitude because she's a woman. It takes away a lot of the critiques that the Democrats usually launch at us — that Republicans are a bunch of old, grouchy men that want to keep women barefoot and pregnant.

She's not an evangelical or even particularly religious; a 2010 New York Times profile described her as "an irregular churchgoer." But Fiorina believes science is on her side when it comes to abortion debate. She says so in her column for the Susan B. Anthony List: "At 20 weeks of life, an unborn child can suck his thumb, yawn, stretch, and make faces. An unborn child at 20 weeks IS a human life."

She also writes of her support for the Pain-Capable Unborn Child Protection Act, a failed bill that sought to make abortions illegal after 20 weeks of pregnancy, even for pregnancies that endanger the life of the mother. The bill also attempted to set up complicated barriers for rape victims seeking to terminate an unwanted pregnancy. Endangered mothers, rape victims — these are the very people that Fiorina claimed were the exceptions to her pro-life views. Yet again, she is inconsistent and vague on this issue.

Carly Fiorina says she wants America women to have options regarding reproductive health, yet she is fighting as hard as she can to take those options away. Her own professed stance on legislation proves she is even more anti-abortion than she claims to be.