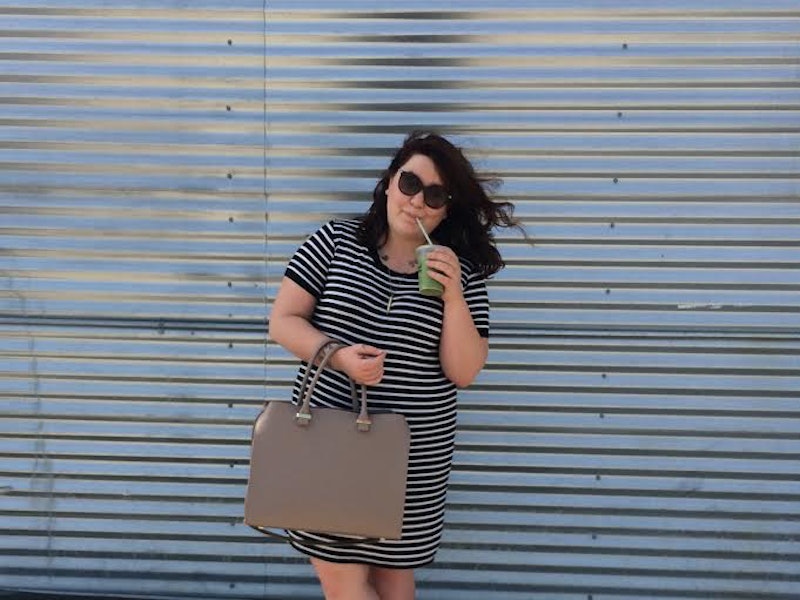 With conversations surrounding body positivity are reaching all-time highs this year, it should be pretty easy for us to detect examples of fat shaming in our daily lives by now. As a result, most of us are hopefully doing our best to avoid intentionally or accidentally body shaming the people in our lives. But what should you do if you see fat shaming happening to a friend — or anyone else — in public or in private? And what should you do when you hear humans using body negative language or talking smack about fat people? Confrontation is hard, after all, especially confrontation about deeply engrained social issues.

There's a part of me that understands why more people don't step in when they see or hear fat shaming going down, but there's an even bigger part of me that wishes that everyone who heard fat shaming would take a stand to step up against it. As a fat person, body shaming language is something I have to deal with on a pretty constant basis. It's not the job of one single person to stand up to fat shamers, though. If size acceptance is ever going to be a reality, I feel it's important for everyone to take efforts at dismantling fat hatred and bias.

Whenever you see harassment, shaming, or verbal abuse happening to other people, it can be hard to decide if it's the right time and place to say something. Hell, it can be hard to know what you can even say to possibly help the situation. Through my organization, Safer Spaces Winnipeg, I train people on how to deescalate and be effective bystanders to all kinds of harassment. From regular concerned citizens to the staff at places like music venues, festivals, and bars, there are a few things that are universal when it comes to intervening when we see harassment happening.

Here are some simple do's and don'ts when it comes to tackling how to handle hearing or seeing fat shaming.

1. Do: Offer Support In Ways Other Than A Verbal Intervention

Sometimes locking eyes and giving a knowing nod can speak louder than words, and is less likely to cause an unwanted or aggressive reaction from a harasser. Knowing that someone sees you and notices what's happening can feel validating when you're in a difficult, potentially emotional situation.

Try to let the person being shamed know that they can ask you for help, allowing them to take the lead. You can also ask a benign question to get things moving, like what time it is or whether they know where a certain coffee shop is.

2. Don't: Blame The Person For What's Happening To Them

Saying things like, "Well that outfit isn't really doing you any favors," or, "They kind of have a point. When was the last time you went to the gym?" are forms of blaming the person for other people's garbage attitudes. They're not "strategies" for avoiding feeling attacked, nor are they "the reality check" your friend needs. It's not the person's fault that people are shaming them, so try to remember that one person's body and lifestyle is no one else's business.

3. Do: Reach Out To The Shamer Privately, If You Can

Sometimes a group or public callout can be helpful and important for inciting change, but most people are more receptive to feedback privately. Taking the time to reach out to the person who has been dishing out harmful attitudes in a non-aggressive way should prevent them from getting as defensive. This also gives you the opportunity to educate them on why what they were saying was harmful, which is more likely to prevent it from happening again.

4. Don't: Make Someone An Exception

If you're going to speak out about fat shaming, it shouldn't just be for the people who "can't help it" because they have some sort of metabolic disorder or anything else that someone might consider an "acceptable" reason to be fat. By saying only some people deserve humanity or some people are more deserving of shaming, you're only perpetuating the larger problem that is body shaming.

5. Do: Remind The Person Of Their Right To Not Experience Harassment And Shaming

No matter what they do, what they eat, how often they do or don't work out, or what they wear, every individual should be afforded respect and human decency. This doesn't change because of their size — or even their health. As long as they're not causing harm to anyone, what they do with their bodies is no one else's concern — no matter how much someone else might think it is.

6. Don't: Assume Someone Else Will Deal With It

I understand having limited energy or feeling exhausted from fighting other forms of inequality and prejudice. However, if you have the ability to say something — especially if you're in a position of privilege in terms of your own size and people's perceptions of your body — then it's a good idea to do so. Bad attitudes and entitlement over other people's bodies arguably exists because we let it keep happening.

The bystander effect is very real and chances that no one else is going to deal with it are high. By saying something, you won't just encourage that person to check their attitude and think before they talk, but you'll also let other people who see or hear you know that you've got their back. It might just help give other folks the permission they think they need to speak up, too.

7. Do: Check In With The Person Who Was Being Shamed Or Who Might Have Been Triggered

If you're in a social setting (including on social media) and someone has just been fat shamed or become the target of Internet trolls, it's good to check in with them as soon as you can. This lets them know you're thinking of them and that they can rely on you. In a world where fat people are shamed both behind their backs and to their face on a regular basis, it's nice to know there are people who are at least paying attention and who can see the problem.

By standing up to fat shaming, wherever we see it, we're able to educate people who have fat shamed themselves and let our friends — and maybe even strangers — know that we see them.

More like this
Instagram & Facebook May Finally Lift Their Notorious Nudity Ban
By Allie Fasanella
Phoebe Dynevor Serves ‘Bridgerton’ Underboob In Stunning Floral Gown
By El Hunt
24 History-Making Black Women You Probably Didn't Learn About In School
By Ayana Lage and JR Thorpe
25 Inspiring Quotes From Black Women To Celebrate Black History Month
By Kyli Rodriguez-Cayro and JR Thorpe
Get Even More From Bustle — Sign Up For The Newsletter
From hair trends to relationship advice, our daily newsletter has everything you need to sound like a person who’s on TikTok, even if you aren’t.