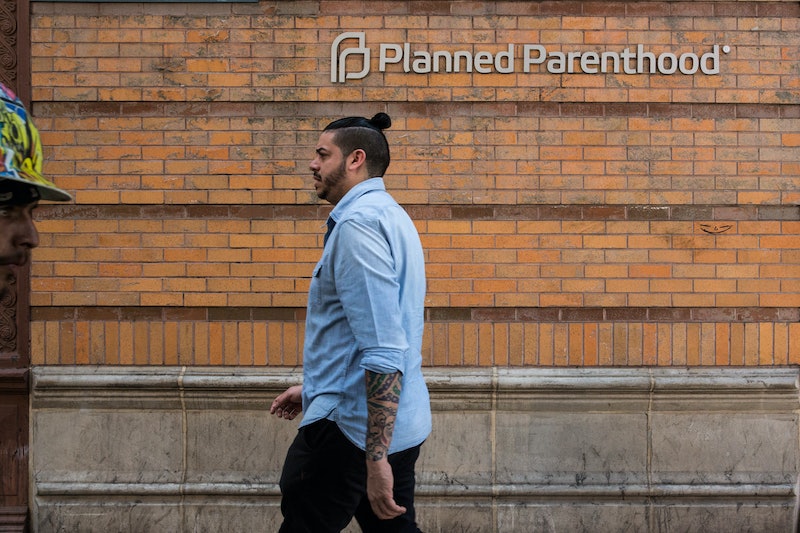 Planned Parenthood sees more than 5 million men and women each year, according to its website. Despite the fact that Planned Parenthood generally seen as a women's health organization, it actually provides services for men too, from sex education to STD testing and treatment. It's not that I'm inserting men into a feminist discussion about women's reproductive rights — but we shouldn't forget that people of both genders stand with Planned Parenthood.

Just as many women who don't go to Planned Parenthood for health care still support the organization, many men do as well, whether it's because they recognize the social benefits to offering sex education and reproductive health services to low-income Americans or because they believe women deserve the right to choose where to receive health care.

Obviously things that provide socially beneficial services ought to be funded by the government — it's a no brainer ... I would even equate it to funding for a library or a hospital, not just a medical service. There's pedagogical services offered by Planned Parenthood — there's education, there's actual services. So, it's strictly in a pragmatic sense that I support it. I don't think it's a question of rights.

I support Planned Parenthood because it has consistently provided vital health care to all sectors of the public, especially to groups that others either can't or won't help. Plus, they do all of that while being consistently opposed by a sizable segment of the population.

Planned Parenthood provides vital services to those who may not have another option for a wide array of important health care needs. It's accessible, convenient, affordable, and most importantly, welcoming.

I support Planned Parenthood because I believe in a woman's right to choose. But regardless on where you stand on the issue of abortion, I think it is absurd to demonize or defund such a marvelous organization that provides affordable healthcare and contraception, and promotes sexual heath in order to reduce the number of unwanted pregnancies in our country and the rest of the world.

I support the rights of Americans — both men and women — to have access to affordable health care services and resources no matter where they live and what their vocation. The most fundamental level of liberty — from which I believe all others we enjoy as Americans emanate — is that of personal choice and the taking of responsibility for those choices. Planned Parenthood is an organization that strives to make all of the above ideals a reality within the established laws of this country; no more, no less. And also because I like watching Republicans squirm when they're forced to talk about "penises" and "vaginas."

I just don't see why it's my business. Politically, I don't think it's up to me whether or not someone is on birth control or gets an abortion. Then moreover, I don't see why I would have the right to deny someone medical coverage they need or want. Also, just from a career point of view, Planned Parenthood helps close the wage gap by allowing women to adjust their personal life with their academic or professional goals.

It didn't hit me until my mother reminded me of how Planned Parenthood helped my family when my sister found a lump in her breast. They do more than abortions... Seeing the government side of the issue, I realize the Republicans don't have a valid argument to defund it. I think its [sic] disgusting and extremely un-American to take away women's rights to proper healthcare and contraception.

I think that Planned Parenthood is very important. People need a place where they can go and feel comfortable with talking about their sexual health. I used Planned Parenthood for STD testing when I was in high school and did not want my parents to know.

Planned Parenthood offers a multitude of services to all kinds of women, particularly those who have little access to quality health care and information. I'd love for all the people denouncing Planned Parenthood to present their plans for providing health care for those women and their children who rely on the organization.

It seems to me that a lot of the people most vocally opposed to Planned Parenthood say they're pro-life. Yet they're eager to stop funding an organization that helps more women and children live, by providing them with vital healthcare. That doesn't make any sense to me.

I stand with Planned Parenthood because if it were the case that males (like me) bore the responsibility of pregnancy, I'm certain it would be well funded and strongly supported. The reality that women carry fetuses shouldn't change that outcome.

It's just obvious! I support it because women shouldn't be afraid of intimacy and sex like how men aren't, so that they have true ownership of their body. Because planned parenthood really is about forming families, but on the terms of the parents and not luck, and definitely not on the terms of the federal government.