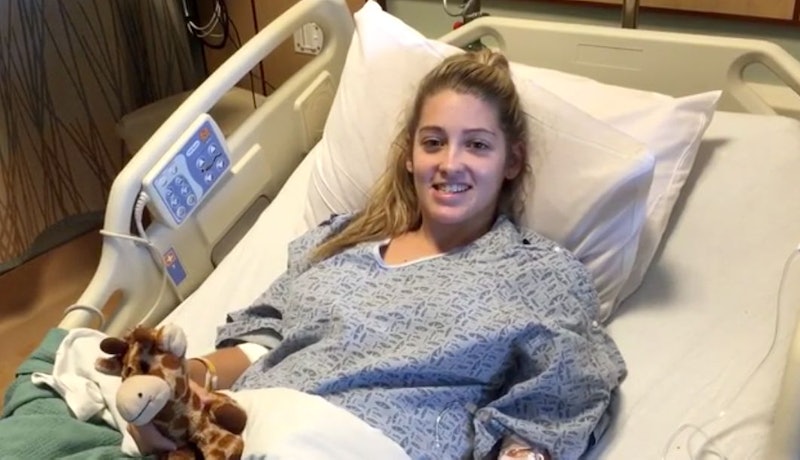 When Riley Benado went to her gynecologist with abdominal pain and a protruding belly last week, the doctor's first guess was that the 18-year-old was pregnant — and apparently lying about being a virgin. It was only after the California teen's pregnancy test came back negative that her doctors realized her symptoms were far more serious: Riley's "pregnancy" was really Stage III ovarian cancer. As news of her misdiagnosis has swept social media in the last few days, the teen has unexpectedly found herself making headline news. But more importantly, her story (and her willingness to share it) has helped spread awareness about the disease to other young women, as well as its warning signs.

According to her blog, Rally for Riley, the teen underwent surgery to remove any infected organs September 26, just three days after she received the diagnosis. Before the operation, Riley blogged that she was both scared and heartbroken. "To know I will never have a child with my own genes and my own characteristics breaks me down," the teen wrote. "Never did I think that at only 18 years old I would be battling such a brutal disease. Because this is so rare for someone at such a young age, I hope that others can become aware of Ovarian Cancer after reading about my story."

Amazingly, Riley's family said in a post-op blog post that the doctors were able to spare her uterus and ovaries. Still, the teen says that her medical team is "baffled" by the type of tumors they found, which means her outlook is uncertain. Thankfully, though, it's clear that she's a real fighter and has a positive attitude.

In the meantime, Riley's fighting for her recovery just about as hard as she's fighting to raise awareness for others just like her. And it's no wonder — while ovarian cancer in women under 40 is super rare, it does happen. Here are some things every woman needs to know.

There Are Different Types of Ovarian Cancer

As if cancer diagnoses aren't already complicated enough, there are multiple types of ovarian cancer, based on the type of cell where it starts. According to the Ovarian Cancer National Alliance, the most common form of ovarian cancer involves epithelial tumors, which develop in the thin layer of tissue surrounding the ovaries. This typically afflicts post-menopausal women. (In fact, more than half of all ovarian cancers are found in women over 63.)

Much less common in general, but more prevalent among young women, is the type of ovarian cancer that develops in the cells that form eggs. Even rarer is "small cell carcinoma of the ovary," which accounts for only 0.1 percent of all ovarian cancer cases — but has a median age at diagnosis of 24. Finally there are stromal carcinoma tumors, which come from "the connective tissue cells that hold the ovary together and those that produce the female hormones estrogen and progesterone."

Ovarian Cancer Symptoms Are Easy To Overlook, So Be Aware Of What's Normal For Your Body

One big problem with diagnosing ovarian cancer is that early warning signs are also symptomatic of something like, say, pregnancy. As the Mayo Clinic explains, "Early-stage ovarian cancer rarely causes any symptoms. Advanced-stage ovarian cancer may cause few and nonspecific symptoms that are often mistaken for more common benign conditions, such as constipation or irritable bowel."

The most common signs include abdominal bloating, pelvic discomfort, weight loss and changes in bathroom habits, such as needing to pee more. Women with family histories of ovarian cancer are advised to keep an extra-close eye out for any of those symptoms.

There Are Ways To Reduce Your Risks

Although it's impossible to completely eliminate the risk of ovarian cancer, you absolutely can be proactive about warding it off. One easy way to reduce the risk is to take birth control pills — so talk about a potential win-win! An analysis of more than 20 studies found that taking oral contraceptives for one year decreases a woman's chance of developing ovarian cancer by 10 to 12 percent. Keep on taking the pills for four more years, and the risk of getting ovarian cancer is slashed in half.

Women at increased risk of the disease because of family history may also consider more extreme measures, such as tubal litigation or hysterectomies. Angelina Jolie famously decided to have her ovaries and fallopian tubes removed because she has a mutation of the BRCA1 gene, which seriously elevated her chance of getting both ovarian and breast cancer, which had already claimed the lives of her family members.

The moral of this story? It's key to be tuned into your body and know your risks based on our family history. And as always, when in doubt, find a doctor who will take your concerns seriously.