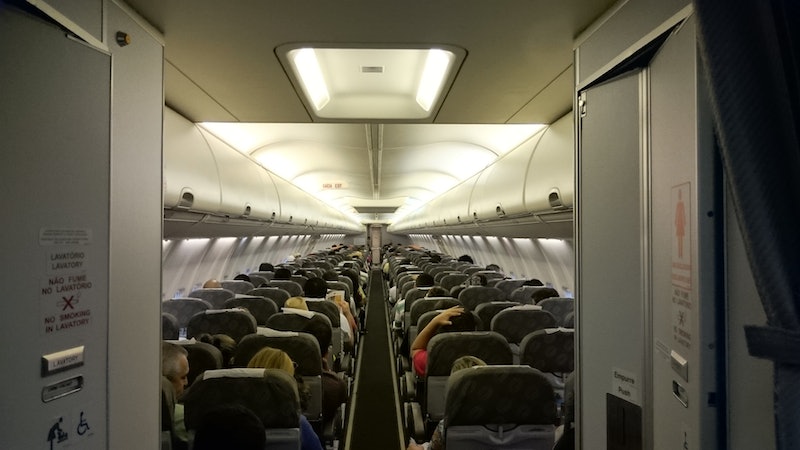 To say that flying with an infant is difficult is... well, maybe the biggest understatement ever. For one thing, there's all that stuff you have to bring along with you, making the process of getting through security a special kind of nightmare. There's also the very real fear that your tiny human will cry its head off the entire flight and make everyone around you instantly regret their seat choice. That bit is precisely why new mom Rebekka Garvison is eternally grateful for people like Nyfesha Miller, who helped comfort Garvison's crying newborn, Rylee, on a 6 a.m. flight from Chicago to Atlanta on Sept. 24. Hours later, the new mom took to Facebook to share the story with others — and it's certainly left an impact. It's been shared more than 95,000 times so far, and driven home one invaluable lesson in the process: Sometimes, the most "amazing individuals" can be complete strangers, sitting right next to us.

According to her post, Garvison was afraid that her 4-month-old would inconvenience others from the moment she stepped on the plane that day. "I noticed that the two seats next to me were taken and this couple looked very annoyed and I could tell by their body language sitting right next to me that they weren't thrilled about sitting next to Rylee," she wrote. Garvison was flying with her daughter to reunite with her husband in the army, she explains, and moved to Miller's row (which had two empty seats) so she could tend to her daughter. However, once the plane started to taxi, the newborn became inconsolable and wouldn't stop crying, no matter what Garvison did. Miller's small gesture, of simply offering to hold the baby herself put the stressed mom at ease — particularly when little Rylee immediately stopped crying, and slept for the entire trip.

You will never understand how happy this act of kindness has made my family. You could've just rolled your eyes and been irritated like everyone else, but you took her and held her the entire flight and let me get some rest and peace of mind. It brought tears to my eyes while I sat there and watched you and Rylee sleeping next to me. I just couldn't believe how that ended up working out and how caring you were to us.

It's clear their time spent flying side-by-side left an impression on Miller, too, who responded directly to Garvison in her Facebook post:

I'm equally just as touched as you are, Rebekka Garvison and I can both agree how unexpected this has all been, but we're so thankful and blessed as a result of this experience! I'm happy that I could be there on that fateful morning to meet and assist your darling daughter and baby Riley [sic]. Thank you for your kindness and acknowledgment. Continued blessings to you all!

While we may not hear about them nearly as much as we should, there's no shortage of feel-good stories like this one out there. Here are three more viral stories of strangers stepping in to lend kids and parents a hand that'll restore your faith inhumanity:

On a trip to Philadelphia from Orlando last year, Shanell Mouland dreaded how her three-year-old daughter with autism might endure the two-and-a-half hour flight. But thankfully, a fellow passenger named Eric Kunkel made the journey so much easier. When the little girl, named Kate, began reaching out for him and calling him "Daddy," Kunkel dropped everything and did something amazing: He acknowledged her — something Mouland says can be pretty rare. In a blog post titled "Dear 'Daddy' in Seat 16C Flight 1850 From Philly," the mom later thanked Kunkel for treating her daughter like a person, as well as playing with her when most people would've ignored her.

"You could have shifted uncomfortably in your seat," she wrote. "You could have given her that smile that I despise, because it means 'Manage your child, please.' ... Thank you for entertaining Kate so much that she had her most successful plane right yet. And thank you for putting your papers away and playing turtles with our girl."

The Internet has a way of amplifying good deeds, and it's a good thing, too, since this story may not have gained popularity otherwise. Last year, an Imgur user claimed that while leaving the hospital one day, her daughter confided in her that a classmate was bullying her because of her "disgusting" shoes. Overhearing the conversation, a kind stranger felt compelled to act. "On the way to the elevator, a man chased us down, and handed us this. I refused - he insisted, saying 'he had more than enough.' I started crying, and thanked him so much," the anonymous mom wrote. Not only was she able to get her daughter some dapper shoes, but the money left over scored her some much-needed leggings too.

The Time A Terminally-Ill Boy's Bucket List Was Checked Off, Thanks To The Kindness Of Hundreds Of Strangers

In August 2014, at just five-years-old, doctors told Liam Myrick's parents that he may not make it to his next birthday. The Missouri boy had a neuroblastoma, and soon after underwent 14 grueling rounds of chemotherapy. While they kept friends and extended family updated on Liam's condition, his parents also decided to make personal bucket list public — though they never could have anticipated the outpouring of support they would receive in the process. The story caught the attention of philanthropist and cancer survivor Rick Pantele, who put together a California dream vacation for the family. He wasn't the only one to support the five-year-old's dreams, though: A GoFundMe page created by Pantele also received $50,000 in donations, quickly making his bucket list a reality.

I'm sure if you asked any of these good Samaritans about their random acts of kindness, they'd say what they did was small. But the truth is, their stories are proof that even the smallest actions can make a big difference in someone else's life — and that's as good a reminder as any that we need more just like them.

More like this
I Spent 2 Years Trying TikTok’s Dating Advice
By Kailynn Johnson
Ashamed Of Your Screen Time Stats? Here's How To Change That
By Alexis Morillo
Learning To Love, Not Judge, The Lunchbox Wives Of TikTok
By Esther Zuckerman
How To Turn Off TikTok Profile Views So You Can Stalk Other Accounts In Secret
By Alexis Morillo
Get Even More From Bustle — Sign Up For The Newsletter
From hair trends to relationship advice, our daily newsletter has everything you need to sound like a person who’s on TikTok, even if you aren’t.