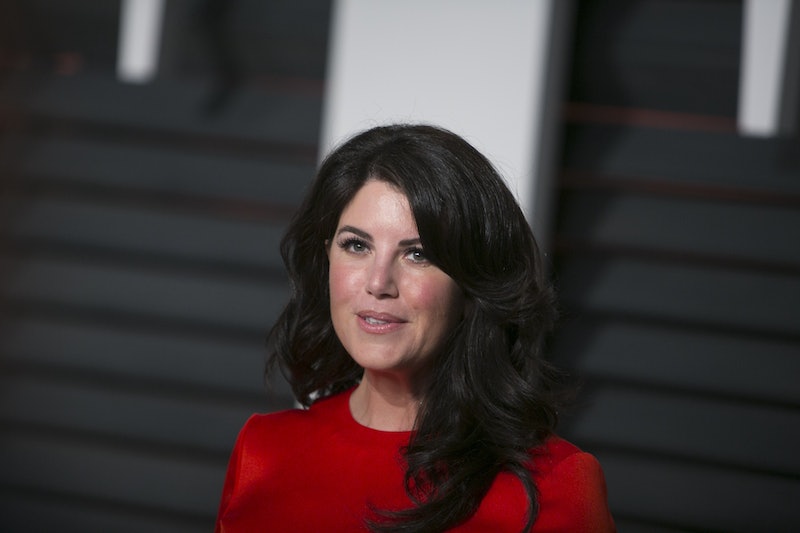 It's been two decades since we first heard the name "Monica Lewinsky." The former White House intern's infamous affair with President Bill Clinton back in 1995 landed her on the front page of every newspaper in the country (if not the world) and made her both the subject of national criticism and the butt of every late-night talk show joke. But the now-42-year-old has returned to the public sphere yet again, determined to turn her experience into a positive and help others at the same time. As she shared on Good Morning America this morning, Lewinsky is helping to launch the anti-bullying campaign #MonthOfAction, which challenges the public to take simple steps to reduce cyberbullying and its influence.

It's safe to say that if anyone knows what it feels like to be on the receiving end of harsh public bullying, it's Monica Lewinsky. And that's probably why she was hired on as a strategic advisor to Bystander Revolution, an organization which aims to "take the power out of cyberbullying." The #MonthOfAction campaign, which is also being promoted by celebs like Selma Hayek, Michael J. Fox, and Rashida Jones, asks Instagram, Facebook, and Twitter users to participate in activities that will inform them about the realities of cyberbullying, as well as how to treat others online. The most active participants are entered into several raffles, which can land them tickets to this year's Jingle Ball concert. Valuing inclusiveness, the initiative is also working with groups like the Gay & Lesbian Alliance Against Defamation (GLAAD), MTV's Look Different, The Bully Project, and the Crisis Text Line to expand their reach.

This morning on Good Morning America, the former White House intern reflected on the controversy that ruined her reputation at the young age of 24, and spoke out about how she's using her new platform to deconstruct an online climate that perpetuates both bullying and humiliation. After a decade-long healing process, Lewinsky added that she's grateful that she no longer has to hide from the world, and can say her name without fear of embarrassment. "Even though I have suffered from shame, I am not ashamed of who I am," she told Amy Robach.

Lewinsky claims she was inspired to act following the tragic death of Tyler Clementi back in 2010. The Rutgers college student and accomplished violinist had recently discovered he'd been recorded by his roommate during an encounter with another man. The intense personal shame that followed led the 18-year-old to commit suicide by jumping off the George Washington Bridge soon after. As Lewinsky admitted to Robach, she couldn't help but see shades of herself in Clementi's story — after all, she even briefly considered taking her own life.

Advocacy groups believe that the mob mentality behind cyberbullying is what makes it so dangerous. Even when a teen doesn't partake in the practice, it's very likely that they have seen it happen to someone else and took no action, creating a culture that is never addressed. "We need to return to a long-held value of compassion – compassion and empathy," Lewinsky told Robach. "Online, we've got a compassion deficit, an empathy crisis."

As for her role as Bystander Revolution's strategic advisor, this isn't exactly a new gig for Lewinsky. She's been combating the effects of public and online shaming for some time now. Back in March, Lewinsky conducted a TED Talk on shaming that was viewed over five million times. The comments were so polarizing that a writer for the organization penned an article on how many users missed the point of Lewinsky's speech and did the very thing she was speaking out against.

But according to Nadia Goodman, who supervised the comments for BR, Lewinsky had a pretty thick skin: "People called her a slut and a whore, made jokes about sucking d*ck, and said she deserves the shaming because shaming is an important part of how we shape our culture." Seeing what Lewinsky faces on a daily basis, Goodman wrote that she became emotional. "I can only begin to imagine how profoundly these hateful comments must have shaped her self-worth," she continued. "We all find our self-esteem shaken when we feel insulted or disrespected. But to have the entire world insult you to your face — for 17 years straight? That’s abuse on another level."

But despite all the vitriol being hurled around after her TED talk, Lewinsky dropped some undeniable truth bombs in her speech. Standing before the crowd, she said:

For nearly two decades now, we have slowly been sowing the seeds of shame and public humiliation in our cultural soil, both on- and offline. Gossip websites, paparazzi, reality programming, politics, news outlets and sometimes hackers all traffic in shame. It's led to desensitization and a permissive environment online which lends itself to trolling, invasion of privacy, and cyberbullying.

So what can we do about it? Lewinsky is the first to admit that the remedy won't be easy. But it starts by taking ownership and responsibility over our words. "It's all about forming habits of action," she said. "So a little bit of kindness, a little bit of courage, a little bit of inclusion and we can really start to shift the culture and take the power out of bullying."

Lewinsky isn't all talk, either. So far, she's leading this shift by example, working with student youth ambassadors to help victims of bullying. And by retelling her own story in her own way, she's showing others that nobody's livelihood is set in stone. But most importantly of all, Lewinsky is proof that ultimately our own image is just that: our own.

More like this
Watch Jacinda Arden’s Devastatingly Honest Resignation Speech
By Sam Ramsden
Ashamed Of Your Screen Time Stats? Here's How To Change That
By Alexis Morillo
Annie Rauwerda Finds Treasure In The Depths Of Wikipedia
By Chloe Foussianes
Learning To Love, Not Judge, The Lunchbox Wives Of TikTok
By Esther Zuckerman
Get Even More From Bustle — Sign Up For The Newsletter
From hair trends to relationship advice, our daily newsletter has everything you need to sound like a person who’s on TikTok, even if you aren’t.