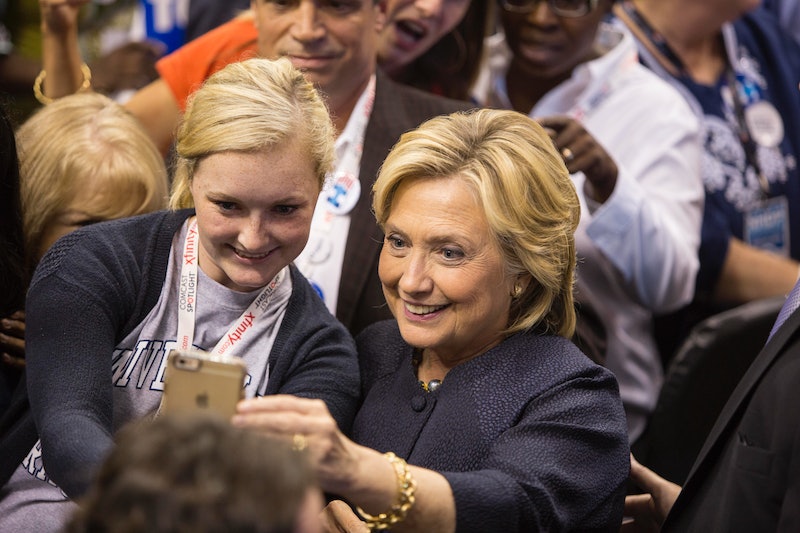 Wednesday marked the release of 6,300 more pages of Hillary Clinton's emails from her time as Secretary of State. Three were considered "secret" by the State Department — the second-highest government classification — and countless more were considered hysterical by readers across the country. Most are to or from Clinton's closest advisers, but the occasional outsider made it to her inbox too. Forward upon forward upon, yes, another forward can finally get your email to HRC herself.

The State Department released the emails as a part of a court order stemming from her use of a private email account during her time with the Department. Most revelations this time around were relatively benign: Clinton is a big fan of Harriet Tubman and she also gets annoyed on road trips when NPR fades out of range. Not to mention that she would be a terrible prank caller (Elton, it's her, really!).

"H," aka hrod17@clintonemail.com, aka HDR22@clintonemail.com, aka Madame Secretary, doesn't email with just anyone. The vast majority of her messages are with her inner circle, interesting articles, compliments, and policy memos. But the occasional email chain includes outsiders too. How can you get your name out there with a FOIA request in the future? Hope the email chain gets forwarded to the woman in charge.

It helps to have friends in high places! And even more so if they have friends in even higher places. A young high school student sent her or his resume to Capricia Marshall, who at the time was the Chief of Protocol at the State Department (Marshall was in charge of informing Pres. Obama, V.P. Biden and Sec. of State Clinton on etiquette, addressing foreign diplomats correctly, etc. — one title this position is assigned is "Ambassador," so the student had the title right).

In addition to her official duties, Marshall tried to connect at least one high achieving student up the chain. Marshall sent the resume on to Clinton's right-hand adviser Huma Abedin (who, if you remember, is still married to Anthony Weiner — his scandal is also the subject of emails). What we do know is that he or she was hoping to attend Georgetown and the timing would have the student graduating June 2015.

If you applied for a job at State, there's a good chance you're in these emails as a whited-out box. No doubt you were a stellar candidate and I hope you got the job — although, I'm afraid to say, there were many of you. I hope you weren't this guy that Clinton forgot!

Evidently Hillary Clinton watches movies, just like you and I — well, almost like you and I. You and I might see a movie poster or consider Oscar nominations when deciding what to watch. Clinton, on the other hand, gets personal appeals from Hollywood big shots, or at least one in particular. Movie producer Harvey Weinstein also emailed Marshall, who in turn forwarded the message to Clinton about his new movie The King's Speech. He noted that Clinton had loved Shakespeare in Love, so he hoped she would enjoy this one too, especially because "Hillary would approve because it's PG-13 with not too many swear words."

In a cute shout-out from a grammar school friend, Clinton is sent an op-ed from the Daily Herald, a newspaper covering her hometown of Park Ridge and other Chicago suburbs, about the 90th anniversary of the 19th Amendment and women being given the right to vote. Adorably, the subject is "She's still our Park Ridge Girl!!" in reference to a later mention of Clinton in the article as an accomplished female politician: "Now, of course, we also have Secretary of State Hillary Clinton, who hails from Park Ridge." Clinton and Betsy Ebeling have been friends since childhood.

Much like us, Clinton goes out for drinks. And she crosses her fingers. In reference to a poll on the UK elections in May 2010, Clinton says she has her fingers crossed for a Labour victory and that she just had drinks with Miliband, who it's safe to assume is David Miliband, who was serving as Foreign secretary (the equivalent of Secretary of State) for Britain's Labour Party, the mainstream center-left British party often in step with American Democrats on policy issues. Sadly for Hillary, the Conservatives won the election. Another person lucky enough to get drinks with then Secretary of State Clinton? Jack Keane, a retired four-star general and defense analyst. Clinton asked her aides to set up drinks with him in June 2010.

Clinton surely wishes the federal government had switched to Gmail like the rest of us. Lucky for Republicans (and for those of us who enjoying the funnier of her exchanges), that is not the case.