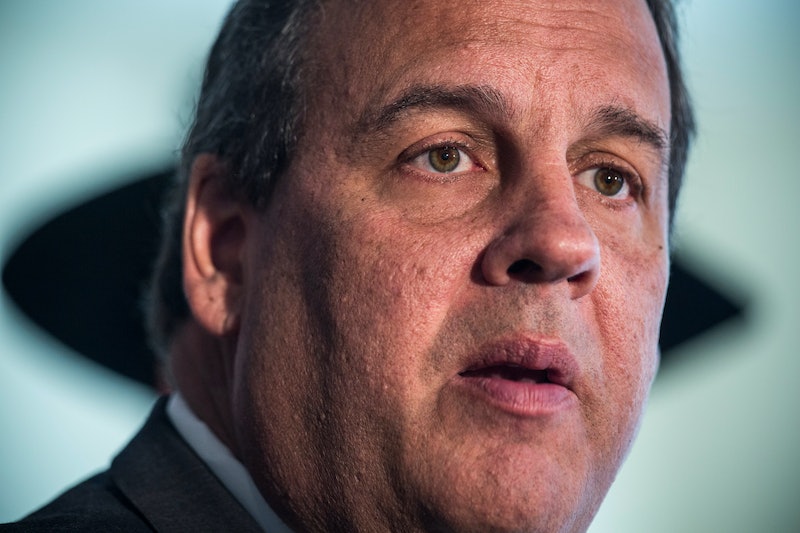 A few days ahead of Hurricane Joaquin's projected landfall in the U.S., Chris Christie has declared a state of emergency for the state of New Jersey on Thursday. Joaquin was upgraded to a Category 3 storm on Wednesday night and is expected to continue intensifying as it makes its way over the Bahamas on Thursday evening before heading for a possible landfall in the eastern U.S. While meteorologists have said that it's too early to tell whether Joaquin will make landfall, strong winds, heavy showers, and flooding are expected on the East Coast nonetheless. In issuing a state of emergency, Governor Christie is preemptively preparing his state for any potential damage caused by the storm. (Update: Hurricane Joaquin strengthened to a Category 4 hurricane on Thursday afternoon.)

Hurricane Joaquin is currently just east of the central Bahamas but its projected path will see it heading toward the eastern coast of the U.S. by Friday. According to meteorologists, it's continuing to pick up speed and intensity and could bring potentially historic rainfall for Georgia, the Carolinas, and Virginia. In preparation for the storm's impending arrival on the East Coast, Christie held a press conference to announce that he was declaring a state of emergency for New Jersey, saying, "Many of us have been through this before, with Irene and with Sandy." He advised residents to prepare accordingly and said he will consider evacuations if it's deemed necessary.

Christie is not the only governor to have issued an emergency status for his state. On Wednesday, Virginia Gov. Terry McAuliffe declared a state of emergency for his state, where Joaquin is expected to bring heavy rain on Thursday and Friday and a potential hurricane over the weekend. The same day, Gov. Pat McCrory made the same declaration for North Carolina, where a separate storm system has already dumped substantial rain. McCrory said in a statement:

We've had a fair amount of rain during the past week and the ground is saturated in many places. The combination of wind gusts from various weather systems and any additional rain from Joaquin could lead to downed trees and power outages in many areas, not just the coast.

Other states along the east coast could make similar declarations in the next two days as meteorologists, officials, and residents alike keep their eye closely on Joaquin's progress.