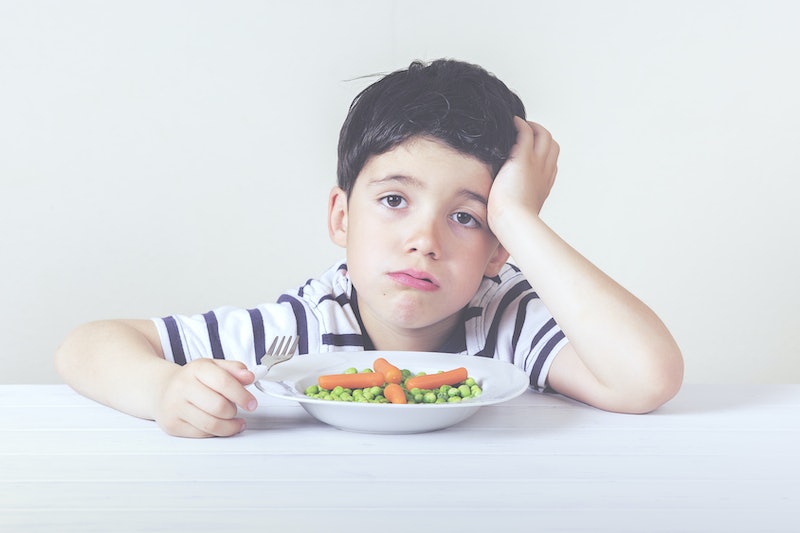 If you've got a picky eater at home, fear not. A new study out of Texas A&M University may be able to help you trick your kids into eating their vegetables. Researchers studying food waste at elementary schools recently discovered something very interesting: Kids kinda hate broccoli. Just kidding; we already knew that. But it is nice to hear that there's official scientific proof now. For what it's worth, experts found that the five most popular "vegetables" in the study were mashed potatoes, french fries, tater tots, corn on the cob, and whole kernel corn. (I know, I know, technically french fries and tater tots aren't vegetables. But hey, they do contain potatoes?) But when digging deeper, they turned up a surprisingly easy way to make veggies like broccoli, string beans, and even asparagus seem more appealing — by simply paying attention to what else was on the plate.

For the study, particularly close attention was paid to entree/vegetable pairings, and whether pairing a vegetable with a different entree had any bearing on how much of the vegetable was consumed. For example, researchers looked at which foods were left on the plate after school kids were served burgers for lunch, an entree known to be popular. Here's what they found:

Translation: A kid's opinions on a particular food can change depending upon what it's served with. When kids were served popular entrees like burgers or chicken nuggets, they tended to eat more of the mains and waste more of the vegetables. But when paired with less popular entrees, such as sunbutter sandwiches or deli sliders, those same veggies started to look a little bit tastier.

Now, some of this isn't totally groundbreaking. After all, it makes sense that kids would gravitate towards the best-tasting item on the plate. But here's the interesting part: The purpose of the study wasn't actually to figure out how to get the kids to eat their vegetables; it was to learn how to minimize food waste in school lunches. In doing so, researchers stumbled upon the conclusion that in order to minimize waste, entrees and vegetables of similar popularity should be paired together. According to the study authors:

So if you're looking to get your kid to waste less food, be sure to pair their entrees and veggies accordingly. Nobody's touching that broccoli if you serve it alongside chicken nuggets, even if you use dinosaur-shaped nuggets and pretend the broccoli florets are trees (trust me, I've tried). But pair the broccoli with a less exciting entree (perhaps meatloaf?), and you just might have a shot.

And if that fails? Here are some other expert-approved tips for dealing with picky eaters, according to the Mayo Clinic.

Offer The Right Amount Of Food At The Right Times

Don't force your child to eat when they're not hungry. Encouraging them to clean their plate can create food-related power struggles. But on the flip side, don't allow them to graze all day, or to fill up on juice or milk. If they're snacking too much in between meals, they won't have room for the good stuff.

New foods should be introduced in a variety of ways. If your child didn't like canned carrot slices, try raw baby carrots. If apples aren't working out, try offering slices with peanut butter or honey. Cookie cutters can make food more fun, and it only takes a moment.

Get The Kids Involved In The Process

Ask your child to help you select produce at the supermarket. Have them help you prep for dinner. Even toddlers can help with stirring, or chop vegetables with a plastic knife and some supervision. Kids are more likely to to eat something they chose or helped prepare themselves.

More like this
The 5 Best SLS-Free Toothpastes, According To Dentists
By Amy Biggart and Danielle Calma
Got Brain Fog? Here Are The Best Supplements For Memory & Cognition
By Carolyn Steber
TikTok's Butter Board Might Be The New Cheese Plate
By Emma Carey
Deliveroo Is Selling Lotus Biscoff Cinnabons Now
By Darshita Goyal
Get Even More From Bustle — Sign Up For The Newsletter