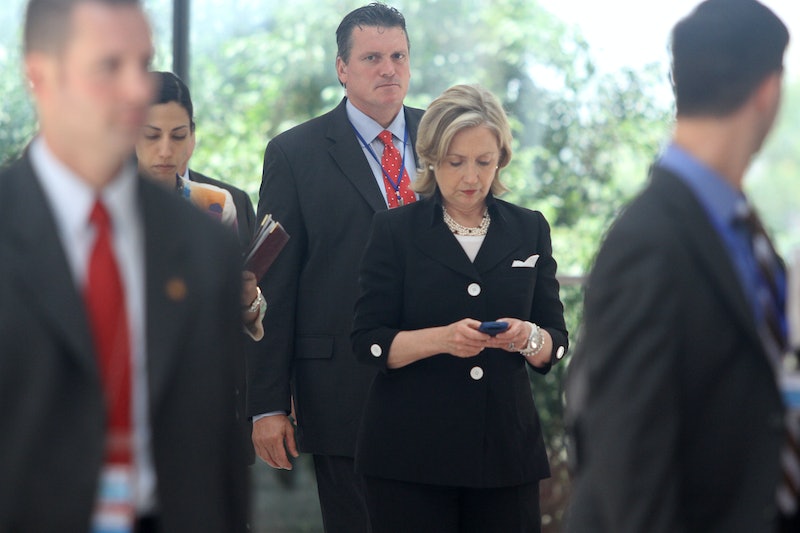 Among the more interesting things in the latest batch of Hillary Clinton's emails released this week are the news stories that Clinton's aides wanted her to read. Included among the 6,300-page sample of email correspondence sent to and from Clinton's private email servers are recommendations from aides and confidantes on articles that the former secretary of state should pay attention to. And because the news stories cover everything from unfair assessments of Clinton's clothing choices to data on global health for women and babies, they're news stories that you should read, too.

The State Department on Wednesday made public another roughly 4,000 emails from October 2010 and September 2011 while Clinton was secretary of state. And, just like most email traffic between work colleagues, the messages range from the mundane to the comical. Admittedly, some of the email subject lines are pretty funny, as is Clinton's quest to understand what FUBAR means, but they offer no more smoking guns than the prior four batches of emails.

But what the emails do offer is an interesting, behind-the-scenes look at how Clinton and her aides used national and international news stories to help in conversations with other world leaders. I mean, who would imagine that a small story about university students protesting Sabra hummus would make it to the secretary of state's inbox? Check out these seven news stories from Clinton's inbox to see what I mean.

Adviser Cheryl Mills thought she should read this rebuttal of reality-TV star and fashion guru Tim Gunn's criticism of Clinton's fashion decisions. The piece that Alyssa Rosenberg penned for Think Progress is definitely one you should read, too. Rosenberg makes the point that as secretary of state, Clinton had to pay attention to what was diplomatically and normatively appropriate. Her clothes couldn't be all about sex appeal. And really, why should they be?

And in another email from "Gunn-gate" (I just totally made that up), Mills made sure that Clinton saw a Huffington Post article applauding her "feminine style statement" in photos from a visit to the Norwegian embassy. After Gunn said that Clinton's fashion sense was "gender confused," it was probably nice to read about how "spiffy" she looked that day.

Yes, There Is A Vast Right-Wing Conspiracy

Referencing Clinton's famous assertion that conservatives were colluding to bring down her husband's presidency, confidant Sidney Blumenthal wanted to make sure she saw this New Yorker article about the billionaire Koch Brothers' anti-Obama campaign using the Tea Party.

You Are What You Eat, I Guess

Before meeting with Prime Minister Benjamin Netanyahu in 2011, Clinton had to be briefed on a student-led push to get Sabra hummus out of DePaul University cafeterias. The Associated Press reported at the time that a student organization was concerned that Sabra profits supported Israeli military units accused of human rights abuses.

Even Better Piece — Read It

Even though the House passed a stopgap measure this week to continue funding the government — and Planned Parenthood — through December, we can be sure that the battle over funding is far from over. Former Clinton speechwriter Lissa Muscatine agreed and suggested Clinton read this Salon article on reframing the Planned Parenthood debate to focus not just on abortion access, but on the immorality of denying women access to life-saving cancer and STD screenings.

How Lucky We Are

Each year, Save The Children reports on differences in health and opportunities for wealthy and poor mothers. Slaughter sent Clinton and several members of her staff a link to a Foreign Policy photo essay once the 2011 report was released as a reminder of how important their work was. The 16th Annual State of the World's Mothers report is available now and offers a sobering picture of health disparities faced by the world's poorest women and children.

To Brighten Your Day/Week

Even Hillary Clinton gets the blues, I suppose. Perhaps that's why Director of Policy Planning Anne-Marie Slaughter thought it important to point the former secretary of state toward this bit of good news from the Millennium Project's 2011 State Of The Future report. According to the study's authors, improvements in global literacy, poverty, and healthcare over the past 20 years offer good evidence that overall the world is rapidly becoming a better place.

As ordered by a federal judge, the State Department will make a new batch of Clinton emails public every month until January 2016.

More like this
Watch Jacinda Arden’s Devastatingly Honest Resignation Speech
By Sam Ramsden
Prince Harry Incorrectly Recites Christina Aguilera’s “Genie In A Bottle” Lyrics
By Jake Viswanath
What The UK Blocking Scotland’s Gender Recognition Bill Means
By Sam Ramsden
24 History-Making Black Women You Probably Didn't Learn About In School
By Ayana Lage and JR Thorpe
Get Even More From Bustle — Sign Up For The Newsletter
From hair trends to relationship advice, our daily newsletter has everything you need to sound like a person who’s on TikTok, even if you aren’t.