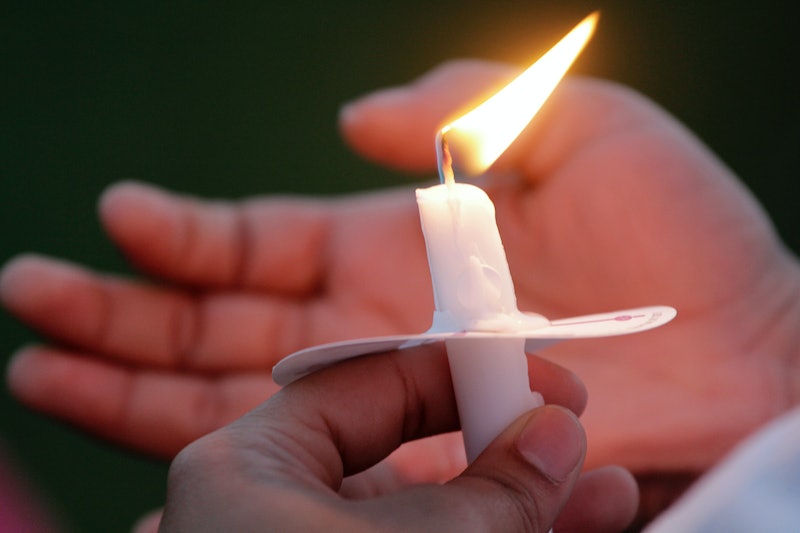 If you're wondering what you can do to help Umpqua Community College shooting victims right now, you aren't alone. The #UCCShooting hashtag quickly began trending on Twitter Thursday afternoon, as users expressed an outpouring of support and concern for the victims and their families. CNN reported that at least 10 people have been killed and at least 20 were wounded during a the massive shooting. While little information has been made public about the perpetrator, Douglas County Sheriff John Hanlin confirmed to reporters that the shooter had been killed, and that the school is no longer in active shooter status. Update: For an updated list of funds where you can donate to help the victims, click here.

Update: On Friday, it was confirmed that there were nine victim fatalities and that Mercer killed himself after Thursday's mass shooting at Umpqua Community College. On Saturday, there were reports that Mercer handed out a box to a fellow classmate that possibly contained his final note. The note that Mercer left detailed his depression and loneliness. In an interview with CNN on Saturday, Mercer's father wondered how his estranged son was able to obtain 13 guns. Mercer was a student at the college and was enrolled in the writing class where he opened fire. He previously attended a school for mentally unstable children and was briefly enrolled in the U.S. Army in 2008, before he was kicked out a month in for not demonstrating the basic administrative standards required to serve. All of his gunswere purchased legally.

Hanlin also confirmed that ambulances are treating students on the campus, as well as transporting victims to area hospitals. Identities of the victims have not yet been made public, though CNN reported that multiple victims had been found in multiple classrooms in UCC's Snyder Building. In addition, NBC News reported that at least one woman was shot in the chest.

Sheriff Hamlin also said that what the public should do right now is "just think about the families first." While more specific charities and organizations dedicated to supporting victims are sure to crop up in the coming days, here are several ways you can offer immediate and meaningful support to those affected by the shooting at Umpqua Community College.

In the wake of a mass shooting, victims often need blood transfusions. So the local Red Cross chapter will likely need more support over the coming days. If you live near the UCC campus, you might consider making a donation at the Roseburg Blood Donation Center at 1176 NW Garden Valley Boulevard in Roseburg, or head to the one in nearby Eugene. While you can call ahead at 1-800-RED-CROSS to make an appointment, a Red Cross spokesperson tells Bustle that walk-in donations are also welcome during times of crisis.

Give Mental Health Support To Those Who Need It

It takes an entire community to heal from the psychological trauma of a mass shooting, as we saw in the aftermath of the horrific events in Sandy Hook, Charleston, and hundreds of other tragedies. The shooting at UCC could cause those who have lived through gun violence to need extra mental health support. You can help victims of the UCC shooting and other incidences of gun violence by listening, being supportive, and helping them connect with local mental health resources, wherever possible.

As more information is made available about the victims of the UCC shooting, it's likely that online appeals and donation pages will be launched to help the students, faculty, and families affected. The BBB Wise Giving Alliance has information for donors about finding safe ways to give online after a disaster, as well as the criteria to look for when deciding which nonprofits to support.