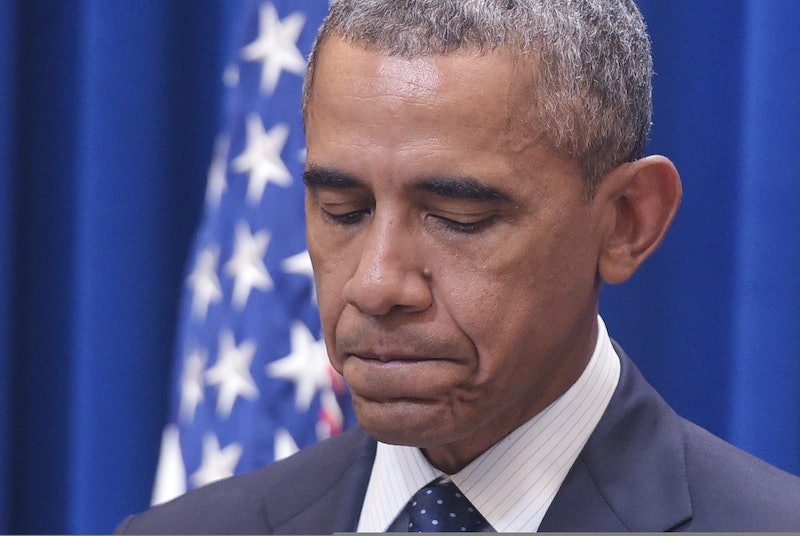 On Thursday afternoon, President Obama delivered remarks on the devastating Umpqua Community College shooting, which took place earlier that day. Looking weary, Obama was forced to deliver a version of the same speech he has given many times since taking office in early 2009. He's expressed his sincere sympathy for the victims and their families, emphasized the need for comprehensive gun reform, and expressed his hope that there will be no more tragedies like this one. Unfortunately, without the reasonable gun control reform the president has pushed for for years, statistically, there will be more.

Obama's most famous gun control speech took place in the Rose Garden in the aftermath of the Sandy Hook shooting, which left 20 children and six adults dead. The president's most fervent attempt to instigate real gun control came in the spring of 2013, but was rejected in the Senate. Furious and devastated, Obama said, "I’ve heard some say that blocking this step would be a victory. And my question is, a victory for who? All that happened today was the preservation of the loophole that lets dangerous criminals buy guns without a background check. That didn’t make our kids safer.”

This is the 15th time Obama has spoken following a mass shooting.

In the coming days we’ll learn about the victims: young men and women who were studying and learning and working hard. Their eyes set on the future, their dreams on what they could make of their lives.

But, as I said, just a few months ago, and I said a few months before that, and I said each time we see one of these mass shootings. Our thoughts and prayers are not enough. It’s not enough. It does not capture the heartache and grief and anger that we should feel. And it does nothing to prevent this carnage from being inflicted some place else in America next week or a couple of months from now.

We don’t yet know why this individual did what he did. And it’s fair to say that anybody who does this has a sickness in their minds, regardless of what they think their motivations may be. But we are not the only country on earth that has people with mental illnesses or want to do harm to other people. But we are the only advanced country on earth that sees these kind of mass shootings every few months.

Then, Obama referenced the time he gave a speech about mass shootings and how they needed to be prevented, and a mass shooting happened just later that day at a movie theater in Louisiana.

Somehow this has become routine. The reporting is routine. My response here at this podium ends up being routine. The conversation in the aftermath of it … we’ve become numb to this.

He listed a myriad of mass shootings that have happened in the United States.

It cannot be this easy for someone who wants to inflict harm on other people to get his or her hands on a gun.

One of the other big things that Obama talked about was how, even despite these mass shootings and rising death tolls, there will be those who shout "Don't take my guns."

Right now I can imagine the press release is being cranked out. We need more guns, they’ll argue. Fewer gun safety laws. Does anybody really believe that?

There is a gun for every man, woman, and child in America. So how can you, with a straight face, argue that more guns will make us safer?

Obama soon got even more personal, saying, "We collectively are answerable to those families who lose their loved ones because of our inaction." He mentioned that, generally, when something is unsafe, we work to change that. If Americans are killed in a flood other other disaster, we make those communities stronger. If a road is unsafe, we fix it. We have seat belt laws, he said, because we know they save lives.

But the notion that gun violence is somehow different? That our freedom and our Constitution prohibits any modest regulation of how we use a deadly weapon? … Doesn’t make sense.

So, tonight as those of us who are lucky enough to hug our kids a little closer … I’d ask people to get our government to think about how they can change these laws and save lives and let young people grow up. And that will require a change of politics on this issue. That American people, individually, whether you are a Republican, Democrat, or Independent, when you decide to vote for somebody, that you are making a determination that this cause of continuing death for innocent people should be a factor in your decision.

If you think this is a problem, then you should expect your elected officials to reflect your views.

I would particularly ask America’s gun owners who are using those gun properly, safely, to hunt, for sport, for protecting their families, to think about whether your views are properly being represented by the organization that suggests its speaking for you.

And each time this happens, I’m going to bring this up. Each time this happens, I’m going to say that we can actually do something about it, but we’re going to have to change our laws. And this is not something I can do by myself. I’ve got to have Congress, state legislatures, governors, who are willing to work with me on this. I hope and pray that I don’t have to come out again during my tenure as president to offer my condolences to families in these circumstances. But based on my experience as president, I can’t guarantee that. And that’s terrible to say. And it could change.

May God bless the memories of those who were killed today.